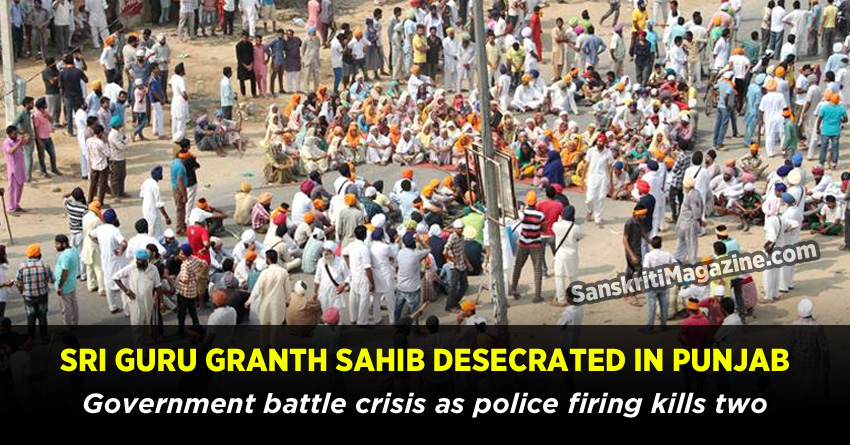 Badal appealed for calm and called the desecration “a deep-rooted conspiracy aimed at inciting communal tension and destabilising the peace in Punjab”.

Two people were killed in police firing Wednesday as protests over the alleged desecration of a Sri Guru Granth Sahib spread to several villages in Fardikot.

About 80 people were injured when police used teargas, lathicharge and fired in the air to disperse a dharna by Sikhs at Kotakpura chowk in Faridkot early Wednesday. Later in the day, police fired to disperse protesters in village Behbal Kalan, killing two men, Bittu Singh and Krishan Singh. A third man was admitted to hospital with bullet wounds.

Punjab Chief Minister Parkash Singh Badal ordered a judicial inquiry into the alleged desecration of the Sikh holy text and the violence that ensued, while Deputy Chief Minister Sukhbir Singh Badal announced a reward of Rs 1 crore for anyone who provides information leading to the arrest of those who desecrated the text.

Badal appealed for calm and called the desecration “a deep-rooted conspiracy aimed at inciting communal tension and destabilising the peace in Punjab”.

The violence, which has created a fresh political crisis for the Shiromani Akali Dal (SAD),comes against the backdrop of a controversial pardon by the Akal Takht — the highest temporal seat of the Sikh community — to Dera Sacha Sauda chief Gurmeet Ram Rahim Singh. The Dera chief, accused of hurting Sikh religious sentiments after wearing an attire allegedly similar to that of Guru Gobind Singh in 2007, was pardoned on September 24 this year.

The pardon by head priests of the five takhts — widely regarded as government proxies — has been criticised by several Sikh groups, including radical organisations, who see it as a pre-election move by the SAD to keep the Dera on its side.

On Wednesday, there was widespread anti-Dera mood among protesters.

Torn pages from the holy book were found in village Bargadi on October 12. Shiromani Gurdwara Parbandhak Committee president Avtar Singh Makkar Tuesday said the torn pages were from the Guru Granth Sahib that had been stolen from Burj Jawahar Gurdwara, adjacent to Bargadi, in June.

After the text was stolen, an anonymous handwritten note had been pasted in Burj Jawahar, claiming that the stolen Guru Granth Sahib was with the writer of the note, which ended with “Dhan Dhan Satguru” — an invocation used by Dera followers.

As allegations flew, the Dera chief Wednesday issued a swift denial on Twitter. Prefaced with the hashtag #MSGRespectAllReligion, he tweeted that the Dera condemned the desecration, and that those who did it were “sinners (paapi)”.

Meanwhile, the United Akali Dal, the Sikh Sangharsh Committee and the Simranjit Singh Mann-led Shiromani Akali Dal (Amritsar), along with other Sikh organisations, called for a complete bandh in Punjab Thursday.

SAD (Amritsar)’s Faridkot district acting president Surjit Singh said, “The leaders of various Sikh organisations met at an undisclosed location to avoid police crackdown. The bandh call is dedicated to the two Sikh martyrs killed today. The Sikh organisations also decided to seek the intervention of the Supreme Court, the President and the Prime Minister.”

In a delicate balancing act, the SAD sought to assuage flaring tempers in the Sikh community. The party issued a press statement in the evening, welcoming the release of TADA detainee Waryam Singh from Bareilly jail and urging the Union government to release remaining Sikh detainees as well. It also praised efforts made by the CM and the SAD president in this direction.

Former SGPC secretary Manjit Singh Calcutta said pardoning the Dera chief was a political mistake. “There has been rebellion in Sikh ranks over the issue. For Dera votes, Badal has turned the Sikh Panth against himself and the SAD. Badal should have understood that when the Dera chief could not make his relative win polls in 2012 assembly elections from Bathinda, what difference can Dera votes make in other segments?” he said.

~By Navjeevan Gopal — With inputs from Rakhi Jagga

Martyrdom of Mata Gujri and Younger Sahibzade in Sirhind

Sardar jokes are so cool!

When There Was A Price On Every Sikh’s Head