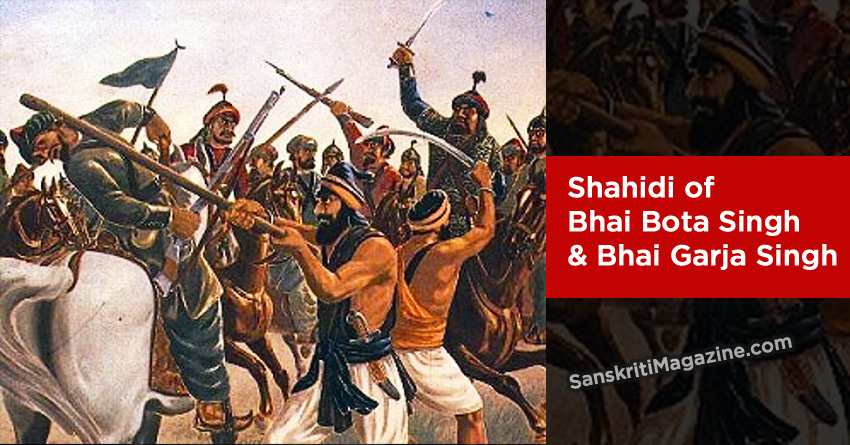 The Mughal emperor of Delhi and the Mughal governor of Lahore had taken vows to destroy the Sikhs, root and branch. Orders were given that all Sikhs-men, women, and children were to be put to death. It was declared lawful to plunder their homes and seize their property. Their houses were to be looted and plundered. They were to be haunted down like wild beasts. Not only government officials, but even notable Hindus and Muhammadans, vied with one another in this cruel campaign of loot, arson and murder. Special rewards were offered for the capture and destruction of the Sikhs.

It was announced, ‘Any parson giving information which leads to the arrest of a Sikh, will get ten gold coins. Fifty coins will be rewarded to him who brings the head of a Sikh. Eighty coins will be given to him who captures and brings a Sikh alive.’ It has to be borne in mind that eighty coins in those days would be equal to a few thousand dollars today. So, the rewards were tempting indeed. The whole machinery of the government was put into motion to crush the Sikhs. Even non-official Zamindars were made to lend a hand in this campaign of ruthless genocide. Some Zamindars used to send cartloads of heads to Lahore. This campaign was the most virulent in the Majha tract.

As a result of this fierce persecution, most of the Sikhs left the plains. They took shelter in places away from human habitations. These places were the Shivalik Hills, the Lakhi jungle, and the sandy deserts of Rajputana. The few who still chose to remain in the Majha, had to press their days in bushes and forests, here and there. Sometimes, some persecutors and evil wishers of their would boast that the Sikhs were afraid to appear in the plains. Such taunts would cause some daring Sikhs to come out of their hiding places, and make their presence known and felt.

One such daring Sikh was Bhai Bota Singh. He was a GurSikh of Bharana, now in Pakistan. He had a companion named Bhai Garja Singh. They used to come occasionally to Amritsar at night in order to bathe in the sacred tank. They spent the rest of the day in the bushes near Taran Taaran. Bhai Bota Singh was a deeply religious man. He passed his life in reciting the Guru’s sacred hymns and meditating on God. By nature, he was a peace loving saint. But, at the same time, he could be a mighty soldier, if necessary.

It was toward the end of 1739, when one day, a party of wayfarers noticed Bhai Bota Singh and his companion near Nurdi. The two were returning from a secret pilgrimage to the darbar Sahib at Amritsar.

‘Look There’ said one of the wayfarers, ‘there goes the pair of Sikhs’. ‘O , no’, said another. ‘They can’t be Sikhs. there is no Sikh left anywhere in the neighborhood. All of them have been either killed or driven away. Zakriya Khan has proudly proclaimed that he has exterminated the Sikhs that no Sikh exists in the Punjab.’

But, said the first man, ‘I am sure that they are Sikhs.’

‘In that case,’ said the other, ‘they must be a pair of cowards, jackals, hiding about to save their skins. The Sikhs are not subject to such fears.’

These taunting remarks stung Bhai Bota Singh. A Singh of Guru Gobind Singh was, to him, as brave as a lion. That a Singh or lion should be called jackal was more than he could stand. The Guru’s Khalsa, he felt, could not be exterminated. Zakriya Khan must be made to realize that his boast was empty, that the Khalsa was in existence and would ever continue to exist, in spite of all that he and his ilk might do.

Indeed, the taunt awoke the soldier in that saint. He decided to come out into the open, make his presence felt, by Zakriya Khan and his government, and to maintain the prestige of the Khalsa. His companion was of the same view.

Bhai Bota Singh and his companion came out from the bushes. They took their position on the then Grand Trunk Road near Nurdi, a few miles west of Taran Taaran. In those days, this road connected Delhi and Lahore. As mere bravado and show of courage, Bhai Bota Singh began to collect toll tax of one anna per cart and one pice per donkey load. None dared to refuse his demand. All paid it readily and quietly.

Nobody dared make a report to the government. Their weapons were big sticks cut from kikkar trees. This went for some time. Bhai Bota Singh’s presence was, no doubt, felt by those who used the Grand Trunk road. But it had not yet been felt by the government. Bhai Bota Singh did not like it. He had not taken this position merely for collecting toll. His object was only to prove to the fanatical rulers that, in spite for their all-out effort to exterminate the Sikhs, the Sikhs were still very much in existence. Therefore, he wrote direct to the governor, Zakriya Khan, at Lahore, announcing himself and the tax he was levying on travelers. He gave it to the traveler bound for Lahore and asked him to do deliver it to the governor there. The traveler undertook to do so. The letter was, of course, in Punjabi. Its words were as follows:

In English the words would read:

“Thus writes Bota Singh a letter,
With a big stick in hand, on the road I stand,
Levying an anna for a cart, And pice for a donkey load.
Tell sister-in-law Khano,
That this is a message from Bota Singh.”

The letter was a clear and daring challenge to the governor. He was red with rage. Immediately he, sent a detachment of on hundred fully armed horsemen under the command of Jalal Din, to arrest Bhai Bota Singh. On approaching Nurdi, they saw the two Sikhs standing on the road. They held big kikar sticks in their hands. They had no other weapon; no axe, no lance, and no sword. Approaching them, Jalal Din called upon them to surrender.

Bhai Bota Singh replied, ‘Sikhs know no surrender. We are not used to that sort of act. You would certainly like very much to take us alive to your governor and earn his good opinion. He would like very much to see me cut into pieces, limb by limb, like Bhai Mani Singh. But we refuse to oblige you and your governor. We shall give up our lives, but we shall charge a heavy price for them. We shall die fighting. But we shall kill many before we die. Come on, and taste our big sticks. Send four of your best strongest swordsmen against us two big-stick wielders. Come on ! “Sat Sri Akal”.

Jalal Din sent four his bravest and strongest soldiers. He said to them, ‘Fall on these beasts, and fell them with your sharp swords.’

They advanced, crying, ‘Ya Ali’.

Bhai Bota Singh and Garja Singh struck them repeated blows with their big sticks. Thus thrashed, the four Mughals soldiers were fell to the ground. Another batch of four met the same fate. Then Jalal Ding ordered all his soldiers to make a joint attack. Bhai Bota Singh and Garja Singh were surrounded by shouting swordsmen. The unequal fight could not last long. The brave Sikhs fell martyrs at last; but only after over a dozen Mughal soldiers had been dispatched by them to hell. Thus did they make their presence felt by the government of Zakriya Khan.

Thus did they demonstrate that they were not cowards, but bold and daring saint soldiers of Guru Gobind Singh; that they were not jackals, but lions. Thus did they show Zakriya Khan that his boast of having exterminated the Khalsa was altogether empty; that the Khalsa was very much in existence, and would continue to exist, in spite of all that he and his ilk might do.  This happened in the year 1739.