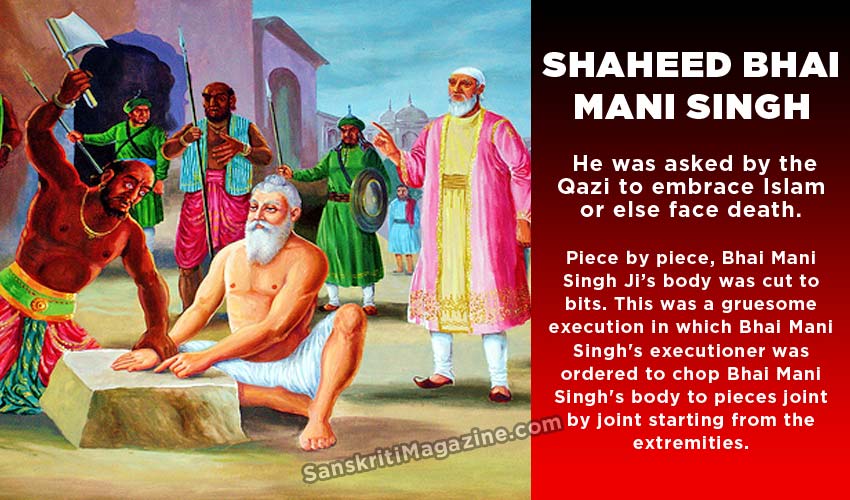 Shaheed Bhai Mani Singh Ji was a scholar, a Sikh and a great martyr. Bhai Mani Singh steered the destiny of Sikh religion at a very critical stage in the history. His great martyrdom has become a part of the daily Sikh Ardas (Jina singha singhaniya ne dharam het sees dittay, Bandh Bandh Katvaye…Think of and remember the unique service rendered by those brave Sikh men and women, who sacrificed their heads but did not surrender their Sikh Religion…)

The exact circumstances of Bhai Mani Singh’s birth are not known. Various historians have given different dates for his birth year including 1672, 1670, 1665 and 1662. He was given the name Mani Ram at birth and also called Mania in his youth. Based on records of a visit by Guru Teg Bahadar to Bhai Mani Singh’s home town, it seems most likely that he was born to Jatt parents of Dullat lineage prior to 1665 in the village of Kamboval near Sunam, of Punjab, in the district of Sangrur.

Mani Ram accompanied Guru Gobind Rai to Paonta for a period of about three years where he became involved in reading, writing and transcribing the writings of the tenth guru known as Dasam Granth. Mani Ram also copied various prayers and hymns from the holy scripts and texts compiled by Guru Arjun Dev for circulation among sangat.

After returning to Anandpur, Guru Gobind Rai held the first Amrit initiation ceremony in 1699. Bhai Mani Ram was among those initiated as a Khalsa warrior. All male initiates took the name of Singh, and thereafter they became known respectively as Guru Gobind Singh and Bhai Mani Singh.

Guru Gobind Singh sent Bhai Mani Singh to Harmandir Sahib in Amritsar as curator of the gurdwara known today as the Golden Temple complex. He worked there as a scribe making copies of scripture. Bhai Mani Singh returned to Anandpur at intervals.

Bhai Mani Singh was present during the December 1705 siege and evacuation of Anandpur, and accompanied the Guru Gobind Singh’s wives, Mata Sundari and Mata Sahib Kaur, to safety in Delhi.

In 1706 he rejoined the guru in Talwandi Sabo at Damdama Sahib where Guru Gobind Singh dictated the finalized scripture of what would become Guru Granth Sahib to Bhai Mani Singh.

He returned to Amritsar and resumed administration under the direction of Mata Sundari who corresponded from Delhi.

Following the Death of Guru Gobind Singh and establishment of Guru Granth Sahib, Bhai Mani Singh continued reporting to Mata Sundari. He embarked on preaching tours in 1714 and 1715, and used his influence to unify the panth after the martyrdom of Banda Singh Bahadar.

Because of political unrest and oppression of Sikhs by government officials, Abd-us Saman Khan and his son Zakariya Khan, Sikhs we unable to congregate peacefully for traditional festivities as Vaiskahi and Band Chhor held during Diwali. Bhai Mani Singh arranged for Sikhs to gather in Amritsar during Diwali to celebrate Bandi Chhor by agreeing to pay a Jizya tax of 5,000 rupees. He then discovered a treacherous plot hatched by the governor to send his henchman Lakhpat Rai with troupes to exterminate Sikhs as they assembled. Bhai Mani Singh sent out messages to the Sikhs, many of whom lived in desert and forest hideouts, to forgo festivities and avoid capture. Consequently though lives were saved, no tax was gathered. The governor held Bhai Mani Singh responsible for the non-payment of taxes in full.

Bhai Mani Singh was taken into custody and brought to trial in Lahore for defaulting on the promised tax. His captors gave him the opportunity to convert to Islam or otherwise face a death sentence. Bhai Mani Singh refused to give up his Sikh faith. His executors were given instructions to dismember his body.  When the executor started to cut into Bhai Mani Singh’s wrist, he insisted they dismember him properly beginning with the the first joint of his fore finger which had held the quill used to transcribe scriptures, and to sever his fingers, hands and limbs joint by joint.  He recited the Sukhmani Sahib paath while being dismembered.

Historians give two possible dates for Bhai Mani Singh’s martyrdom, which occurred either on June 24, 1734 or June 14, 1738 at Nakhaas Chowk.

In addition to his work on the final compilation of Guru Granth Sahib, Bhai Mani Singh is attributed as having transcribed and authored various literary works during his lifetime including:

Shaheed Bhai Mani Singh was one of the most devoted Sikhs of his times and a great martyr who never compromised anything for his faith.

~ With inputs from Sukhmandir Khalsa