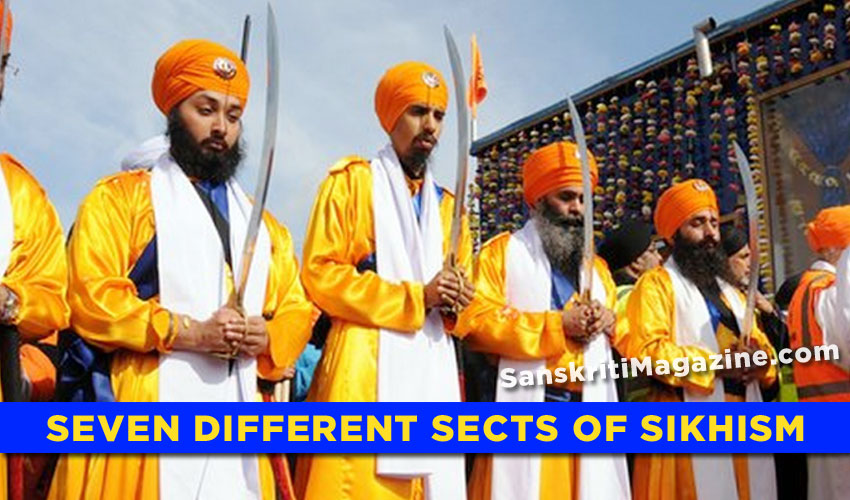 Guru Nanak traveled far and wide on mission tours around the world to spread his message of one creator and creation. The influence of the ten gurus may be found thriving among communities who over centuries split, and splintered, into schisms of mainstream Sikhism. Seven such sects are are considered to be offshoots of Sikhism because though their are differences in ideology, there are also striking similarities. Of these seven, several profess Sikhism, yet may not become initiated as Khalsa in the Amrit ceremony. Others do not necessarily profess to be Sikhs, nor accept Guru Granth Sahib as the ultimate, and everlasting in the lineage of Sikh gurus. However all offshoot sects of Sikhism respect Gurbani, and revere Sikh scriptures.

The Happy Healthy Holy Organization (3HO) was created by Yogi Bhajan, a Sikh of Sindhi origin who came to the United States in the late 1960’s, and began teaching Kundalini yoga. He incorporated basic Sikh values into his teachings, and as well as teaching yoga, encouraged students to revere Guru Granth Sahib, keep their hair, wear white, eat a vegetarian diet, live a moral life, and be initiated into Sikhism.

The Namdhari sect believes that rather than appointing Guru Granth Sahib his successor at the time of his death in 1708, that Tenth Guru Gobind Singh really lived to be 146 years of age, and nominated Balak Singh of Hazro to succeed him as guru in 1812. the Namdhari succession includes Ram Singh, Hari Singh, Partap Singh, and Jagjit Singh. Ram Singh who was born in 1816 exiled from India by the British in 1872 is commonly believed by Namdharis to still be alive, and is expected to return and take up his leadership role.

Namdharis revere both the Guru Granth, and Dasam Granth, and recite selections of their scriptures in daily prayers. They also believe in the three fundamentals principals of Sikhism as taught by First Guru Nanak. Namdhari means to “live beholding God’s name” and meditation is key to their belief system. They are animal activists, as well as strict vegetarians and drink only rain water, or water from a well, river, or lake.

Devout Namdharis keep their hair intact and maintain the articles of Sikh faith, wear a corded prayer mala with 108 knots. They have a distinct style dress including a white oval turbans, and kachhera, primarily white kurtas, but never wear black, or blue colors. They do not observe caste, and follow a code of conduct which forbids association with anyone aborting, or otherwise killing daughters, dowry exchange, or selling brides.

The Namdharis fly a white flag symbolizing Peace, Purity, Simplicity, Truth, and Unity, but respect the Sikh Nishan Sahib banner as symbolizing Sikhism. Areas of conflict with mainstream Sikhs include revering anyone one other than Guru Granth as guru, revering worship of cows, and fire ceremonies.

The Nirankari movement is based on the teachings of Baba Dyal who lived during the Reign of Maharaja Ranjit Singh and wrote against idolatry emphasizing Nirankar the formless aspect of the divine. The movement got is start with Gautam Singh in Rawalpindi of Punjab and has had several successors including, Darbar Singh, Sahib Rattaji, and Gurdit Singh. Their main focus has to do with the message of First Guru Nanak, without consideration to the legacy of initiation according to Tenth Guru Gobind Singh, or Guru Granth Sahib. Nirankaris recite as mantra Dhan Dhan Nirankar meaning “Blessed is the Glorious Formless One.” They prohibit use of alcohol, and tobacco. They neither bury, nor cremate, their dead, but consign bodily remains to flowing river water.

Twentieth century tensions ensued with mainstream Sikhs because of a public show of disrespect to Guru Granth Sahib by a leader of  Nikali (exiled) Nirankari defectors known as Sant Nirankaris. What began as a peaceful confrontation in1978 escalated in to an assault by more than five thousand armed exiled Sant Nirankaris on a few hundred unarmed Sikhs. The Nirankari clash resulted in the martyrdom of 13 Sikhs including their leader Bhai Fauja Singh.

The Nirmala Sect is thought to have originated in 1688 when Guru Gobind Singh sent Ganda Singh, Karam Singh, Sena Singh (also known as Saina Singh, or Sobha Singh), Ram Singh, and Vir Singh, disguised as sadhus from Paunta to Benaras to study Sanskrit. Following the evacuation of Anandpur in 1705, Sikh teachers, and preachers, were sent to Haridwar, Allahbad, and Varnasi to establish learning centers which still exist. Over the centuries the ideals of the tenth guru have been infiltrated by Vedic philosophy which figures highly in the sect of modern-day celibate Nirmalas, who differ from main stream Sikhism in that although they maintain uncut hair, and beards, do not consider it compulsory to receive initiation in the Amrit ceremony. The Nirmalas generally dress in saffron, or orange, colored traditional garments, and live a quiet, studious, contemplative monastic life.

Also known as Radha Swami, and Radha Satsang, Radha Soami is a spiritual movement with a membership of about 2 million that was founded by Shiv Dayal Singh Seth in 1869. The Radha Soami Sect do not call themselves Sikhs per se, yet honor Guru Granth Sahib as their scripture. They respect Sikhism, and have never claimed their line of succession to be a Sikh guru, nor have they attempted to alter the Sikh tenets. However Radha Soami followers are not initiated into Sikhism via the Amrit ceremony, but adhere to a vegetarian lifestyle, and abstain from intoxicants. The Radha Soami consider the human soul to be like Radha (consort of Krisna) in that the ultimate goal of life is to merge with the ultimate divine reality, or Soami.

The Sindhi Sikhs are an Urdu speaking people originally of Sindh a Provence of present day Pakistan. Though primarily Muslim, the Sindh people also also Hindu, Christan, Zoroastrian, and Sikh. The Sindhi people are great respecters of Guru Nanak, the founder of Sikhism, who traveled among them during his mission tours. The Sindhi regularly take part in in festivities commemorating the birth of First Guru Nanak. For centuries it has been a common tradition for the eldest son of a Sindh family to follow Sikhism. Though a Sindhi Sikh may keep Guru Granth Sahib installed in their home, and remain dedicated to the message of Guru Nanak, they do not necessarily take part in the Amrit initiation ceremony.

The Udasi Sect originated with Baba Siri Chand, the eldest son of Guru Nanak an aesthetic celibate yogi. The Udasi although district from mainstream Sikh householders, maintained close ties with the Gurus throughout the centuries. During the era that the Khalsa were persecuted by Mughals, and were forced into hiding, Udasi leaders acted as the caretakers of the gurdwaras until such time as Sikhs regained control.