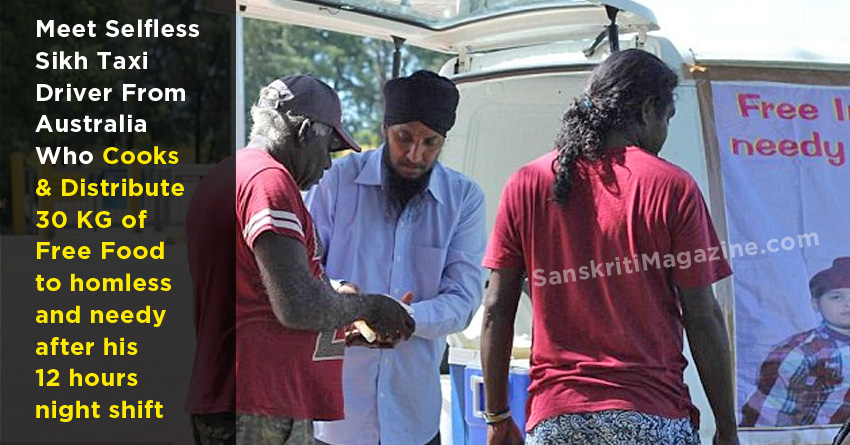 A Sikh migrant taxi driver who cooks up 30 kilograms of authentic Indian cuisine to feed the homeless after his 12 hour night shift is being hailed ‘Australian of The Day’.

For the past three years, Tejinder Pal Singh has dedicated the last Sunday of the month to feeding the poor and needy locals of northern Darwin, using what little money he can save.

Following a grueling twelve hour night shift, he slaves away in his kitchen for five hours to prepare a veritable feast of chickpeas, rice and vegetarian curry – which he then packs into huge containers and serves as a free lunch.

The father of two shrugs off compliments and simply says, ‘I do something for homeless people, so they get more energy so they’re happy‘, in an interview with Channel 9.

It’s hard to believe that a racist tirade of abuse from a cab fare in 2012 inspired the humble man to start up the service, in a hope to break down the negative prejudice associated with turbans in the area.

Mr Singh attributes a deep faith to his generosity, saying, ‘My religion says 10% of income goes toward needy and poor people – no matter (whether) they belong to your religion or any religion.’

The sacrificial nature has flowed through to his son, Navdeep, who described his father as a kind-hearted, helpful person, reported the ABC.

‘I help my dad pour cordial for people who are thirsty, they deserve a cold drink … it’s a really hot day’, Navdeep says, following his fathers footsteps.

And the thirsty and hungry come flocking when they see his van, decorated with the sign, ‘Free Indian food for hungry and needy people, Provide Sikh family.’

One indigenous man was over the moon with the hearty feast, proclaiming, ‘Here in Darwin – we eating Indian food. He help us, every people in Darwin.’

‘He love people, he loves Aboriginal people. He give them feed and love, like God,‘ he continued, thankful for the plate of food with no questions asked.

But Mr Singh has no interest in prying in the lives of those he serves. ‘I don’t ask any story, you know, I don’t want to interfere any life – my duty (is) only (to) give food to hungry people‘, he says.

Mr Singh’s advice for those inspired by his acts of service?: ‘I had no sleep, (it’s) really very hard. If you want to do something for society – you need to work hard.’