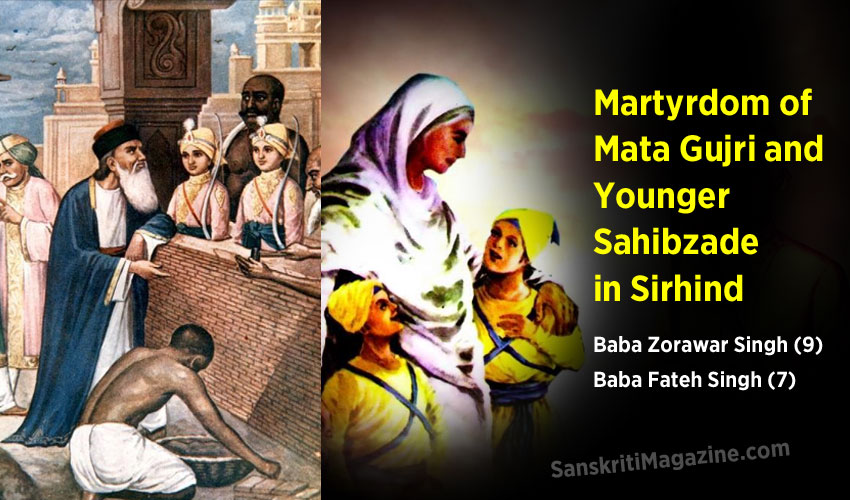 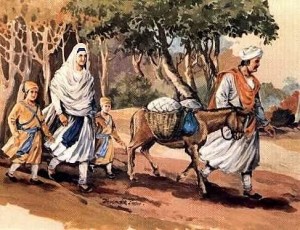 During the night flight from besieged Anandpur, 81 year old mother of Tenth GuruGobind Singh, Mata Gujri and her grandsons the two youngersahibzade, *Zarowar Singh (*Jujhar) age 9, and Fateh Singh age 7, struggled across the stormy floodwaters of River Sarsa together. The dark raging turbulence swept away people and possessions alike and many Sikhs did not survive the crossing. Mata Gujri and the young sahibzade became separated from the rest of their family. Wet, chilled, and exhausted they accepted help from Brahmin Gangu, a former cook servant who had been discharged from Guru Gobind Singh’s household. Gangu led them to his village Saheri not far from Morinda (present day district Ropar) and gave them shelter in his home. While she and her grandsons slept, Gangu pilfered her belongings looking for valuables. He found and took a bag of coins Mata Gujri had carried with her. He buried them and then when she discovered the theft, to cover his actions he fabricated a story about thieves heard prowling about. Not believing the story she confronted him asking him to return her money. Gangu became angry, protested his innocence and accused her of being ungrateful and then turned her out into the streets with her grandsons.

Hopeful for a reward, Gangu ran immediately to the local chaudhri official and told him that Guru Gobind Singh’s mother and her grandsons had just arrived at his home seeking shelter. He convinced the official that they would be rewarded by the Mughal authorities in Miranda for the capture of the Guru’s mother and together they informed officers Jani Khan and Mani Khan of Mata Gujri’s and the Guru’s sons whereabouts. On December 8, 1705 A.D., the officers captured and arrested Mata Gujri and the younger sahibzade and carried them to Sirhind. Still hoping for reward, Gangu accompanied them. 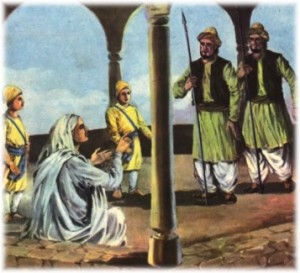 On December 9, 1705 A.D. Nawab Wazir Khan the head official of Sirhind imprisoned Mata Gurjri and the younger sahibzade. Despite the chilly winter weather, he locked the old women and her young grandsons in an open summer tower, or Thanda Burj meaning “cold tower” built to escape the searing heat of the summer months. Exposed to the elements with only the clothes they wore, the grandmother and her little grandsons had little protection from sun, wind or nighttime temperatures. Their cruel captors gave no food or drink to warm or sustain them. Curious local folk gathered to gawk at them. Sachanand Khatri, whose offer of his daughter as wife to one of Guru Gobind Singh’s elder sons had been repeatedly spurned, turned his anger towards the younger sahibzade vengefully declaring them to be the offspring of a poisonous serpent who would grow to be as dangerous as their father if allowed to live.

Wazir Khan ordered the sahibzade brought before him, but wished Mata Gujri to be kept confined in the tower, hoping that separation would increase their vulnerability to his ploys. The Ranghar, or governor, of Murinda went to fetch them, cunningly assuring Mata Gujri that he would return the children safely. She hid her grandsons behind her not wanting to let them go. The elder took the younger ones hand and bravely declared they should meet their enemy Wazir Khan. Once he had separated the Sahibzade from their grandmother, the Ranghar hoping to shake their resolve, told them their father and elder brothers had been killed. The sahibzade accused the Ranghir of lying insisting their father, the Guru, to be invincible. 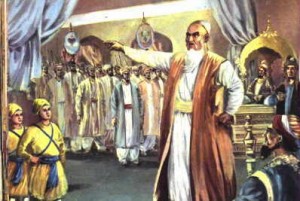 When the younger sahibzade stood before Wazir Khan, he told them their troubles would be over if they accepted Islam. He promised them riches and rank if they would denounce their father’s faith. He made it clear however, that they had no other choice, and should otherwise surely face death. The two innocent children faced their adversary courageously, vowing to remain steadfast in their faith. Advising them to consider carefully, the Wazir ordered them returned to the open air tower informing them their death sentence would be carried out in two days time if they did not repent. 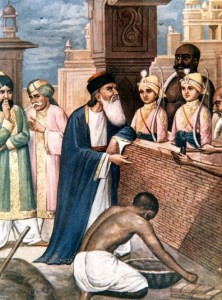 As the date of execution neared Mata Gurji comforted her grandsons, rallying their spirits with stories of their fathers heroic deeds. She reminded them of how their Grandfather Ninth Guru Teg Bahadar fearlessly faced his own martyrdom, and of their illustrious ancestor Fifth Guru Arjun Dev’s unfailing spirit when martyred.

On December 11, 1705 A.D. Wazir Khan offered the sahibzade a second opportunity to renounce their faith and embrace Islam. When they refused, he order that they be bricked up alive. Nawab Sher Muhammed of Malerkotl registered a formal protest insisting that the Quran did not condone the murder of innocents. Ignoring his advice the Wazir implemented his order. The sahibzade remained faithful as brick cemented upon brick rose about them forming a wall which rose chest high to suffocate them. As their air supply diminished, the wall gave way and collapsed.

On December 12, 1705 A.D. The Wazir gave the sahibizade one final opportunity to convert to Islam. The stalwart sons of Guru Gobind Singh withstood temptation, declared their undying devotion to the Khalsa Panth and denounced the Wazir’s forcible attempts to sway them. Determined to see them die, the Wazir, ordered the heads of the innocent 7 and 9 year old sahibzade to be severed from their bodies.

When Mata Gujri learned of her grandsons fate, she collapsed. Guru Gobind Singh’s mother could not be revived. Four days and nights of exposure to the elements in the open tower and the shock of hearing that her beloved grandsons had been cruelly beheaded proved fatal.

On December 13, 1705 A.D. merchant Seth Todar Mal of Sirhind obtained permission to perform last rites when he offered to cover the ground where the bodies lay outside the fort wall with gold coins. The merchant respectfully cremated the bodies of Guru Gobind Singh’s mother and young sons.

The place where the bodies of Mata Gujri and the sahibzade lay overnight is known as Bimangarh. Three shrines near Sirhind are dedicated to their memory :