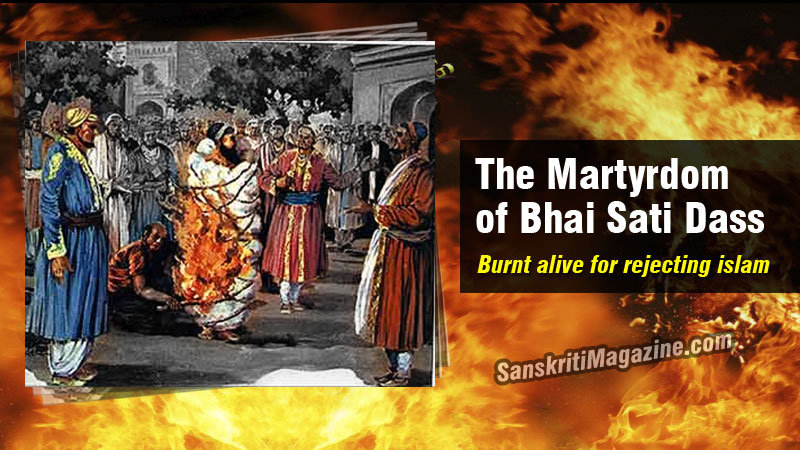 Bhai Sati Dass was the third and last of the three Sikhs who were arrested along with Sri Guru Teg Bahadur ji under the orders of Emperor Aurangzeb. Bhai Mati Dass and Bhai Dayala were done to death before the eyes of Bhai Sati Dass in the most brutal manner when they refused to forsake their religion and firmly spurned the offers of luxurious living in case they agreed to become Muslims.

The most commendable manner in which both his companions laid down their lives inspired Bhai Sati Dass to face the cruel Kazis, with courage, determination and fortitude.

In their effort to instill fear in the heart of Sri Guru Teg Bahadur Sahib, Bhai Sati Dass was brought out in the open at Chandni Chowk, with hands and legs bounded with iron shackles.

The spectators were guessing about the method to be employed for Sati Dass’s execution, when they watched in disbelief Bhai ji being wrapped in cotton.

Like his predecessors, he too was given the option of saving his life by agreeing to be converted to Islam or face death through torture. Bhai Sati Dass chose the later option, i.e. death through torture since he was not willing to shun his belief in Sikhism to the promised luxurious life in this world and heavens in the next.

Facing his master Sri Guru Teg Bahadur Sahib and while reciting Gurbani and meditating, Bhai Sati Dass who was wrapped in cotton, was set afire and burnt alive under the watchful eyes of his Guru and thousands of spectators. While many of spectators were sobbing, some Muslims were deriving pleasure out of these most barberous acts of execution employed by their co-religionist rulers.

Sri Guru Teg Bahadur Sahib, sitting in the cage showered his blessings on his three Sikhs who had faced brutal executions with unflinching faith and courage. He was immensely pleased with the steadfastness shown by these three Sikhs which was sure to inspire many more Sikhs to emulate the examples of these brave Sikh martyrs.

With the execution of Bhai Sati Dass, the Kazis of Emperor Aurangzeb were disheartened and dismayed. They were expecting that at least one among the three of Guru’s Sikhs would be attracted by lures of luxurious lives out of love for life and agreed to get converted to Islam.

Now they were left with no illusions that they could still persuade the 9th Guru of the Sikhs to adopt Islam, thereby opening the floodgate of conversion of the Hindus of India into Islam.

The disciples of Sikh Gurus will derive inspiration from these three sikh martyrs for all time to come and emulate their examples that no sacrifice is too high for one’s religion and faith.