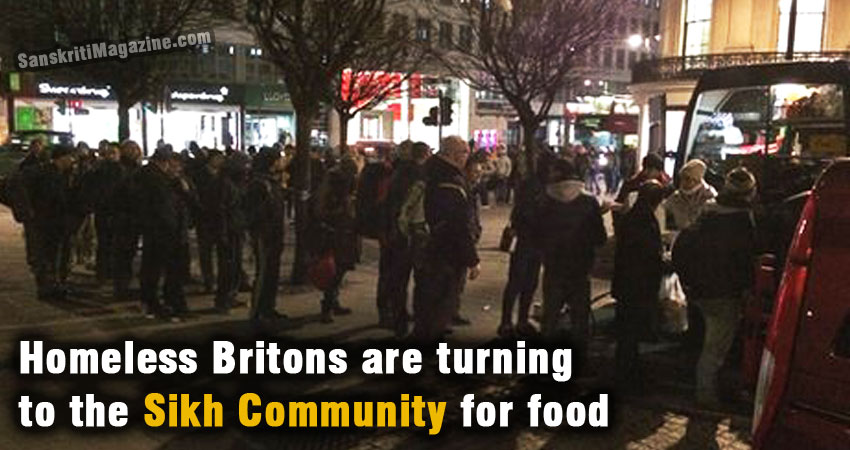 Homeless people in the UK are getting free meals thanks to a centuries-old Sikh tradition. Why, asks Rajeev Gupta.

“We come here because we get food… A hot meal. It’s a luxury for me.” John Davidson is 55 and homeless. He is one of 250 people who have just received a hand-out of hot soup, drinks, chocolate bars and other supplies from the Sikh Welfare and Awareness Team van parked up on the Strand in central London on a cold Sunday evening. The Swat team, as they’re known, park at the same spot every week so a group of volunteers from the Sikh community can hand out vital supplies. Homeless people, who overwhelmingly are not Sikh, patiently wait in line to be served.

For the volunteers handing out food here, this is more than just good charitable work. For them this is a religious duty enshrined by the founder of the Sikh religion, Guru Nanak, over 500 years ago. At a time of deep division by caste and religious infighting between Hindus and Muslims in India, Guru Nanak called for equality for all and set forward the concept of Langar – a kitchen where donated produce, prepared into wholesome vegetarian curry by volunteers, is freely served to the community on a daily basis.

Today, thousands of free Langar meals are served every day in Sikh temples throughout the UK. The Guru Singh Sabha Gurdwara in Southall, thought to be the biggest Sikh temple outside of India, says it alone serves 5,000 meals on weekdays and 10,000 meals on weekends. Every Sikh has the duty to carry out Seva, or selfless service, says Surinder Singh Purewal, a senior member of the temple management team. “It means we’re never short of donations or volunteers to help prepare the Langar.”

In recent times the Langar meal has acted as a barometer for the state of the economy. After the 2008 recession many Sikh temples reported a surge in the numbers of non-Sikhs coming in for the free Langar meals. It’s now common to see non-Sikhs inside the temple, Purewal says: “We don’t mind it. As long as people show respect, are not intoxicated and cover their heads in line with our traditions, then everyone is welcome.”

The Swat team say they decided to take the concept of Langar outside its traditional setting in temples and out onto the streets when they saw a growing homelessness problem in London. Randeep Singh who founded SWAT says: “When you go to the temple, what’s the message? The message is to help others, help your neighbours. That’s what we are doing.”