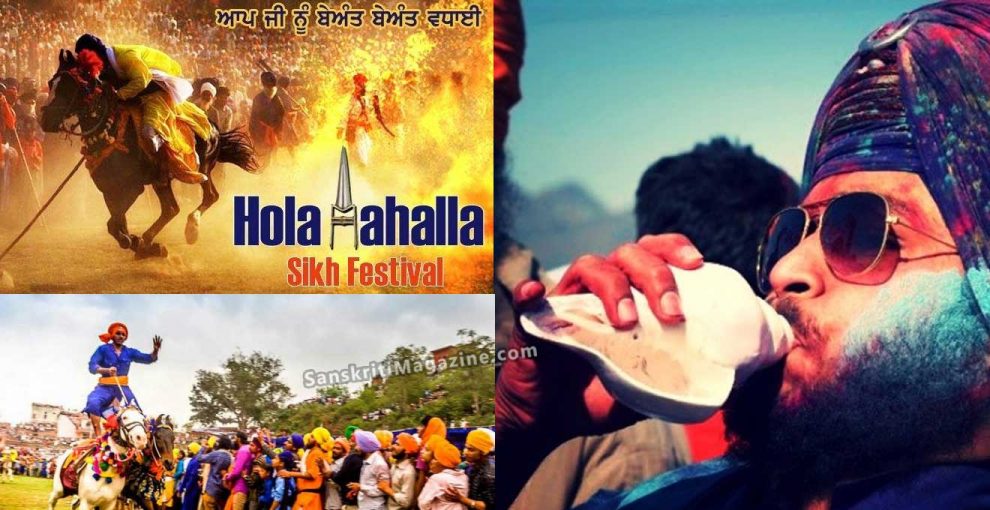 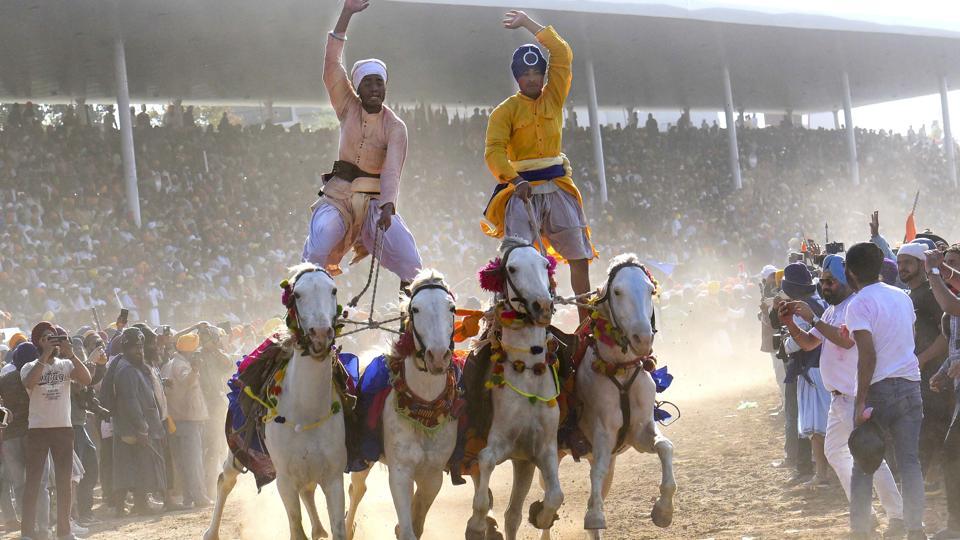 There are also a number of durbars where Sri Guru Granth Sahib is present and kirtan and religious lectures take place. Sporting shining swords, long spears, conical turbans, the Nihangs present a fierce picture as they gallop past on horseback spraying colors on people.On the last day a long procession, led by Panj Pyaras, starts from Takth Keshgarh Sahib, one of the five Sikh religious seats, and passes through various important gurdwaras like Qila Anandgarh, Lohgarh Sahib, Mata Jitoji and terminates at the Takth.

The Origins of Hola Mohalla

The parable of bhakt Prahlada and the demon king Hiranyakashipu finds mention in the Sikh holy scripture, the Guru Granth Sahib, where there is a description of how the lord (Hari) protects from all evil those who place their unwavering faith in him. Each chapter in the Guru Granth Sahib corresponds to a raga, which in turn has a direct relationship with particular human moods. The parable is part of a section that corresponds with the raga Asa, which seeks to instill a mood of hope, courage, inspiration, and determination in the listener. 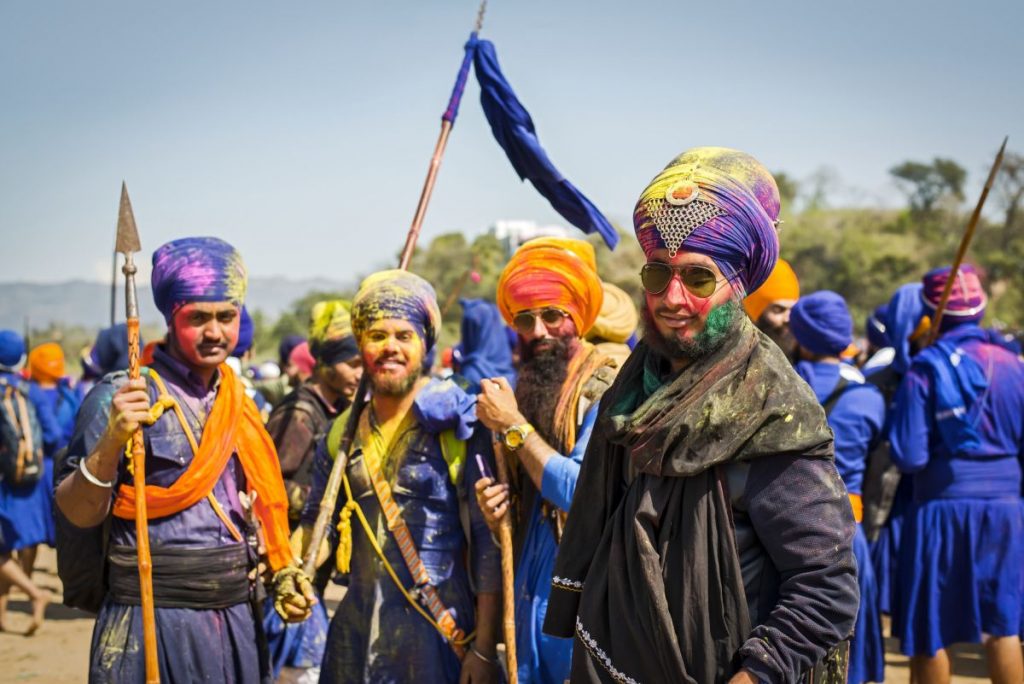 In 1701 CE, the tenth Sikh guru, Guru Gobind Singh, was camped at Anandpur Sahib in the Siwalik Hills, where he was leading a campaign against Aurangzeb and the chieftains of the surrounding hill kingdoms. The Guru felt that the ancient festival of Holi had lost its significance over centuries. The event, as described by the parable of bhakt Prahlada and the destruction of the evil king Hiranyakashipu, was meant to convey a message of unswerving faith, devotion, hope, and the ultimate victory of good over evil, even against all odds.

Envisioning a long struggle ahead for the Sikhs against persecution from the Mughals, and realising the need for them to be both strong in their faith as well as prepared physically for battle, the Guru decided on Holi as the occasion when all Sikhs would reaffirm their faith in the Khalsa tradition and prepare for the fight against evil. So, on the Holi of 1701 AD, the Guru personally organised and supervised a series of military drills and mock battles to the accompaniment of recitations of the holy scripture. From then on, Hola Mohalla became an integral part of the Sikh faith.

With the establishment of Sikh sovereignty over all of Punjab by late eighteenth century, Holi celebrations acquired a grandeur not seen for a long time in north India. The imperial capital, Lahore, would be immersed in preparations weeks before the festival, as Maharaja Ranjit Singh loved spending lavishly on the festivities. 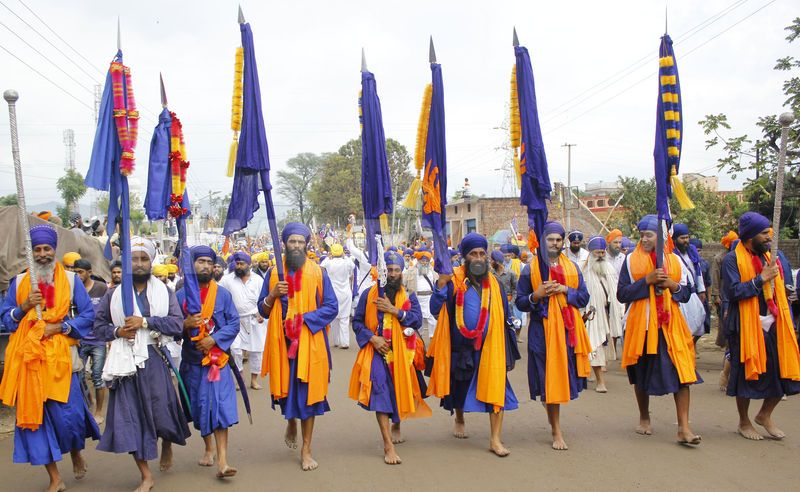 It was also not uncommon for foreign dignitaries to be in attendance at the celebrations. For instance, during the Hola Mohalla festivities of 1837 in Lahore, Sir Henry Fane, Commander-in-Chief of the British armies in India, was the guest of honour and he described how the spraying of lac dye (gulal) and rosewater created “such a red dust storm that the very face of the earth looked red”.

The Punjab at this time was the only Indian kingdom that had not been annexed by the British empire. Within a few years, the First Anglo-Sikh war would break out and the land of five rivers would be drowned in blood. But till then, the only red that Sir Henry Fane saw was the red of the colours of Hola Mohalla.

The Hola Mohalla festivities at Anandpur Sahib are marked by the recital of the Guru Granth Sahib (kirtan), as well as performances of folk and Sikh devotional music. The entire community partakes of simple meals at the community kitchen (langar). 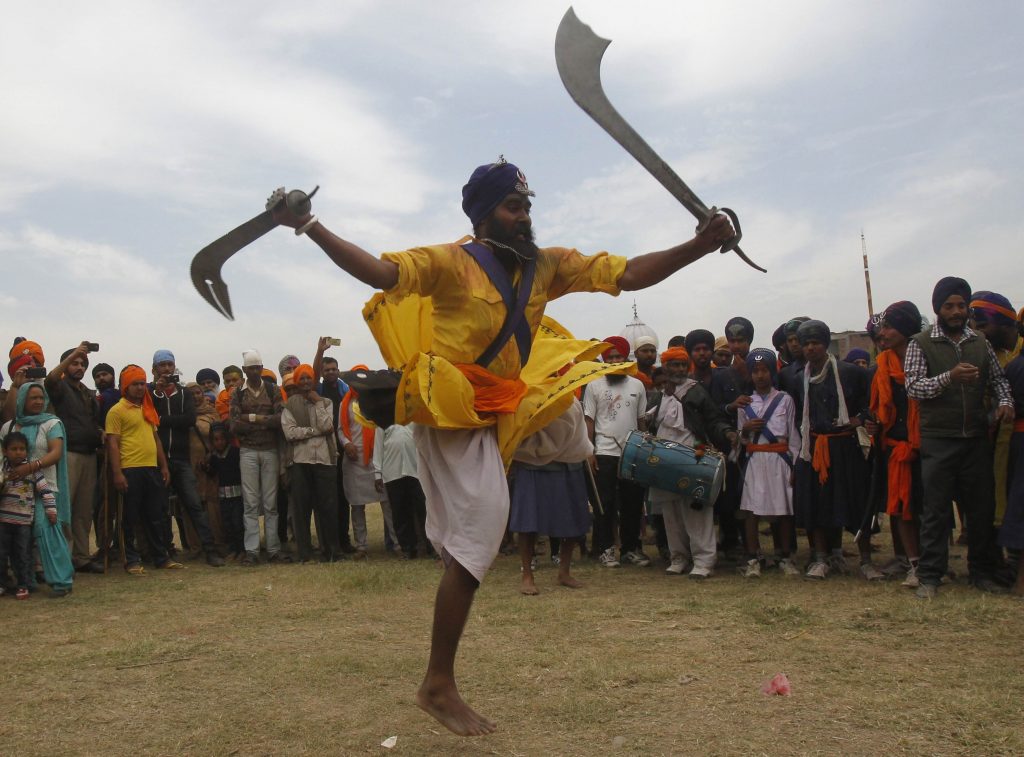 An essential part of the Hola Mohalla festivities is the traditional drink of the Nihangs – shardai or sukhnidhaan (the giver of bliss). Made from ground almonds, poppy seeds, black pepper, cardamom, cloves, cinnamon, rose petals, and a dash of the secret ingredient – cannabis or bhang, the drink was traditionally used by Nihang warriors to ease the pain from wounds suffered during battle. Although consumption of all sorts of intoxicants is forbidden within the Sikh faith, the Nihang Singhs on account of their special place within the community, enjoy this freedom.

Takht Sri Kesgarh Sahib is one of the “Panj Takht” or five holy seats (takhts) of Sikhism, the other four being the Akal Takht Sahib (Amritsar), Takht Sri Damdama Sahib in Talwandi Sabo (Bathinda), Takht Sri Patna Sahib (Patna), and Takht Sri Hazoor Sahib, Nanded (Maharashtra). Each takht is represented by a historical gurudwara and stands as a symbol of spiritual authority.

Celebrated with colours, water, and devotion, Hola Mohalla is a reaffirmation of all that which is noble in mankind – hope, courage, inspiration, determination, and, above all, faith.