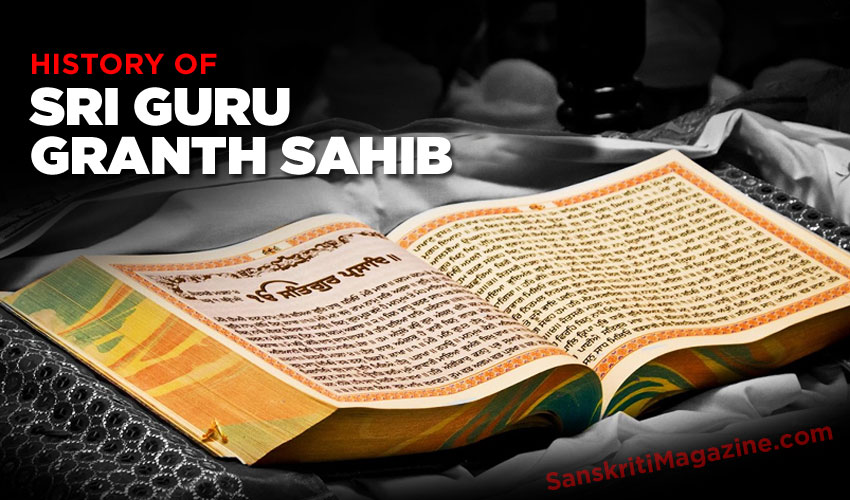 The Guru Granth Sahib contains the scriptures of the Sikhs. It is an anthology of prayers and hymns which contain the actual words and verses as uttered by the Sikh Gurus. Sikhs regard the Guru Granth Sahib as the living Guru. The Guru Granth Sahib, also known as the Adi Granth, consists of 1430 pages and has 5864 verses. Its contents are referred to as bani or gurbani. An individual hymn is a shabad. 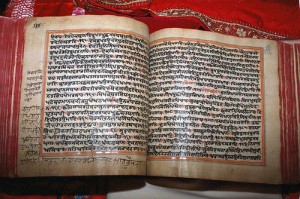 The Granth was compiled by the fifth Sikh guru, Guru Arjan Dev ji. He undertook the enormous task of collecting, compiling, and scrutinizing the hymns and compositions of Guru Nanak and his predecessors. He decided to include not only the hymns of the Gurus but also that of other saints. At the invitation of the Guru, followers of different sects, both Hindu and Muslim, came to the Guru and recited the hymns of their teachers. Guru Arjan chose only those hymns which echoed sentiments he wanted to inculcate in his own community. After the selections were made, the Guru dictated the hymns to Bhai Gurdas ji, who wrote the Granth Sahib.

Having compiled the Granth, the Guru placed it in the newly- built Harmandir Sahib (Golden Temple) in Amritsar. The first parkash (opening ceremony) was performed in the Golden Temple by Guru Arjan on August 30, 1604. The Guru nominated Bhai Buddha as the custodian of the Granth Sahib. At this time, the Guru bowed before the collection, acknowledging the higher authority of the bani to that personal importance and significance which he possessed as Guru. After this time, he no longer sat at a level above the Granth Sahib, but below it. The Guru also instituted daily public worship at the temple where the Granth was recited all day long to the accompaniment of stringed musical instruments (kirtan). 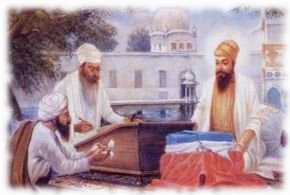 unauthenticated writings in the Granth and added four hymns in the beginning for evening prayers. Guru Gobind Singh also added several hymns from his father, Guru Tegh Bahadur. Otherwise, the Granth was left as it was before in the days of Guru Arjan.

Several copies of this Granth were transcribed by hand by Baba Deep Singh ji at Damdama Sahib. It is believed that four copies of the Granth Sahib were prepared; the first one was sent to the Harimandir Sahib at Amritsar, the second to Anandpur, the third to Patna and the fourth was kept by Guru Gobind Singh at Nander.

Guru Gobind Singh ended the line of living Sikh Gurus by raising the Adi Granth to the status of a permanent Guru. Guru Gobind Singh ji transmitted Guru Nanak’s divine light into the divine Word and declared that after him, the next Guru would be Guru Granth Sahib. He commanded the Sikhs that it was to be revered as the body and spirit of the ten Gurus:

Under orders of the Immortal Being, the Panth was created.
All Sikhs are enjoined to accept the Granth as their Guru.
Consider the Guru Granth as an embodiment of the Gurus.
Those who want to meet God, can find Him in its hymns.
The pure shall rule, and the impure will be no more,
Those separated will unite and all the devotees of the Guru shall be saved.   (Ardas)

When the Guruship was passed on, Guru Granth Sahib like the Gurus became the embodiment of Divine Light. It should, therefore, be remembered very clearly that bowing before Guru Granth Sahib as Sikhs, is not bowing before a book, but it is a bowing before the Divine Light or Jot (Guru) which was passed on when the Guruship was conferred upon it. Respect and veneration for Guru Granth does not imply idol worship, but rather respect for a divine message, the ideas and ideals contained in the Sikh scripture. It is the source or a means to the worship of God through His Word, and not an object of worship in itself. Both the Gurus and the Book deserve the respect which they are accorded because of the bani which they express, the word of divine truth. Bhai Gurdas ji states that “the picture of the Guru is the gurbani” (Bhai Gurdas, Var 24, pauri 11).

Revelation In The Guru Granth Sahib

Guru Granth Sahib is a remarkable storehouse of spiritual knowledge and teachings which does not preach any rites or rituals but stresses meditation on the Name of God; salvation can be obtained by means of regular, persistent and disciplined meditation. Most of the hymns are addressed to God and often describe the devotee’s condition: his aspirations and yearning, his agony in separation and his longing to be with the Lord. There are no mythological narratives, although God is described in anthropomorphic terms and the Gurus are not afraid to use the imagery of family relationships to describe the union of God and man. 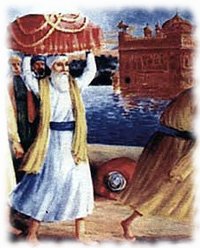 The subject of Guru Granth Sahib is truth: how to become a ‘person of truth’, that is, an ideal person or gurmukh. As Guru Nanak states in the Mool Mantar, God is the Ultimate Truth and one has to cultivate those qualities which are associated with Him. Through its teachings, the Granth can enable men and women to lead a purposeful and rewarding life while being members of a society. It seeks universal peace and the good of all mankind. There is not a word in the Guru Granth Sahib that might be derogatory to any other belief or religion. The Guru Granth Sahib also stresses the democratic way of life and equality of all people. It teaches that we are karam yogis, that is we reap what we sow. The emphasis is on moral actions, noble living and working for the welfare of all people.

One of the most distinctive features of the Guru Granth Sahib is that it is the first religious book which contains the writings of persons belonging to different communities, castes, and diverse regions of the country. It incorporates and sanctifies the writings of holy men of different faith. Therefore, the language of the Granth is a mixture of almost all the Aryan languages current in India, yet it is written exclusively in Gurmukhi script. Guru Arjan Dev ji, unlike many other religious leaders, did not believe that there is one particular sacred language in the sense that man can pray to God only in that language.

The Granth Sahib contains 937 hymns of 36 Hindu saints, Muslim sufis and bards. The hymns of the these holy men cover a period of six centuries (from the 12th to the 17th century). Regardless of the author, this gurbani has an equal status as the hymns of the Gurus.

There are also some hymns from Sikhs during the time of the Gurus, including those from Baba Mardana ji, Baba Sunder ji, Sata Doom, and Rai Balwand. In addition, the Granth Sahib includes some bani from eleven bards (bhats) who came to the court of Guru Arjan in 1580. They were men of wisdom and were much impressed by the personality and the work of the Guru. Their names are Kalashar, Jalap, Kirat, Bhikha, Sal, Mathura, Bal, Bhal, Nal, Gayand, and Harbans. Yet, overall, the majority of bani in the Guru Granth Sahib contains the hymns of the Gurus:

Jap Ji, also called Guru Mantar, was written by Guru Nanak. It occupies about 9 pages and consists of 40 sloks, called pauries of irregular length. The mode of composition implies the presence of a questionnaire and an answer. Jap Ji is followed by Sodar Rehras, another composition by Guru Nanak, although later on additions were made to it by Guru Ram Das and Guru Arjan Dev. Sodar is the yearning of the soul for the door of the house of God. Kirtan Sohila follows Sodar and occupies a little over one page. It was also composed by Guru Nanak but has additions by Guru Ram Das and Arjan Dev.

The next portion of the Granth is divided into thirty one sections each according to a particular raga. This portion occupies 1154 pages.

The Gurus considered divine worship through music the best means of attaining a state of bliss. Therefore, each of the hymns in the Guru Granth Sahib is noted with the melody and rhythm (raga) to which it is to be sung or read. There are 31 musical measures (ragas) in the Guru Granth Sahib. The selecting of ragas was carefully made by the Guru. Generally speaking, ragas are composed to suit various moods. Some are appropriate to the morning, others to the evening, some to joy, others to grief. Guru Arjan indicated that faith should produce a balanced outlook, tempering both happiness and sadness. Therefore, the Guru omitted those that aroused passions of any kind. Likewise, certain ragas were rejected for their melancholy.

The basic concept behind the hymns is that kirtan (sacred music), when sung or listened to with devotion and undivided attention, can link the individual’s consciousness with God. A mind may become stable and enjoy the peace of His divine presence, as listening to the hymns can exert a powerful influence on the mind and help to establish its communion with God.

Role of the Guru Granth Sahib in Sikh Life 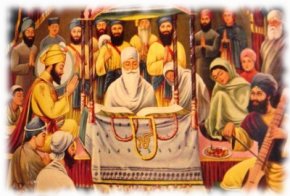 In all gurdwaras and many Sikh homes, the Granth is read every day. No Sikh ceremony is regarded as complete unless it is performed in the presence of the Guru Granth Sahib. On a daily basis, Sikhs receive a hukam or divine order in the form of a hymn from the Guru Granth Sahib, either in a Gurdwara or at home. The hukam is the first hymn of the holy book from the left hand page when it is opened at random. Similarly, at the end of a service, after the ardas, the Adi Granth is opened at random and a portion is read. Many Sikhs do this daily, regarding the verses as words from God which they will find helpful during the day. This is called vak lao, taking advice.

On special occasions, the Granth Sahib is recited non-stop from cover to cover by a string of readers. This continuous reading of the Guru Granth Sahib is known as an akhand path. It is regarded as the highest and the noblest ceremony in the Sikh religion, and can be performed on any important occasion. It requires nearly 48 hours to complete the continuous reading. According to Sikh history, the first akhand path was performed by Guru Hargobind, the sixth Guru, after the death of his wife, Mata Damodri ji. An akhand path was also performed by Baba Deep Singh ji when he pledged before God at Damdama Sahib to sacrifice his life for the protection of human rights.

Guru Granth Sahib ji remains as a permanent unchangeable guide for all Sikhs as a living Guru or Teacher. It is a representation of the undaunted strength of the Sikh community. Guru Arjan Dev preferred a martyr’s death to saving his life through making alterations in the hymns as required by Emperor Jahangir. Any Sikh can open the pages of the Guru Granth Sahib and find strength and guidance through His Word: “The Guru is now always with me” (Guru Arjan, Rag Asa)