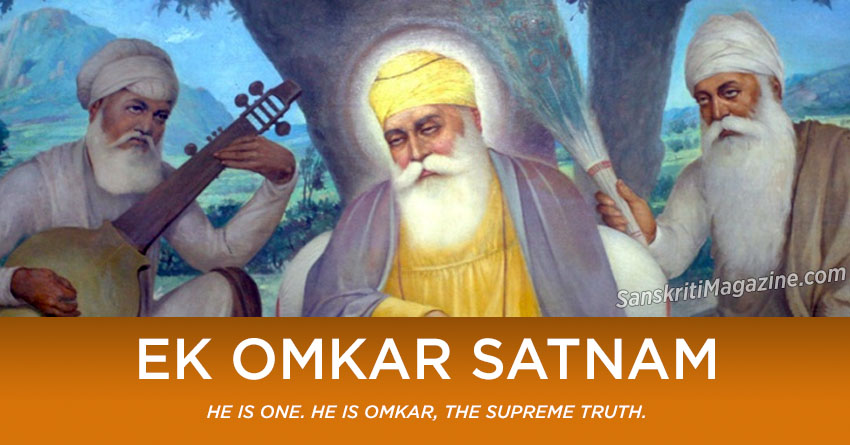 He is one. He is omkar, the supreme truth. He is the creator, beyond fear, beyond rancour. His is the timeless form. Never born, self-creating. He is attained by the guru’s grace 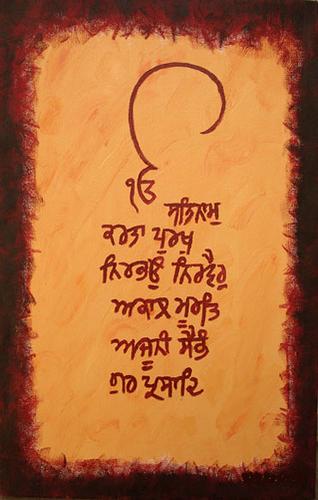 There is one reality, truth is only one: Ek Omkar Satnam. And, says Nanak, the name of this one is Omkar. All other names are given by man: Ram, Krishna, Allah. These are all symbols and all created by man.There is only one name that is not given by man and that is Omkar, and ‘Omkar’means the sound of Aum. Why Omkar? — because when words are lost and the mind becomes void, when the individual is immersed in the ocean, even then the strain of Omkar remains audible within him.

It is like a waterfall: you sit beside a waterfall and you hear its song but the sound is created by the water hitting against the rocks. Sit by a river and listen to its sound; it is caused by the river striking against the banks. We need to go deeper to understand things. Science tries to break down the whole of existence. What it first discovered was energy in the form of electricity, and then charged particles like the electron of which all of existence is made. Electricity is only a form of energy.

If we ask a scientist what sound is made of, he will say that it is nothing but waves of electricity, waves of energy. So energy is at the root of everything. The sages say the same thing; they are in agreement with the scientists except for a slight difference of language. Sages have come to know that all existence is created out of sound, and sound is only an expression of energy. Existence, sound, energy — all are one. The approach of science is to analyse and break things down, to reach the conclusion.

The sage’s approach is absolutely different: through synthesis they have discovered the indivisibility of the self. The wind rises creating a murmur in the branches of the tree, a collision of air against the leaves. When the musician plays a chord on an instrument, the sound is produced by a blow. All sound is produced by an impact, and an impact requires two — the strings of the instrument and the fingers of the musician. Two are necessary to form any sound. But God’s name is beyond all separateness. His name is the resonance that remains when all dualities have faded and cease to exist. Within this indivisible whole you come across this resonance.

When a person reaches the state of samadhi, Omkar resounds within him. He hears it resounding inside him and all around him; all creation seems to be vibrating with it. Nanak says: Omkar alone is God’s name. He refers to the name a great deal. Whenever Nanak speaks of His name — “His name is the path,” or “He who remembers his name attains” — he is referring to Omkar, because Omkar is the only name that is not given to Him by man, but is His very own. None of the names given by man can carry you very far.

If they do go some distance towards Him, it is only because of some slight shadow of Omkar within them. The word ‘sat’ needs to be understood. In Sanskrit, there are two words: ‘sat’ means beingness, existence, and ‘satya’ means truth, validity.

There is a great difference between the two, though both contain the same original root. When Nanak says: Ek Omkar Satnam, both ‘sat’and ‘satya’ are contained in his expression. The name of that supreme existence is as true as a mathematical formula and as real as any work of art; it is as beautiful as a dream and as correct as a scientific formula; it contains the emotions of the heart, and the knowledge and experience of the mind. Where the mind and the heart meet, religiousness begins.

If the mind overpowers the heart, science is born. If the heart overpowers the head, the realm of art is entered: poetry, music, song, painting, sculpture. But if head and heart are united, you enter into Omkar. Abridged from The True Name,

Holla Mohalla – A Colourful Festival Of Courage, Hope, And Faith For Sikhs
A 300-Year-Old Gurdwara In Pakistan Opens Its Doors For The First Time In Nearly 70 Years
Comment