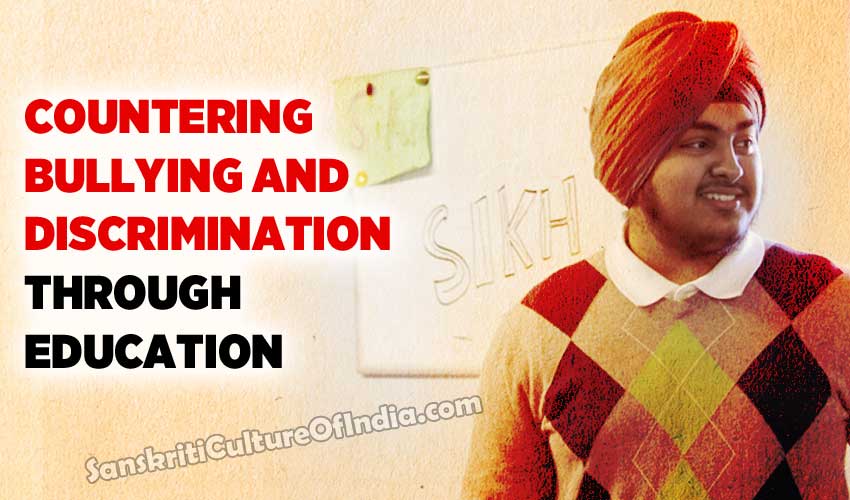 Throughout elementary, middle and high school, Prabhdeep Suri has been the only Sikh in his class, and it’s been obvious.

Like all Sikh boys, he wore a patka, a head covering for his uncut hair that’s worn out of respect for his gurus. To his classmates, the patka was a license to stare, taunt, isolate, punch and kick him. It was a target to knock off his head. It was the reason they called him “Osama bin Laden” and “terrorist.”

“He came home crying three days out of five,” his mother, Harpreet Suri remembered. “They were taking his patka off almost every day.”

Bullying is a hot topic in the U.S. today, and affects children and teenagers who for any number of reasons appear or act differently. But unlike others who can hide their religion at school — by wearing a baseball cap instead of a yarmulke, or never mentioning that their family celebrates Ramadan — Sikhs literally wear their religion on their sleeves.

The kara, a steel bracelet, symbolizes strength, and unity with God. Sikhs believe God created the universe and all religions, and made men and women equal. More apparent is the patka, which covers a Sikh boy’s head from the day his hair is long enough to tie into a topknot, and is traded for a turban at his coming-of-age ceremony, around age 12.

Prabhdeep, now 17, credits his parents and his religious community at a gurdwara (or temple) here for giving him the strength to survive the torment with his pride and religious identity intact. His parents sought to instill that pride with the help of religious school teachers at the gurdwara and counselors at a Sikh summer camp.

But they dealt with the verbal and physical assaults at school mostly on their own, holding countless meetings with often-disinterested principals. They enrolled Prabhdeep in a private school in the vain hope of a serious response. Once, at a school assembly, they wrapped their son’s hair in his patka as they explained the sanctity of the ritual.

“I was very resistant,” Pradhdeep said, recalling the public patka tying. But he said he understands the importance of demystifying Sikhism for non-Sikhs. “We stand up for ourselves,” he said, “by telling others about our religion.”

Increasingly, in recent years, Sikhs have banded together to call attention to the plight faced by their school-age children, so that families such as the Suris do not have to fend for themselves.

The Maryland-based Kaur Foundation, for example, has distributed sleek, upbeat anti-bullying videos and lesson plans to the teachers of 1.3 million American elementary and secondary school students since 2008. The video, “Cultural Safari,” explains Sikh culture, including a patka-tying demonstration and a lively musical number, but also makes the case for tolerance of anyone from an unfamiliar background.

“You don’t have to have Sikhs in the school to realize this is a valuable curriculum,” said Nina Lamba, the Kaur Foundation’s director of strategic partnerships and the owner of a technology company in northeastern Maryland.

But children are not the only victims of ignorance among the 500,000 Americans who practice Sikhism, the world’s fifth-largest religion. Incidents against Sikhs in recent years include:

Because of their turbans — of all American men who wear turbans, the vast majority are Sikhs — many mistake Sikhs for Muslims, who sometimes wear turbans, though not commonly in the U.S. Sikhs — properly pronounced “siks,” but more commonly “seeks” — are also mistaken for Hindus, because Hinduism dominates India, where Sikhism was founded and most of the world’s 25 million Sikhs live.

In response to the violence, said Amardeep Singh, co-founder of the largest Sikh civil rights group in the U.S., Sikhs have come together to explain who they are, not by contrasting themselves to Muslims, but by speaking up about their own beliefs and practices.

“One of the core tenets of Sikh tradition is to have respect for all religious traditions,” said Singh, whose Sikh Coalition was founded on the night of 9/11, after a man seeking vengeance attacked a Sikh family in Queens, N.Y.

“How can we throw Muslims under the bus,” he said, “when there are writings of Muslims in our own holy books?”

Singh and other American Sikh leaders have worked, especially since 9/11, to press the case of Sikh religious freedom before courts, federal agencies and Congress.

They successfully lobbied the Transportation Security Administration in 2007 to allow passengers to pass through airport security without removing their turbans. They helped convince the FBI in June to collect data on hate crimes committed against Sikhs. Before a congressional subcommittee this week, they testified against the “presumptive ban on Sikh articles of faith” in the U.S. military.

“It was 9/11 that put the issue out there for the Sikhs that, as Martin Luther King showed us, no one is going to fight your fight for civil rights,” said Mirin Phool, the Kaur Foundation’s founder and president. “You have to do it for yourself.”