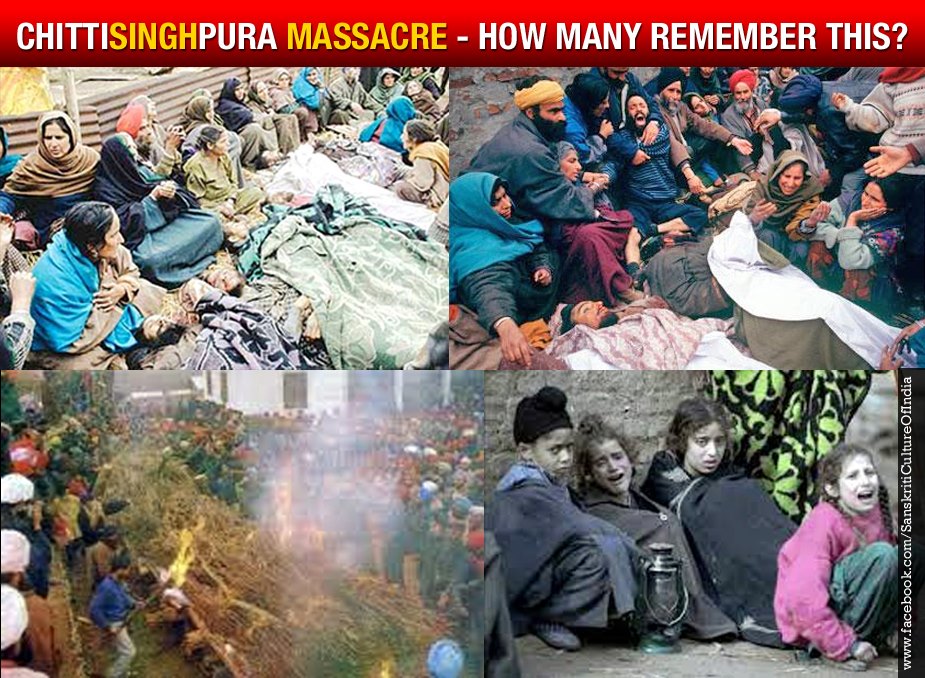 Remembering the forgotten souls of CHITTISINGHPURA MASSACRE, 18 years later still waiting for justice! The world knew who was behind this massacre but the soul of Chittisinghpura village still mourns its dead who have yet to receive justice for the senseless and gruesome bloodbath of Kashmir.

A few hours before the arrival of President Bill Clinton, the first visit in 22 years by any American president, India was shaken up by a massacre of 36 innocent Sikh men.

The massacre took place on March 20, 2000, in Chittisinghpura village in the Anantnag district of the State of Jammu and Kashmir in India. Dressed in Indian Army uniforms but speaking “Urdu”, the militants raided the two Gurdwaras where the Sikhs were celebrating Holi and Hola Mahalla Festival. Lining up the men, they opened fire that resulted in the deaths of all but one sole survivor, Nanak Singh, who was shot in the pelvis but survived by being buried underneath someone else’s body. His younger son, brother and three cousins lay dead beside him; the older son was away at the time.

After the massacre the Kashmiri Sikhs rallied against Pakistan, shouting anti Pakistan and anti Muslim slogans, demanding retaliation for the deaths from the Kashmir government. The villagers even gave description and identity of some of the killers but nothing was done to bring justice to the dead.

In an introduction to a book written by Madeleine Albright, President Bill Clinton erroneously accused the “Hindu Militants” of perpetrating the act, causing a major incident with both Hindu and Sikh groups who expressed outrage at the inaccuracy. Siding with Pakistan, the American government refused to accept Indian government’s accusation that it was the work of Pakistani Islamist group, the Lashkar-e-Taiba (LeT). However, the publishers of the book, Harper Collins, made a public statement, acknowledging the mistake of the words by President Bill Clinton and deleting the wordings in future re-printing.

A Pakistani militant by the name of Malik was later arrested in connection with the massacre and was interviewed by a New York Times correspondent. Malik noted he had no regrets in participating in the killings as he was trained to kill kafirs, “The Koran teaches us not to kill innocents. (But) if Laskar-e-Taiyba told us to kill those people (Sikhs), then it was right to do it. I have no regrets,” he added. Brainwashed to believe that Indian Army kills Muslims, burning their mosques and refusing to let them pray, Malik had taken part in two previous attacks. LeT refused to acknowledge Malik and the interview was swept aside as taken under duress. Malik will spend the rest of his life in an Indian prison but regrets he will not die a martyr.

David Headley, the LeT associate who was arrested in connection with the 2008 Mumbai attacks, confessed to the National Investigation Agency that the LeT carried out the Chittisinghpura massacre. He identified an LeT militant named Muzzamil as part of the group which carried out the killings apparently to create communal tension just before Clinton’s visit.

Wake up India, before it is too late
Seva – Selfless Service
Comment