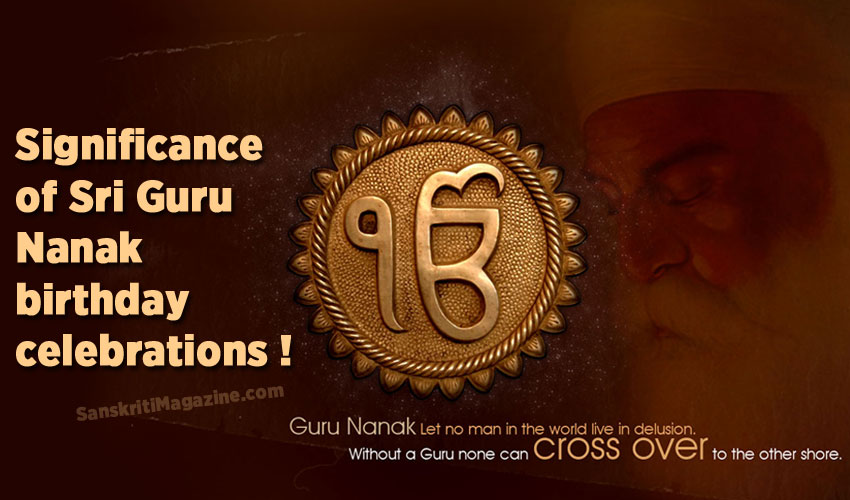 Sikh tradition celebrates the coming of Guru Nanak on this day, 545 years ago, as the descending of Divine Light on Earth to dispel the mist and fog of spiritual ignorance in an age of darkness (Kali Yug). Nanak’s appearance was to be the beginning of a new way (Panth) that was to crystalize into what we know as Sikhi or the Sikh religion.

Sikhs will celebrate Nanak’s birth, as they have always done, with much fanfare. As a symbolic gesture, their homes will be lit. Taking a cue from traditions that Nanak started, they will gather in congregations across the world and sing hymns of praise to God and share with others the fruit of their labors by organizing community kitchens.

Much of what we know about Nanak, the person, comes from traditional sources called Janam Sakhis (literally, birth stories), folklore and oral traditions. The picture of Nanak in the popular conscious is best captured in a ditty, sung even today and describes him thus, “Nanak is the King of Saints! A Guru to the Hindu and Pir to the Mussalman.” The image of a spiritual guide and teacher, universally revered by members of faiths that were otherwise antagonistic, is reinforced by accounts of the quarrel that broke out between Hindus and Muslims over his last rites, with each side claiming him to be one of their own. Two monuments honor his memory in Kartarpur (Pakistan) — one built by Hindus and the other erected by Muslims.

Nanak was born in 1469, in Talwandi, now Nankana Sahib in present day Pakistan, and died in 1539. The turning point in Nanak’s life came when he was around 30 and employed as a book keeper at the royal granary in Sultanpur. By his own account, recorded in Sikh scripture, he received the divine call, and was ushered into the holy presence, “The Lord called me, an unemployed minstrel, to His service. The Master called his minstrel and placed the Robe of Honor to sing true praises.”

Nanak’s experience of the Divine is captured in the creedal statement of the Sikh Scripture. It begins with the use of an alpha numeric, Ik Oankar to symbolize the One Ultimate Reality, which is both immanent and transcendent.

The use of an alpha numeric illustrates Nanak’s extensive use of conventional form — language, concepts, terms and poetic forms — from the tradition of his birth. But by investing them with new meaning and providing a new context, he transcends his inheritance.

By affixing a numeral “1,” to the traditional representation of the Hindu trinity, “Oankar,” he swept aside, in one stroke, the traditional conglomeration of Brahma, Vishnu and Shiva. Instead, Nanak pointed to the One, “Ik”, as alone being worthy of worship.

This One is both immanent and transcendent and is accessible — although ultimately unknowable — to one and all through Naam (literally, Name). Naam is the central doctrine in Nanak’s teachings, being “the only fixture in Guru Nanak’s house.” It comes wrapped in manifold layers of meaning, usage and nuance that cuts across linguistics, philosophy and mystical symbolism.

For our purposes, suffice to say that Naam represents both the creative essence of God as existence as well as the means and methodology for individual salvation.

“The medium is the message,” is a phrase Marshal McLuhan coined to express the idea that the medium embeds itself in the message. Nanak’s use of music and poetry as a medium to teach and share is a classic example: his commission was to sing true praises to an unknowable God, which suggests the use of a more redolent and rapturous medium than the usual didactic or moralizing discourse — precisely because Nanak’s experience of the Divine was as one that is beyond ordinary religious definition, Hindu or Muslim.

Not surprisingly, the Sikh Scripture that emerged in Sikh tradition — compiled by the fifth Nanak, Arjan and invested with the status of Guru by the 10th Nanak, Gobind — is a collection of sublime poetry arranged to music. It is 1430 pages long and a scripture of song and praise, because it the ecstasy and devotion of music that is the most appropriate vehicle to approach a God who is ultimately unknowable, a God who cannot be confined by religious boundaries but can be celebrated by hymns of praise.

For almost 30 years, Nanak travelled incessantly across India, to Tibet, and to Baghdad and Mecca. He met people of all religions in stations, in the village square, the street corner, the bazaar or somebody’s home, speaking to them in their language.

Whether it was at Hardwar, showing the pilgrims the futility of offering water to ancestors or at Mecca, asking the Qazi to point his legs where God was not, Nanak’s logic was irrefutable and his sincerity and unbounded love enough to melt any opposition.

These learning and transforming moments were brought about, not through dogma or debate or the angry waiving of Scripture, or in a formalized teacher-pupil setting.

Nanak changed the protagonists by interacting with them in informal daily settings, in the very ordinariness of life. He did not question their sincerity but simply caused them to question their own beliefs.

That was the genius of Nanak.

The fundamental truth of Nanak is conveyed in the opening verse of Sikh Scripture where he questions the prevailing modes of religious formalism and ritual, warning us that no ritual, undertaken for its own sake will bring fulfillment. All religious paraphernalia, is unavailing if not accompanied by an inner sense of submission and surrender to the Divine Will (Hukam).

We require, then, not so much an alternative set of praxis (practice), or exclusive focus on religious ritual, but a different paradigm or way of looking at life — one that requires an expansion of our consciousness that is guided by a sense of Holy in all human activity.

Our lives, then, must reflect the qualities of this timeless, eternal Being in whom we are anchored: we must be creative, fearless and without malice as we go about the business of our life.