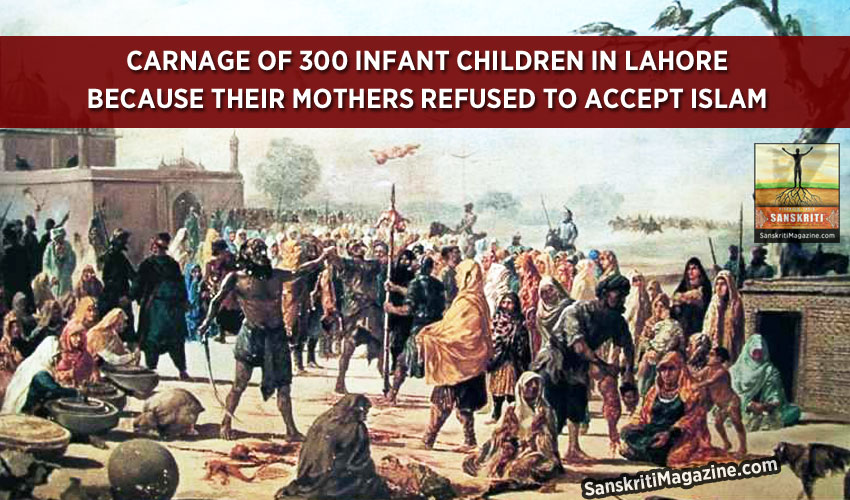 In 1752, Muslim governor captured Sikh women and gave them the option to convert to islam or have their infant children tortured and massacred. Their refusal to accept islam resulted in slaughter of over 300 infant Sikh children by chopping their limbs, impaling the babies on spears after throwing them in air, while still alive toddler’s inner organs were taken out & thrown around the mother’s necks as garlands. Still these brave women remained steadfast on their ideals and Sikh faith & not one accepted islam that day.

March 6, 1752 A.D., Muin-ul-Malk, Governor of Lahore (now Pakistan), also known as Mir Mannu; ordered the extermination of Sikhs in his area & had the men-folk beheaded publicly, with the younger unmarried girls sold or distributed among the jihadis. The women and children had a different fate and were taken captives & keep hungry in the Lahore jail.Starving women were forced to operate heavy wheat grindstones and were given the option of conversion to Islam or suffer consequences. They unanimously chose to remain steadfast to their faith in the face of certain death, upon which the Muslim guards gruesomely massacred over 300 infants and children, IMPALING them on spears. Chopping their limbs, bodies of babies were RIPPED open to take out Internal Organs which were then garlanded around their mothers necks. One by one many Sikh women suffered such brutal atrocities but they all chose to remain steadfast to their Sikh faith instead of embracing Islam.

Miraculously though, before the Womens’ turn came to be slaughtered, the surviving Sikh women were rescued by the Akalis (Sikh horsemen) sometime after the death of Mir Mannu on November 4, 1753. One can guess, that similar barbarity must have befallen on Sikh babies at other prisons where their mothers could not be rescued to tell their part of tragedy. 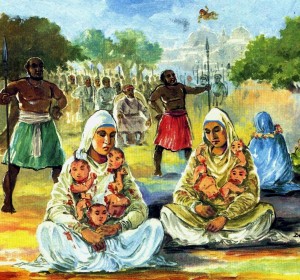 Incidents like these run in thousands if not more, and were spread over entire Punjab region, the evidence for many such gruesome atrocities come not from the survivors such as these women, but interestingly from the Muslim chroniclers themselves who very proudly mention these infidel slayings as a “service to Islam “. Such as one account by Nur Ahmad Chishti who recorded that Mir Mannu “killed thousands of Sikhs” daily. Once, on the day of Muslim festival, he beheaded 1100 Sikhs” in public.

Even today, 200 years later, Islamists are doing the same Islam barbarity upon the Yezidi women and children in Iraq, at the time of writing this article.

Could anything be more painful for Sikh women than to watch and witness the gruesome butchery of their own sons and husbands? These women maintained strong conviction in their Sikh faith in the face of extreme atrocites. In those days Sikhs were persecuted because they were considered infidels by Muslims & today Sikhs become victims in the United States because they are confused with Muslims. Its my hope that readers will share & help avoid such confusion

Some people may wonder why didn’t these women convert for a moment to save their children & themselves, be released & when free then go back to worshiping your old religion again? this way atleast they could save their & their babies life and go on worshipping your old religion like before once you have appeased the Muslims by fake-converting to Islam ?

The important thing here is that the Sikh resistance shown by these women was not a fight to worship in “Sikh way” rather than “Islamic way”, the reader should not mistakenly consider this heroic resistance of Sikh women as some blind intoxication with Sikhism so much so that they sacrificed their children but foolishly refused to abandon Sikhism. The Sikh women here were not being obstinate about “being a Sikh to the last moment of breath”. This sacrifice shown here is the highest epitome of fight for principles in Sikh history, for which life had to be given. This Sikh resistance here, was primarily to stop the spread of Islamic ideology in India at all costs; instilling a blind faith & a cult like commitment to die for Sikhism was NOT the objective here as it might seem to some. The Sikhs of that time understood very well the dangers of Islam & the hate it perpetuates towards humanity. If Islam was just another peaceful religion, then the Sikhs could just as well have converted to Islam if it was just a spiritual & peaceful religion like any other religion; meaning why die for Sikhism if all religions are same? The only way to stop the hateful ideology of Islam, was not to give in to forced Islamic conversion at all costs. Infact this was the only option available to them, today Islam has a very weak chance against the advent of internet and democracy in many powerful nations; but in those times many powerful civilizations were rapidly collapsing in the face of Islamic jihad. In India in one generation, either all infidels would be dead or would have converted to Islam.

Converting to Islam to save ones’ neck was already common place & the ‘logical thing’ to do during this time in the spread of Islamic rule in India. Many infidels in India who were forced to convert to Islam to save their necks, actually did indeed convert to Islam, and then went on to practice their old Hindu / Buddhist religion secretly inside their homes; but outwardly they put on a Islamic name, Islamic rituals/circumcision, Muslim beard just to save their necks. Over a few generations, they became more Islamic, more radicalized and started to feel a connection with pan-Islamic pride and anti-infidel mindset radicalized them and within a few generations, the descendants of once forced-converted-closet Hindus had turned into the same monster, their ancestors had tried to save themselves from. Today their descendants are called “Pakistani’s”, the world’s finest producer of ongoing terrorism and a nuclear contributor to Muhammads’ 1400 year old legacy of jihad. The ancestors of present day Muslims were all Closet-Hindus at one time. They practiced ancient Hindu festivals like Holi upto 2 or 3 generations even after converting to Islam.Even today some of Pakistani’s keep their old Hindu surnames.

This Sikh resistance as shown here, was the fight against Islamic ideology and its spread across human minds, and for this sacrifices such as that of these brave women had to be made, not because they were careless about their babies life, nor that they were intoxicated with Sikhism as is commonly seen in many blind cult faiths, but because one of the Principles of Sikhism is to put welfare of society above ones’ individual welfare. The purpose of a Sikhs’ life is not to be selfish about one’s survival but about the survival of “society” / “community” at large, this means the extent of harm done by self-sacrifice of these Sikh women is minor as compared to the damage to the society that would have been done if Islam is allowed to be spread in the Indian society. This can be seen today, old civilizations now turned Islamic.

Had these women converted to Islam they would have saved their lives and their babies, but it would have lead to perpetual spread of Islamic poison in society, as we can see with the emergence of Pakistan, which is far worse than personal death of these women & the immense grief of massacre of their babies. It was only after this immense sacrifice that the Sikhs less than 5% of Punjab, were able to rule over Punjab and tame the Muslim majority areas. No other episode in history has seen a slaughtered tribe taking the enemy head on in less than a generations time; and rendering North India free of Islam. In the grand scheme of life, the sacrifice of these women was necessary.

– On another note, humans are social animals. Its called Pack mentality… Muslims love it.

Once anybody converts, Muslims will shout out loud as when some celebrity converts to Islam, they mean to show that as an example that Islam is true. If these women had converted even for a moment, an example would have been set; and a lot more people would not have stood up to fight against islam. The idea was to show strong resistance at all costs to stand up against Islamic oppression & you you couldn’t put an end to Islam in India if these brave Sikh men & women just converted.

These brave women sacrificed their babies & set a great precedent at that time. Taking inspiration from these brave women & other Sikh martyrdom that followed many more people joined the Sikh resistance & did not accept forced conversions and fiercely fought against Islamic oppression. Within next 50 years, Sikhs who were less than 5% in Punjab, not only destroyed & took over the Islamic empire in Punjab, but also ruled over that region which was majority Muslim something unparalleled in history till date, it is to say that Sikhism on the verge of being extinction, did not run away to safer parts of the world, but stood right there steadfast and rather kicked the enemy out of Punjab. By 1800, Punjab with a sizeable Muslim population was ruled over by a Sikh emperor who tamed their jihadi tendencies, by closing several mosques that called for jihad, banned muslim calls to azaans in the streets of his capital and wrested half of Afghanistan east of Khybar pass. This put a stop to Islamic spread in India. Today there is no Islam in as much as half of Punjab (todays’ North India). Sikhs who numered less than 5% of a population could not have saved their future generations from Islam, but for the Bravery of these women. In the grand scheme of life, the sorrow & sacrifices faced by the Sikh women must have been small and necessary. Today we are in much better and safer position with the advent of internet to face Islamic jihad. But will we use our freedoms today to carry on the fight of these women? These women belong not just to Sikh faith but a beacon of inspiration for all of us freedom loving people.