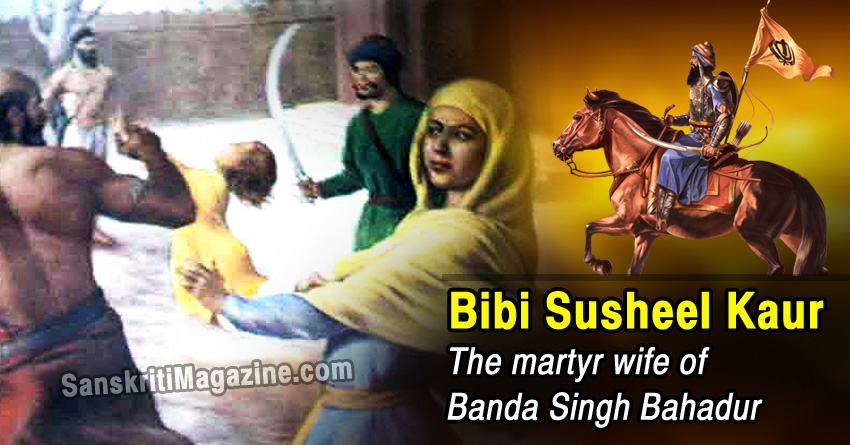 Very little is known about the great Sikh woman named Susheel Kaur. She was born in a royal family and was the princess of kingdom of Chamba. Her father Raja Udai Singh of Chamba brought her up like a princess but she experienced the most gruesome realities in her life. Her sacrifice is supreme. She showed the world how precious Sikhi is. Sikhi is more precious than our life, our possessions and our family.

Bibi Susheel Kaur was born to the royal family of Chamba kingdom that believed in the house of Sri Guru Nanak Dev Jee from two or three generations. This family was especially close to Siri Guru Tegh Bahadur Sahib Jee.

We all know that the kingdom of Kahloor played a very devious role in the Anandpur battles. The kings of this kingdom Bhim Chand and Ajmer Chand were instrumental in inciting the Mughals to evict Siri Guru Gobind Singh Jee from Siri Anandpur Sahib.

When Baba Banda Singh came in power, he attacked the kingdom of Kahloor to punish the king for his opposition to Guru Sahib. Eventually, Ajmer Chand, begged before Khalsa for mercy and Banda Singh let him go.

Around this time, King Udai Singh of Chamba asked Baba Banda Singh to accept the hand of his daughter. Baba Jee asked the Panj Pyaare to decide on this matter. After considering everything the Panj Pyaare gave their approval for the hand of King’s daughter for Baba Jee.

She was administered Khanday daa Amrit and named Bibi Susheel Kaur. In late 1710 or early 1711, she and Baba Banda Singh Bahadur were tied in a marital relationship through Anand Kaaraj.

Bibi Jee learned the martial art of Khalsa and soon became a skilled fighter. She participated in many battles, along with her husband. She used to lead in doing seva in langar. After marriage, Baba Jee stayed in the hill area for about 2.5 years. He constructed a 50 feet tall seat there and he (or other teachers) used to sit on that seat and train Singhs for war.  They did only two things in their stay in the hill area – fighting their mind with Naam and defending against the enemy attacks using arms.

Bibi Susheel Kaur Jee gave birth to a beautiful son – Ajay Singh who was born around 1712 or late 1711.

The last battle of Baba Jee was at Gurdas Nangal. Bibi Jee and her son were along with Baba Jee in this battle where they all became trapped in the fort of Gurdas Nangal. Abdul Samund Khan who was leading this battle had to face fierce resistance from the Singhs. Thousands of Singhs and Mughals gave their lives in this battle. After about 9 months of fighting, after all the supplies and rations had been exhausted, the Singhs were captured alive. Baba Jee, Bibi Susheel Kaur Jee and their son, Ajay Singh, were caught alive as well.

All the singhs were paraded to Delhi. Bibi Jee and her son were taken to the Harem of Farukhsiyaar, the Mughal emperor. In the Harem, Bibi Jee was tortured using new methods every day. After torturing and hurting her, they would try to cajole and coax her into becoming a Muslim and getting married to Farukhsiyaar or other Muslim person, but Bibi Susheel Kaur Jee who preferred death over becoming a Muslim, refused. Bibi Jee was mentally tortured by narrating tales of tortures they inflicted on the Singhs. For one week, they tortured 100 Singhs a day to martyrdom, killing 700 of them at the end.

When Bibi Jee refused to bow to their demands to adopt Islam and marry Farukhsiyaar (the Mughal Emperor), they snatched away her innocent 4 years old child – Ajay Singh. They took him to his father and right in front of him, they cut open his chest and took out his heart. Then they forced this heart in the mouth of Baba Banda Singh Jee Bahadur. Baba Jee did not cry or moan. He remained calm and focused in remembrance of his master – Siri Guru Gobind Singh Jee. Finally they hacked him to death and cut every part of his body before martyring him.

Bibi Susheel Kaur Jee with great patience listened to the news of her husband’s and son’s martyrdom. She stayed calm and still refused to bow before the Mughals. In the end, they threatened to rape her and force her into a degraded life of a prostitute. Bibi Jee was not armed and could not fight back. She knew that sooner or later, she would fall victim to the dirty eyes of the Mughals. She recognized their evil intentions and could not even imagine another man touching her sacred body. She felt that she had no option but to take her own life. She grabbed opportunity and took her life with a table knife. The Mughal dream of humiliating the Singhs by converting the wife of their leader Baba Banda Singh Jee Bahadur into Islam got crushed. Bibi Jee defeated their intentions by sacrificing herself.