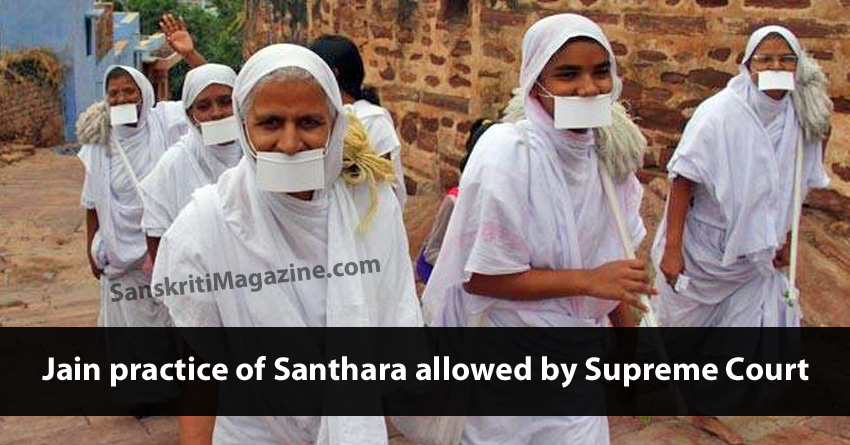 The Supreme Court on Monday took less than 60 seconds to stay a 20-day-old Rajasthan high court judgment which branded Jainism’s centuries-old ‘Santhara or Sallekhana’ custom as attempt to suicide warranting prosecution under Section 306 of the Indian Penal Code.

Members of Jain community had filed a couple of petitions challenging the August 10 HC ruling and lined up a bevy of senior advocates – A M Singhvi, Harish Salve and Gopal Subramaniam – to advance arguments to convince the SC that the constitutionally guaranteed right to profess a religion of one’s choice included practicing its tenets, traditions and customs.

The army of legal experts did not have to fire at all. The moment the petitions were called for hearing, a bench of Chief Justice H L Dattu and Justice Amitava Roy dictated the order staying the HC judgment and issued notice to the petitioners, on whose plea the HC had banned Santhara.

Importantly, the court after staying the HC order admitted the appeals. Given the long queue of appeals pending for disposal in the SC, these appeals are unlikely to be taken up for adjudication in the next five years. The SC is hearing appeals of 2009 at present.

This means the Jain community is free to practice Santhara. The Rajasthan government through additional solicitor general P S Narasimha said the state welcomed the SC’s decision to stay the HC judgment on Santhara.

The Vasundhara Raje government’s ‘welcome’ to the SC’s interim order drew a snide remark from Singhvi. He said the state government decided to keep mum on the issue and did not file an appeal. “The state government believes in watching silently and does nothing. Now it is welcoming the Supreme Court’s order,” Singhvi said.

The HC had ruled that “Santhara or fast unto death is not an essential tenet of Jainism”. It had said Santhara could not be termed humane as it was in breach of basic human rights.

A PIL filed in the HC by advocate Nikhil Soni in 2006 had challenged the legality of Santhara. The petitioner’s lawyer had said Santhara, which is fast unto death by giving up food and water, violated the most precious right to life.

The HC judgment was challenged before the SC. One of the grounds was that no illegality or criminality was associated with Santhara as it was “simply a Jain way of mastering the art of dying as much as the act of living”. The petitioners challenged the HC ruling saying it did not understand the concept and ethos behind Santhara.

“The animated object of existence is neither speedy death nor desire to enhance life span. Preconditions to Santhara are unavoidable calamity, terminal illness, great natural disaster or imminent death in old age. A Jain may then embark on the ultimate renunciation of his life by preparing for a cheerful, stoic and positive outlook on death after having sought all forgiveness and made every attempt to divorce himself from every possible attachment of life in order to ensure permanent escape from the eternal and unending life-cycle of Karma,” the petitioners said.