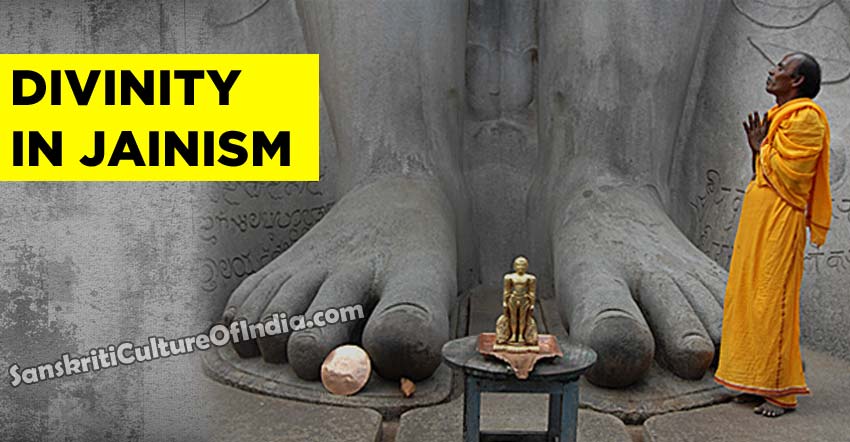 Jains do not believe in a God or gods in the way that many other religions do, but they do believe in divine (or at least perfect) beings who are worthy of devotion.

This makes it difficult to give a straight answer to the question “is Jainism atheistic?” The scholar Heinrich Zimmer suggested that a new word was needed: transtheistic, meaning “inaccessible by arguments as to whether or not a God exists”.

God and the problem of evil

The Jain view of God enables Jainism to explain the evil and suffering that exists in the world without the intellectual difficulties faced by religions that have an omnipotent, wholly good, creator God at their heart.

Where religions such as Christianity find the problem of evil one of their toughest tests, Jains use the existence of evil as a reason for denying the existence of an omnipotent, wholly good, Creator.

Jainism and God – the theistic side

Some writers regard the jinas as ‘gods’ because the jinas are venerated by Jains in the way that other faiths worship gods or God.

Jains venerate them because they have achieved perfection, and have become liberated from the cycle of birth and death.

The jinas are the ideal state of an individual soul’s existence, and are worshipped as a perfect example for Jains to aspire to. So the only ‘gods’ that exist for Jains are pure souls that are omniscient, perfectly happy and eternal.

In many ways the Jain attitude to perfect beings is both intelligible and satisfying, and sufficient to demolish the claim that Jainism is an atheistic religion. If one wants to argue that Jainism is atheistic then one must do so from a specific, limited, idea of what it means to be divine.

Jain prayers aren’t like the God-focussed prayers found in Christianity. Instead Jain prayers tend to recall the great qualities of the tirthankaras and remind the individual of various teachings.

Jainism and God – the atheistic side

Jains do not believe that the universe was created by God or by any other creative spirit. Jain writings are scornful of the very idea:

– If God created the world, where was he before creation? If you say he was transcendent then, and needed no support, where is he now?

– No single being had the skill to make this world — For how can an immaterial god create that which is material?

– If God is ever perfect and complete, how could the will to create have arisen in him? If, on the other hand, he is not perfect, he could no more create the universe than a potter could.

There is no God to maintain the universe

There is no God of judgement

Jains do not believe in that sort of judgement. Jains believe that the goodness or quality of a being’s life are determined by karma.

Jains believe that karma is a physical process, and nothing to do with spiritual beings.

There is no God the ruler

Jains do not believe that there is a god who must be obeyed.

There is no God who helps people

Jains do not believe in any god who will respond to prayer or intervene in the world. The beings that Jains worship have no interest in human beings.

The beings that Jains worship are beyond human contact and they cannot intervene in the world.

There is no God who demands worship

The perfect beings that Jains worship have no interest in human beings.

Any being that desired anything would not be perfect and thus not a god.

Every soul has the potential to become perfect. All perfect souls are equal.

The heavenly beings are not gods

The beings that live in the heavenly kingdoms are not gods since they are still subject to karma and reincarnation. These beings are called devas.