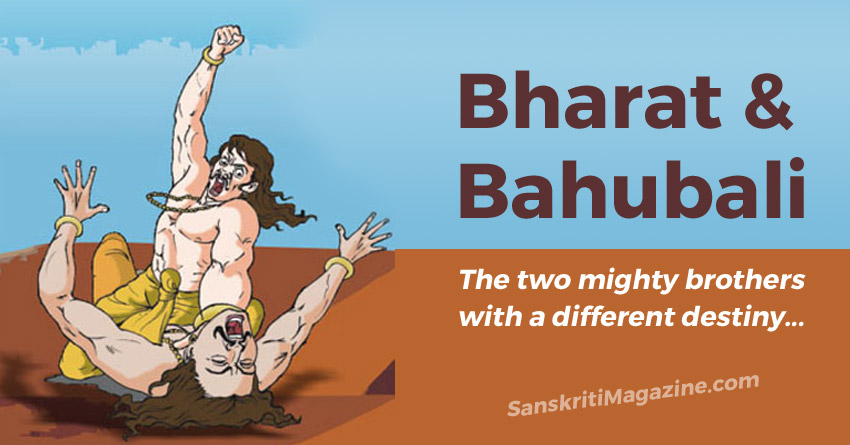 All of them were given proper training in different arts and crafts appropriate to them. Bharat turned out to be a great warrior and a politician. Bahubali was tall, well built, and strong. He is known for his mighty arm. In Sanskrit language, Bahu means arm and Bali means mighty. Because he had very strong arm, he is known as Bahubali. Brahmi attained very high literary proficiency. She developed the scriptures, which came to be known as Brahmi scriptures. Sundari became very proficient in mathematics. After Lord Rushabhdev attained omniscience, both girls renounced the worldly life and became his pupils.

As a king, Rushabhdev had responsibility for a large geographical area in his kingdom. At the time of his renouncement, he handed over Vinita, also known as Ayodhya, to Bharat and Taxshila to Bahubali. To the remaining 98 sons he gave different parts of his vast kingdom.

Bharat quickly established a firm hold over Vinita. He was an ambitious ruler and intended to become emperor of entire India. For this purpose he organized a strong army and started developing different types of fighting equipment. His army developed a miraculous wheel called Chakraratna (Chakra means wheel and Ratna means precious jewel) that would not miss its target. Then he embarked upon his journey of conquest. In those days there was hardly anyone who could withstand his well-equipped army. He could therefore easily conquer the regions round about Vinita. Then he turned attention towards his brothers and asked them to acknowledge his superiority. His 98 brothers saw the futility of fighting with the elder brother so they surrendered their territories to him and became disciples of Lord Rushabhdev.

Now only Bahubali remained. He was of different thought. He was conscious of his right to rule over the kingdom handed over by his father. Moreover, he was too proud to surrender and had the will and capacity to fight any invaders. Therefore when he received Bharat’s request to accept a subordinate status, he refused to accept that type of status and began preparations to fight. Both the brothers were strong and the war between the two was sure to result in large scale bloodshed. The counselors on both sides therefore tried to dissuade their masters from resorting to war but neither of them would give up his ground. The war thus seemed inevitable and both the brothers brought their armies face to face with each other. Every one shuddered at the prospect of the heavy casualty that was going to result by the imminent war.

At last, the counselors explained to their masters that the point at issue pertained to determination of the superiority between the two. Instead of undertaking the large-scale war for that purpose, they may better resort to a duel that would avert unnecessary bloodshed. Since both the brothers were agreeable, they suggested that they may engage in a straight duel and whoever was found superior would be proclaimed as the victor. Bharat and Bahubali both agreed. Accordingly, the duel took place in which Bharat tried to beat Bahubali by using different types of equipment at his command. He however was not successful in beating his brother. How could he bear his defeat, knowing that he intended to conquer all of India? He became desperate and ignored the rules that were agreed to for the duel, as he hurled his miracle wheel at Bahubali. But the wheel was not meant to hurt the persons of the same blood. It therefore came back without hurting Bahubali.

Bahubali became mad by Bharat’s violation of the rules of the duel. He therefore thought of smashing the elder brother with his mighty fist. As he raised his hand for that purpose, the onlookers trembled with the idea of Bharat’s imminent end.

But all of a sudden, Bahubali thought, ‘What am I doing? Am I going to kill my elder brother for the sake of worldly possessions that my revered father has willingly abdicated and which my other brothers have forsaken?’ He shuddered at the prospect of the imminent death of Bharat. Within a moment, he changed his mind. He saw the evil in killing his brother, whom he used to respect. As proud as he was, how could he ever turn back his raised hand? He therefore used it for pulling out his hair (as the monks do during Diksha) as a symbol of giving up everything and of renouncing the worldly life.

Bahubali then thought that if he went to the assembly of his father at that time, he would be required to bow to his 98 younger brothers who had renounced earlier and would as such be considered senior to him. How would his ego let him do that? He therefore decided to seek the enlightenment on his own and started meditating on the very spot where he stood. He stayed so focused on his meditation that he did not even remember how long he continued it. He remained so immersed that even creepers began to grow on the support of his feet. In memory of this event, a gigantic 57 foot statue of Bahubali stands erected on the hill of Vindhyagiri at Shravanbelgola, near Bangalore. It has been made out of a single granite rock and was erected about 1000 years ago. Pilgrims and visitors marvel that the statue under the open sky stands spotless even today.

One year passed in that posture of meditation. Bahubali however did not gain enlightenment. How could he gain it, since he did not get rid of the ego that was overpowering him? At last, Lord Rushabhdev, out of compassion, sent Brahmi and Sundari to bring him to the right path. They came to the place where Bahubali was meditating. Seeing the mighty brother standing like a rock, they calmly asked him to get off the elephant. As their familiar voice reached the ears of Bahubali, he opened his eyes in all amazement and looked around. But where was the elephant? He then realized that he was all the time riding the elephant of ego. He immediately overcame it and decided to go to the Lord.

During his long penance, he had overcome all other defiling instincts and only the ego had remained between him and the enlightenment. Now ego was gone and humbleness prevailed in its place. Therefore as he took the first step towards the Lord, he achieved full enlightenment and became omniscient.

His life span had almost reached its end and therefore he soon attained the ultimate liberation. As such, he is the first person to gain liberation during the present Avasarpini or the descending half of the current time cycle.

Meanwhile, Bharat had become the undisputed emperor or Chakravarti of entire India, which from his name came to be known as Bharatvarsha. He was the first Chakravarti of the current Avasarpini. He ruled equitably and in the interest of all. People were happy during his regime. He himself was happy in every respect. After ruling as such for a very long time, the ring came off of his finger while he was in his dressing room one day. He noticed that the finger looked rather odd without the ring. By way of curiosity he took all of the other rings off and saw that all the fingers looked odd. Then he took off his crown and other ornaments that used to decorate his ears, neck, arms etc and looked in the mirror. He noticed that he did not look as impressive as he used to look.

This set in motion a train of thoughts within himself. ‘I consider myself as handsome and impressive, but all that impressiveness merely arises from the ornaments etc. that do not belong to the body. The body itself is made up of blood, bones etc. which happens to be despicable but look attractive only on account of the skin in which they are wrapped. Then, how come I am so enamored of it? Moreover, the body does not stay forever and is going to decompose sooner or later. At that stage I will have to leave everything.’ He thus realized that nothing in the world inclusive of his body really belonged to him. In that case he thought, ‘Why not do away with my attachment of all the temporary things and instead focus on something that lasts forever like my father?’

Thus, he developed acute detachment for the worldly life. This led to the rise of true enlightenment from within and as a result he attained omniscience in that very room.

The focus of this great story is on ego and self-realization. Ego and pride builds negative karma and leads one to destructive behavior as symbolized in the story. Ego also causes anger and leads one to irrational behavior. Ego and superficial pride must be overcome on the path to enlightenment and omniscience. A learned person or a Sadhu should be respected regardless of his age. We should all strive for cultivating humility, a fundamental principles of Jainism.