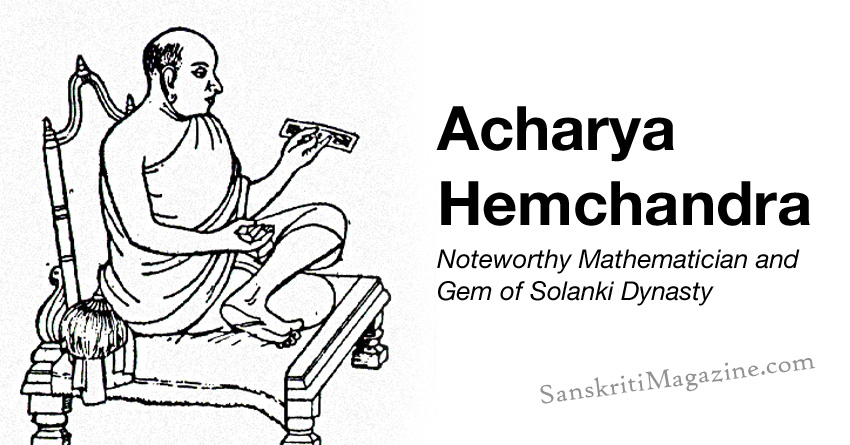 Hemchandra‘s mother was named Pahini and his father Chachadev. The name Hemchandra was one he took later in life and he was named Candradeva after he was born. The city of Dhandhuka where he was born is about 50 km south west of Ahmadabad the capital of Gujarat. Candradeva, when still young, was taken to a Jain temple where he became a monk and changed his name to Somacandra. He was instructed in religion, Indian philosophy, the sacred scriptures, logic and grammar. When Candradeva was ordained in 1110 into the Shvetambara (White-robed) sect of Jainism and he was given the name Acharya Hemchandra.

Gujarat at this time was ruled by the Solanki dynasty. Gujarat expanded to its largest extent under this dynasty and learning flourished, particularly in the economic and cultural fields. King Siddharaja made excellent use of Hemchandra’s great skills, knowledge and learning in ruling Gujarat. King Kumarapala succeeded King Siddharaja and from 1125 he was advised by Hemchandra. Of course as a spiritual leader, Hemchandra was in a strong position to see that his ideas were put into practice and indeed this led to Gujarat becoming considerable more advanced in culture and learning. Hemchandra was a strong believer in non-violence and Gujarat flourished in peace for many years. He convinced King Kumarapala to bring in laws which not only prohibited violence between people, but also made it illegal to kill animals. Hemchandra convinced the King to make the Jain religion the official religion of Gujarat.

Hemchandra was an eloquent religious teacher, skillful political adviser, and a scholar of the highest standing:-

A prodigious writer, [Hemchandra] produced Sanskrit and Prakrit grammars, textbooks on science and practically every branch of Indian philosophy, and several poems, including the Trishashtishalakapurusha-carita (Deeds of the 63 Illustrious Men), a Sanskrit epic of the history of the world as understood by Jain teachers. He was also a logician. Although derivative in many ways, his works have become classics, setting high standards for Sanskrit learning.

The book Deeds of the 63 Illustrious Men mentioned in the above quote has now been translated into English by Fynes and published by Oxford University Press. The book recounts in a collection of fascinating stories historical myths of the Jain religion.

One might reasonably ask at this point why we have included Hemchandra in an archive of mathematicians. The answer lies in his contribution to the Fibonacci numbers which was made fifty years before Fibonacci wrote Liber Abaci with its famous rabbit problem. Kak, in his “The Golden Mean and the Physics of Aesthetics”, explains how these entered Hemchandra’s writings. In a text written about 1150 he looked at the following problem. Suppose we assume that lines are composed of syllables which are either short or long. Suppose also that each long syllable takes twice as long to articulate as a short syllable. A line of length n contains n units where each short syllable is one unit and each long syllable is two units. Clearly a line of length n units takes the same time to articulate regardless of how it is composed. Hemchandra asks: How many different combinations of short and long syllables are possible in a line of length n?

Before we rush to try to change the name of the Fibonacci numbers into Hemchandra number it is worth noting that Gopala had studied these numbers in about 1135 and Indian mathematicians as early as the 7th century had looked at sequences which are produced by the familiar Fibonacci rule.