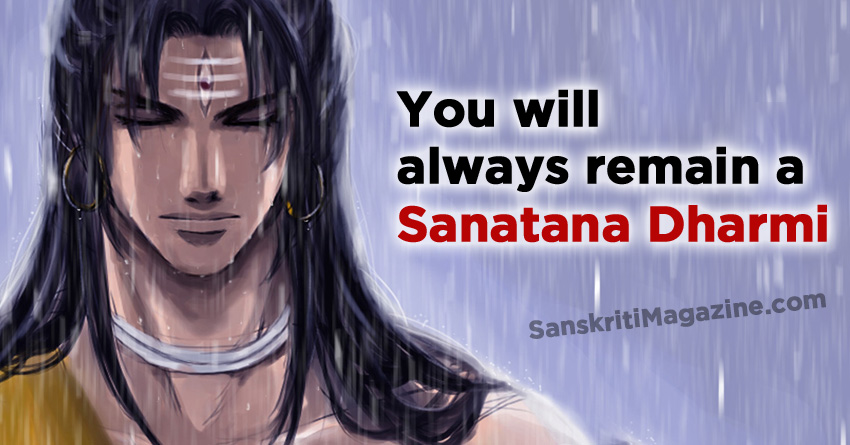 This is not an exercise in self-aggrandizement.  This is not to vilify any person or his/her faith.  This article does not set out to find faults in others’ faiths.  It directly addresses the people who have found the need to abandon Sanatana Dharma.

Sanatana Dharma believes in the universality of the method of approach to God – the Supreme Spirit – that is given different names in different faiths, but essentially means the same thing.  This attribution of legitimacy to all paths is only possible through the egalitarian outlook that is inherent in Sanatana Dharma.  That God is one no matter which path you take to reach Him/Her, I learnt only through the scriptures of Sanatana Dharma.

Your influencers might have told you that their path is the only true path.  That their God is the only true, living God.  Others are demonic.  Idolatry is evil.  You are heathen until you walk their path.  They might have already tried a bag of tricks on you and your family – money, healthcare, free education, material inducements, the caste issue, to name a few – to influence you into agreeing to convert to their faith.

Sanatana Dharma doesn’t need to do this.  Because you see, it is sanatana – eternal.  It always was, and always will be.  It did not begin as a religio-political movement in one isolated part of the world, only a few centuries ago.  It was already there.  It was not propagated by proselytisers who set forth from one part of the world to reach the heathen across the world.  After all, if everybody is equal, and God is one, why bother converting?

I leave it to your discretion to determine which of these two approaches to God is mature and conducive to spiritual advancement.

Allow me to highlight a few other differences.

Sanatana Dharma believes in the divinity of each and every living being.  We Sanatana Dharmis do not pick on any one hapless animal as being ‘dirty’, and therefore contemptible.  The Vedas proclaim that the Supreme Spirit dwells in the hearts of not just human beings, but also every living entity on the planet and beyond.  This is one of the reasons why killing animals and consuming non-vegetarian food is frowned upon in Sanatana Dharma (not banned, mind).

This being the case, how do you fresh converts take to eating non-vegetarian food?  If the faith that you have entered into is the epitome of mercy and kindness, how does it allow the everyday massacre of innocent animals just to fill your stomachs?

Anyway, let’s move on.  Sanatana Dharma is probably one of the freest of religions.  There are absolutely no compulsions in this religion.  Each person is free to exercise as much religious practice he/she wants in his/her daily life.  Yes, anything between atheism to asceticism is permitted.

We do not make it compulsory for anybody to pray a certain number of times every day.  We do not leave our work midway to go and pray when the local religious leader calls out to the ‘faithful’.  We do not congregate on a set day of the week, listen to sermons, and contribute to ‘planting’ religious centres in other countries.  We are not compelled to dress in a certain way, cover ourselves from head to foot, and consider the followers of our faith alone as brothers and sisters, and others as heathen or infidels.

Because you see, when there are compulsions within religion, it stops being a faith.  It turns into an exercise, a cult, a compulsive disorder.  How do you adjust to these new rituals and rigidities in your newfound faith?

The custodians of your new faith have probably told you that their Messiah is the only true representative of God on earth.  He has sacrificed Himself to redeem your sins.  His example is the only one that is worth emulating.  There is no other God but their God, and His Prophet is the only messenger.

Then I ask you, what about the countless divine personages that have illumined this holy land of ours?  What about their spiritual experiences, their siddhis, their message of universality of faiths, their sacrifices for the upliftment of humanity?  Are they to be overlooked as mere charlatans?  Are their messages to be discarded as heresy?

Besides, what is it that you are converting?  Your body?  Your mind?  Your soul?  Yes, you may change your name, your opinions and your daily living habits.  But how can you change your inner Self?  It is, in the words of the seers, eternal, unchangeable, birth-less and deathless.  It is a part of the Universal Whole.  It is but a drop in the endless ocean of Bliss.

Guess how I learnt about this Truth?  From Sanatana Dharma, its scriptures, and the words of its great sages.