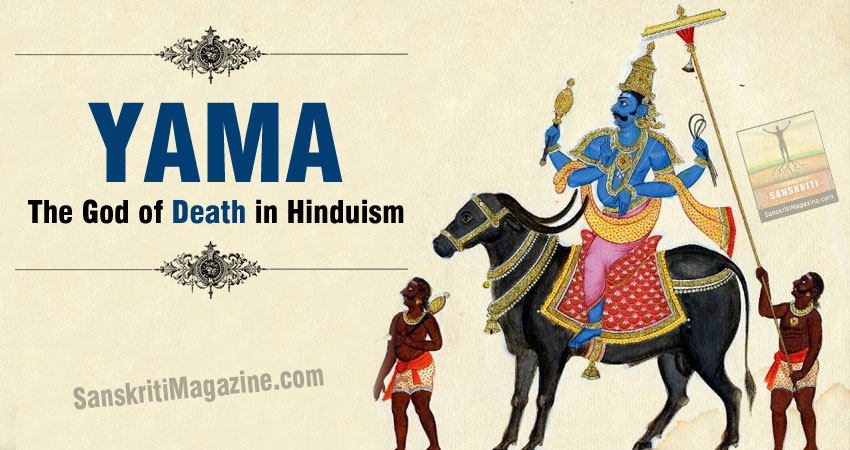 In Hinduism, Yama is the God of Death and the lord of infernal regions visited by humans after they leave this plane of existence.  He is the embodiment of the rule of law and imparts justice according to the deeds of the departed.

He is depicted as a man with dark green skin wearing blood-red robes and with coppery eyes staring out of his fearful and grim face.  He wears a glittering crown upon his head.

The word “Yama” means the restrainer and he is believed to keep mankind in check from his gloomy palace Kalichi situated in Patala.  Here he keeps a “Book of Destiny” in which each person’s span of life is recorded and maintained by Chitragupta.  They have several attendants to help them in their many tasks.

Yama’s mount is a fierce looking black buffalo, a form which he also adopts for himself on occasion.  He carries a noose in one hand and a mace in the other, one to catch those who try to run away from him and the latter represents the weapon of punishment. He has the final decision about the actions of the living being when they are finally brought before his throne.

Yama is described as the First Ancestor to die in the Vedas and carries the full distinction of a Deva.  His father Vivasvat is the embodiment of social morality while his mother, Saranyu is the daughter of Vishvakarma, the Architect of the Devas.  Yama’s twin sister Yamai, who later appears on earth as River Yamuna, has a very close bond with her brother.

He is sometimes referred to as Dharma, in reference to his unswerving dedication to maintaining order and adherence to harmony. He is also believed to be the wisest of devas.

As the regent of the South quarter, Yama is also called “Dakshinasapti”. His abode is named Yamalaya and was created by Vishvakarma on the behest of Brahma.

When Brahma created earth, heaven and the subterranean region, he felt that there was need for a place for judgement and punishment of the wicked. He asked Vishvakarma to complete this task who prepared a magnificent palace called Sanjeevani and created four pits to punish the wicked towards its southern door.  He made three other doors for the punishment of those who were to be judged.

The palace has a trench around it which is filled with water called Vaitarani where Brahma asked Agni to enter so that the water could boil.  Each person after death is required to swim across this river; it gives harmless passage to good souls but the evil ones suffer incredibly while crossing this boiling river.

Sanjeevani is believed to be about 800 miles in circumference and is free from fear, hurt or any sort of ill.  Being of a mild climate, each soul is rewarded according to their deeds.

Yama appears to everyone differently.  To the pure of heart, he appears to be like Vishnu, beautiful, charming and kind while to the pure he is seen as a fearsome figure.

He has three wives, nakely Hemamala (golden garland), Sushila (good natured) and Vijaya (victory). His two ferocious dogs, born to Sarama (the fleet one) that guards the herds of Indra have four eyes and wide nostrils.  They guard the road to Yama’s abode and sometimes wander about on earth among men as Yama’s messengers.

There are various stories about Yama in ancient texts, especially in Puranas which shed a different light of a more compassionate and kind God of Death.  One such story is that one of Satyavan and Savitri, a princess from Mahabharata who remained faithful to her husband unto death and beyond.

Found in “The Book of the Forest” of the Mahabharata, Savitri’s story is of beating all odds in life through true love and devotion.  Savitri fell in love with Satyavan, a poor prince whose blind father was a king living in exile in a forest.  Satyavan was destined to die within a year but Savitri refused to change her mind and married the prince.

When Yama came to take Satyavan’s soul on the day of his death, Savitri begged him not to do so.  However, Yama told her that it was inevitable as no one could stop death.  Savitri continued to follow them for miles and finally Yama, impressed by her determination, gave her two boons on the condition that she not ask for her husband’s life back.

For the first boon, Savitri asked for the well-being of her father-in-law and for the second one she asked for a hundred sons.  Yama, in a hurry, granted her boon without giving a second thought to the implication of her request.  At this, Savitri asked how she could be a mother without her husband and Yama had no choice but to give her husband back to her.

Many such legends exist in the Vedic text although they are mostly of a fearsome, rod-bearer bent on punishing people for deeds or misdeeds committed in their lives.

The Vedic Yama was the basis for the Buddhist Yama which in turn became an essential part of Chinese and Japanese folklore.

Diversity is in the DNA of Hinduism
Mahabharata: Fate and Free Will
Comment