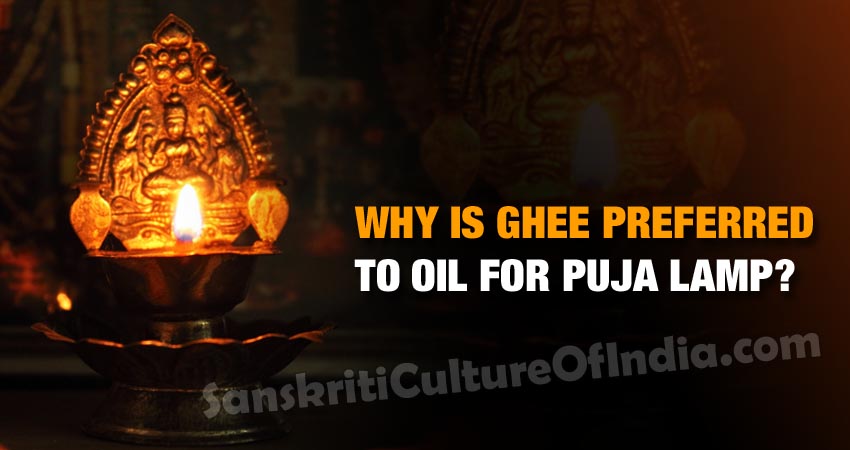 Worship of a deity is a subject of faith for all of us. We build a temple room in our house and decorate it well. We also keep the images or idols of the deities we like and perform daily puja (ritualistic worship).We purchase the articles of puja according to our capacity. We are also quite familiar with such articles like kalash (a water vessel generally of metal), shankh(conch ), a copper plate, a copper vessel, a small spoon, a lamp etc. Every article of puja has its own significance. Let us understand the significance of an important article of puja that is lamp.

1. Importance of lamp in Hindu Dharma

The lamp has its own special place in Sanatan Vaidik Hindu Dharma. It is a form and a symbol of Tej (Absolute fire principle). The lamp is invoked as, ‘तमसो मा ज्‍योतिर्गमय ।’ meaning the lamp leads us from darkness towards light. It burns only to give message of peace and light to the man. This is its greatness. In this Satsang we shall try to understand what the scriptures have to say about the lamp. Amongst the articles of puja the lamp is an important article. The following mantra which is recited during the ritual of puja explains its significance.

Meaning: O Deity of lamp, you are of the form of Bramhan (the absolute truth). You are full of radiance. You never wither. Please bestow me health and good progeny and please fulfill my wishes.

2. Characteristics of oil and ghee lamps

Agni Puran clearly states that only oil or Ghee (clarified butter) be used in the lamp meant for puja and no other combustible substance. According to the Science of spirituality the lamp with clarified butter is more sattvik (spiritually pure) as compared to lamp in which oil is used. This is an important aspect which we will try to understand in details. So let us see the difference between the the lamp in which Ghee is used and the one with oil.

Effects of both types of lamp on the worshipper. 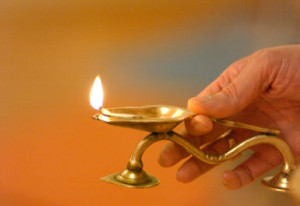 According to yogic path of Kundalini Yog there are seven principle chakras or energy centers in the human being. These chakrasinfluence practically every aspect of human being including physical body, mind and intellect. The oil lamp is effective in purification of Muladhar and Swadhishthan Chakra only to certain

extent but the ghee lamp purifies Manipur and  Anahat chakrasto a significant  extent.

Just as there are seven chakras in the human body, there are paths for the flow of vital energy (chetana). These are called asNadis or channels. The three principle nadis are Chandra nadi (Moon channel), Surya nadi (Sun channel) and Sushumna nadi.When Chandra nadi is active the person perceives coolness. The activation of Surya nadi imparts energy to the person. TheSushumna nadi is activated when the person starts progressing spiritually. The oil lamp activates the Surya nadi of the person while ghee lamp activates only that nadi which is essential to the worshipper in a particular action.

2.2 Effect on the subtle sheaths of the worshipper

According to the science of spirituality the body which is visible to our eyes is called Annamaya Kosha or food sheath. Besides this there are four other Koshas namely Pranmaya Kosha or vital air sheath, Manomaya Kosha or the mental sheath, Vidnyanmaya Kosha or sheath of intellect and Anandmaya Kosha or bliss sheath. The Pranmaya kosha  is a seat for the Pancha pranas (five vital air elements) which provides energy to the gross body. The second Manomaya kosha is the seat of emotions. The thirdVidnyanmaya Kosha is the seat of intellect and the fourth Anandamaya Kosha is the seat of Soul which is of the nature of existence, consciousness and bliss (satchidananda). Even these subtle sheaths or koshas are affected by the oil or ghee lamps. The oil lamp imparts power to the raja paricles in the Pranamaya kosha which makes the individual rstless. The ghee lamp strengthens the sattva particles of Pranamaya kosha and Manomaya Kosha and as a result of this the jiva (individual, embodied soul) becomes peaceful,stable and happy. 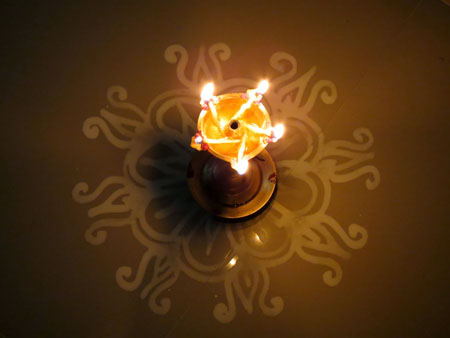 2.4 Why only ghee prepared from cow’s milk should be used?

Generally any oil lamp emits frequencies consisting of raja particles but the sesame oil emits some sattva frequencies also. Therefore the lamp with sesame oil is comparatively more sattvik. However the ghee lamp emits the sattvik frequencies in  maximum amount compared to any oil lamp. Here we have to remember one thing that it is useful use ghee prepared only from the cow’s milk in the lamp lit in front of Deity. This is because in such ghee the Deites’ principles are already existent. Such a ghee which is dominant in sattva component emits luminous figures in the atmosphere. Such luminous figures are forms of Tej tattva or absolute fire element. Thus even though the use of ghee is recommended because of its capacity to emit maximumsattva frequencies, we can use sesame oil lamp if the use of ghee is not possible because of financial restraints or otherwise.

2.5 Points to be considered while using a lamp

3. Should electric bulbs be used instead of ghee lamps?

Now a days we see electric bulbs in use during the puja ritual instead of ghee lamp. What is the difference between two from the point of view of Spiritual science? 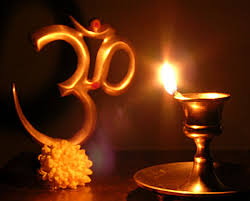 There are other varieties of the lamps also such as lamp with a single wick and lamp called niranjan wherein five wicks are used. The Niranjan with five wicks is symbolic of duality that is the manifest energy of a deity, whereas the lamp with a single wick attracts sattvik frequencies the lamp with five wicks attracts waves with destroyer property and dominant in raja component. Theniranjan with five wicks denotes the relation of Panchpran (five vital air principles) with the Atmajyoti (flame of soul). Niranjan is used for waving Pancharati. Every  single flame of niranjan is symbolic of Atmajyoti. Pancharti means invocation of God with the help of panchparanas.While performing Pancharti we should have such a spiritual emotion that the Atmajyoti is kindled in me with the help of five panchaprans present in the body and I am performing the arti with such flame.

5. Why should a straight wick be used as compared to puffed up wick? 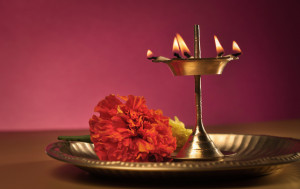 During puja ritual a lamp is offered at various steps of the ritual according to purpose. For example performance of arti. Two types of wicks are used in the lamp namely Puffed wick and straight wick. Nowadays a puffed wick is used in a ghee lamp or niranjan and used as lamp of worship. The wick is puffedup from below to offer it stability to stand in the center of niranjan. The puffed wick is used in a ghee lamp. This type of wick is relatively of recent origin.The second type of wick which we all are familiar with is straight wick. Two straight wicks are joined together like a thread and used in a lamp. Not only there is difference between the two on a gross form but also on spiritual level.

According to science of spirituality Tej tattva is more powerful than either Pruthvi tatva or Aap tattva. As a result the use of fulwatimparts heaviness to the physical body while the use of straight imparts cheerfulness to mind.

Thus we have seen the difference between the fulwat and straight wick and also why it is important to use straight wick.