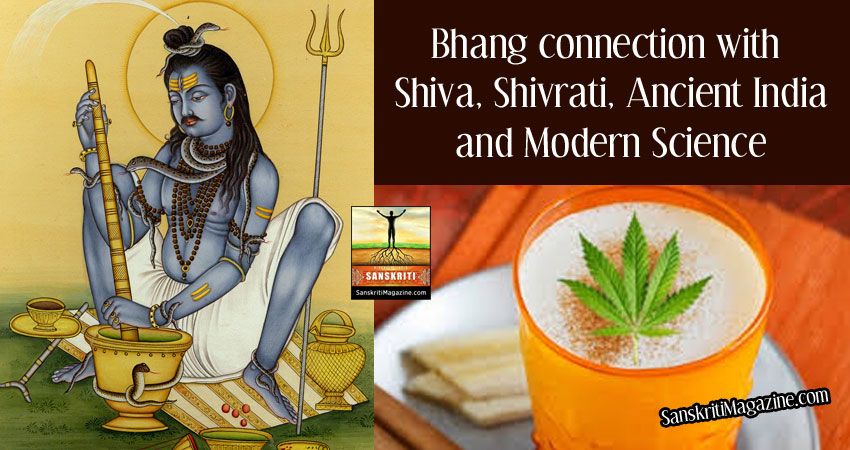 Many of you must have asked this question so many times. Why does Lord Shiva drink Bhang? For those who are not familiar with Bhang, it is an intoxicating drink made from the leaves and flowers of the female cannabis plant. It is an ancient Indian drink which is believed to be the ‘nectar of the Gods’. Bhang is often stigmatised because of its marijuana content. However, according to the ancient Hindu texts, Bhang is one of the most effective, natural medicines available to mankind. It has known to be the cure for many nervous disorders, skin diseases and wounds.

Coming back to the question:

Some people ask  Why Lord Shiva drinks Bhang or smokes Ganja? Why do all the shaiv sadhus smoke Ganja all the time? Isn’t it a drug? Do our Hindu religious leaders take drugs? Or worse, does one of our Trinity, Lord Shiva Himself, promote drugs?

Bhang or Ganja are extracts of a plant called Cannabis Sativa, also known as Marijuana or Cannabis or Weed or Pot in the western world. In their ignorance, Americans put it into the category of illegal substances or illegal drugs and subsequently, it has been made illegal in India as well and therefore many Hindus themselves have started thinking that it is bad for us. I’ve seen even some fake ayurvedic doctors (and websites) following western doctors and claiming that bhang is a harmful drug.

According to the Vedas, when the ocean was churned by the Gods and the demons for acquiring the nectar, a drop of the nectar fell on Mount Madra. A plant sprouted out from the drop and the drink made from the leaves of the plant became a favourite of all Gods, including Lord Shiva. After that Lord Shiva brought the cannabis down from the Himalayas for the pleasure of mankind. 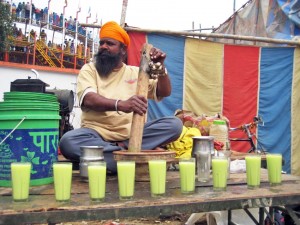 Bhang is also believed to be the sister of Goddess Ganga. That is why Bhang and Ganga are said to reside side by side on Shiva’s head. Another interpretation of this story is that the plant of cannabis is actually another form of Parvati and She also resides with Shiva along with her sister Ganga.

Ancient texts often describe the Gods consuming the Soma rasa which is often said to be Bhang. However, it is not clear whether Soma and Bhang are the same thing or different drinks.

It is believed that since Lord Shiva is always in deep meditation, Bhang helps Him to stay in a state of complete bliss and concentrate. This is the reason why the sadhus and monks consume Bhang and smoke marijuana so that they can reach a blissful state and be like Shiva.

These were a few theories about why Lord Shiva drinks Bhang. But whatever the reason may be, drinking Bhang is one of the most important activities during Shivaratri. It is believed to cure many ailments and relieve all sorts of pain.

BUT now western scientists are discovering that Bhang is one of the most effective natural medicines available to man – This is something that Hindu scientists had already discovered at thousands of years ago!

Since western doctors are realizing the truth, today they use Bhang/Ganja/Cannabis/Marijuana for treating Cancer, Aids/HIV, Multiple Sclerosis (MS), chronic pains, depression patients etc. and they’re discovering its new applications every day! But our own Ayurveda mentioned the medicinal properties of Bhang/Ganja so long ago! In fact, Marijuana is mentioned in Rig Veda, Atharva Veda, Ayurveda and many other ancient Hindu texts! Some of the uses of Bhang that ancient Hindu scientists discovered thousands of years ago are – Dyspepsia, Nervous disorders, Severe pain, Insomania, Dysentery, Gonorrhoea, Loss of appetite because of illness and even poisoning. It’s AMAZING that our ancient Hindu doctors were able to learn so much that western scientists are still catching up!

Before closing, I’d like to mention one more thing – Alcohol has already been considered bad in Hindu society but Bhang isn’t (at least not until Indian government started following western governments). Both Bhang and Alcohol cause euphoria, pleasant feelings and more, so their effects seem very similar. BUT ancient Hindu scientists knew that alcohol is bad for human body but Bhang is a medicine. And now science has shown that Alcohol actually is bad for human body. Any type of alcohol causes hypertension, cancer and more. Bhang on the other hand cures all of these problems! There was no way for ancient Hindus to know all this but still somehow they knew! I’m always amazed at how our ancestors learned all that they did and I wish that we start paying more attention to our own Ayurveda and even guide western scientists with what our ancestors, the great Hindu scientists & doctors already taught us!

A Brief History of Bhang
Bhang was first used as an intoxicant in India thousands of years ago and soon became an integral part of Hindu culture. In the ancient text Artharvaveda, Bhang is described as a beneficial herb that “releases anxiety”. Bhang preparations were sacred to Gods, particularly Shiva. One of Shiva’s epithets was “Lord of Bhang” as he is said to have discovered the transcendental properties of the mixture.

In imitation of Shiva, many sadhus use Bhang to boost meditation and achieve transcendental states. Besides, Bhang or cannabis is also believed to be popular amongst Sufis as an aid to spiritual ecstasy since a long time. 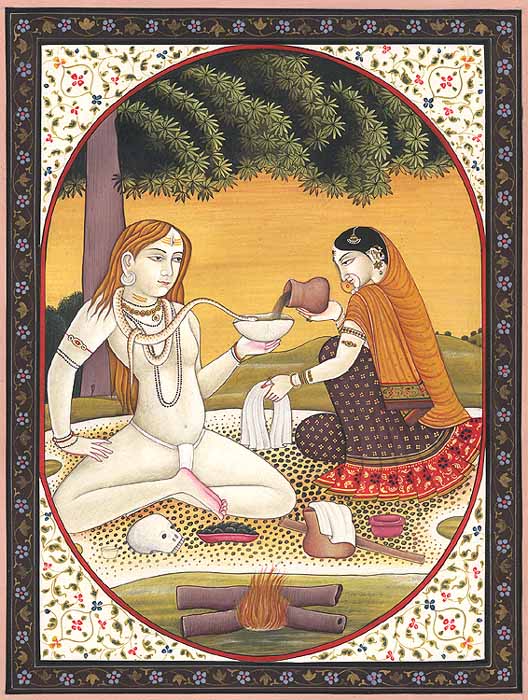 Bond with the Bhang
Ancient as it is, bhang has become a inseparable part of Indian tradition. So much so that it has become symbolic for a lot of things. They might be, or rather they are, pure superstitious believes. But if one understands the inherent sentimental and emotional nature of Indians, one can very easily feel the emotional bond people have with bhang.

Associated with Lord Shiva, hemp plant is regarded holy by the Hindus. There is even a belief that to meet someone carrying bhang is an omen of success. And, if longing for hemp plant foretells happiness, to see it in dreams ensures prosperity for a person in future. Also, walking underfoot a holy bhang leaf spells doom for a person.

People also strongly believe in the medicinal properties of the hemp plant. If taken in proper quantity bhang cures fever, dysentery and sunstroke. It helps to clear phlegm, quicken digestion, sharpen appetite, cure speak imperfection and lispering. Besides, it freshens the intellect and gives alertness to the body and gaiety to the mind.

The plant has an ancient relationship with humankind, and has long been cultivated as a source of medicine (the buds), fiber (the stalks), and food (the seeds). It has been found in neolithic Chinese archaeological sites, and is mentioned in the earliest Chinese pharmacopoeias. In India it is associated with Shiva and has played an important role in religious life as a sacred inebriant.

What is Makar Sankranti?
Karna – Ideal, If not perfect
Comment