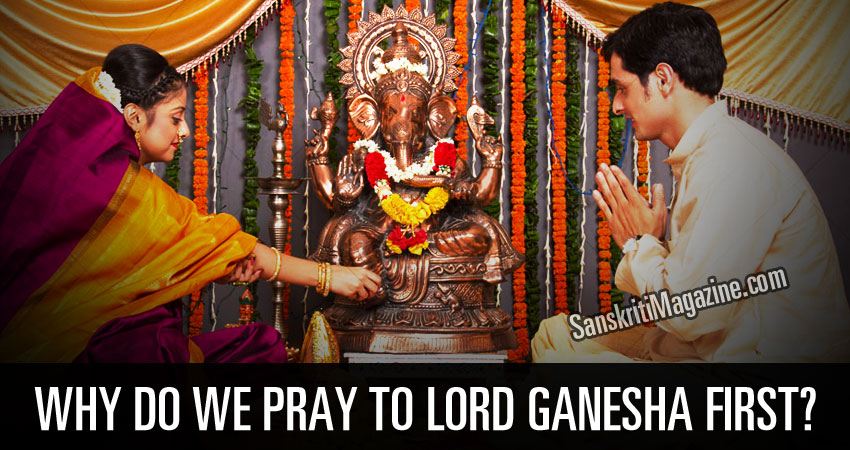 God’s intentions are codified and indicated in the great textbooks on dharma, which preach the higher values of life, that is, the ethical and moral rules of life.  Live well… live in kindness, love and understanding.    ~ Swami Chinmayananda

Also known as Vighanharta, the obstacle remover, Lord Ganesha is the most revered of Hindu gods.  As the master of Riddhi (prosperity) and Siddhi (spiritual power), he is remembered and offered prayers to prior to any other prayers, special ceremonies or occasions.

He removes all obstacles that confront his devotees and prayers or offering to him is believed to ensure success, wealth and prosperity in any endeavors. 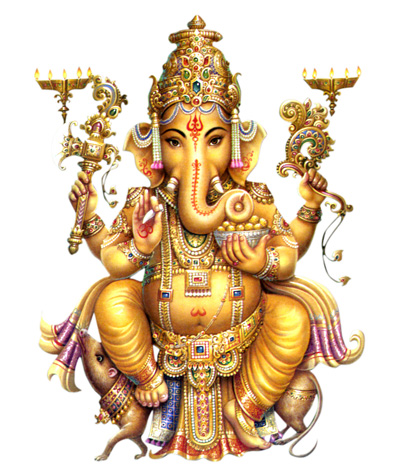 O Ganapati, with twisted tusk and great body,
and the one who shines with the brilliance of ten million suns,
please remove obstacles in my path always and in all times.

Ganesha is the God of learning and knowledge and his devotion teaches one to be responsible and be farsighted enough to differentiate between good and bad.  This is one of the main purposes of invoking Ganesha before any important event.

There are two different versions of stories that illustrate the importance of this custom.

In Padma Purana there once arose a question among Gods on whom they should consider to be the most revered.  To resolve this issue, they all went to Brahma who declared that the one who circumnavigates around the world the fastest will be entitled to the utmost respect.

Ganesha went to a surprised Brahma after completing these seven rounds who asked him how he had completed such a long journey in such a short period of time.

Ganesha explained what he had done and that Ram’s name was an embodiment of the Supreme Spirit not only on this earth but the entire universe as well.

Brahma was quite pleased with the explanation and declared Ganesha to be the most revered among the Gods.

In Shiva Purana, the Gods went to Lord Shiva to inquire who should be the chief amongst them.  Lord Shiva suggested that the one who went around the earth three times and returned to Mount Kailash first would be the most revered of all.

Ganesha’s mode of transportation was a mouse and quite slow to undertake such a journey compared to everyone else’s.  Without hesitation, he went around Shiva and Parvati three times and stood in front of them humbly with folded hands, signifying the completion of his task.

Delighted at the ingenuity of his son, Lord Shiva told him that no one could be as clever and intelligent as him and by circumnavigating around his parents, he had achieved far more than going around the world three times.

The Puranas also state that Ganesha is easily pleased when offered durva grass with three or five nodes.

There was once a ruthless demon named Anlasur who created havoc not only on earth but in the land of the Gods as well.  He did not spare anyone and ate people alive, spreading terror in his wake.

Indra tried to overpower him many times by engaging in battle but Anlasur was beyond control.  Shocked and dismayed by his terror, the Gods went to Lord Shiva for help.  They were told that only Ganesha could help them as he was pot-bellied and could swallow the demon.

Ganesha agreed to help the Gods and caught Anlasur and swallowed him whole.  However, this created a strange burning sensation in his belly which could not be rid of no matter what he tried.

When Sage Kashyap heard of Ganesha’s plight, he went to Mount Kailash and collecte 21 stems of durva grass.  He offered these to Ganesha who ate the grass and quenched the burning sensation from his stomach.

Ganesha is also fond of modak or ladoos as they are popularly called, without which any offering to him is incomplete. 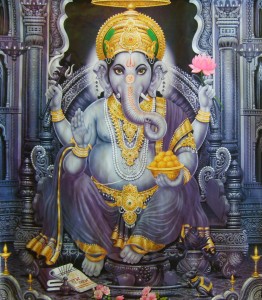 Ganesha’s love of sweets is evident in this vandana and all devotees offer a variety of ladoos to him to have their desires fulfilled.

Modak is derived from two words: “mode” which means pleasure and “k” symbolizing a small amount.  This literally means something that gives pleasure even when it is in a small quantity or when seen.  Offering of sweets is reciprocated by Ganesha by giving his devotee great pleasure and happiness.

One narration says that just as knowledge is symbolic of a modak, which is sweet, so is the blessing of knowledge sweet too.

In Ganapati Athvarshirsh it is said:

There is a story in Padma Purana about the fondness Ganesha has for jaggery (brown sugar).

Once when all gods came to meet Ganesha and Kartikeya, they presented Goddess Parvati with a divine ladoo in appreciation.

“This ladoo smells of the exilir of immortality.  Without doubt whoever smells its fragrance or eats it will become most knowledgeable in every aspect of learning”.

Both brothers eagerly asked for it; however the Goddess could not decide which one of her two sons deserved it more.  To settle the matter, she said, “Whoever of you can prove your superiority through sincere and honest action shall get this ladoo”.

Kartikeya immediately left for a round of the universe seated on Mayur and within a short period he had visited all the places of pilgrimage.

Ganesha, on the other hand, went around his parents in all sincerity, and standing before them with folded hands said, “Fasting, making offerings or visiting places of worship and pilgrimage do not equal one-sixteenth of the devotion for one’s parents.  Therefore, I rightfully deserve to get this ladoo”.

Happy with his reasoning, Parvati gave Ganesha the ladoo along with the blessing that due to the devotion he has shown his parents, he will forever be revered by everyone and the first offering will always be made to him.

Sati Pratha – Truth and Facts
The Rings of Rama
Comment