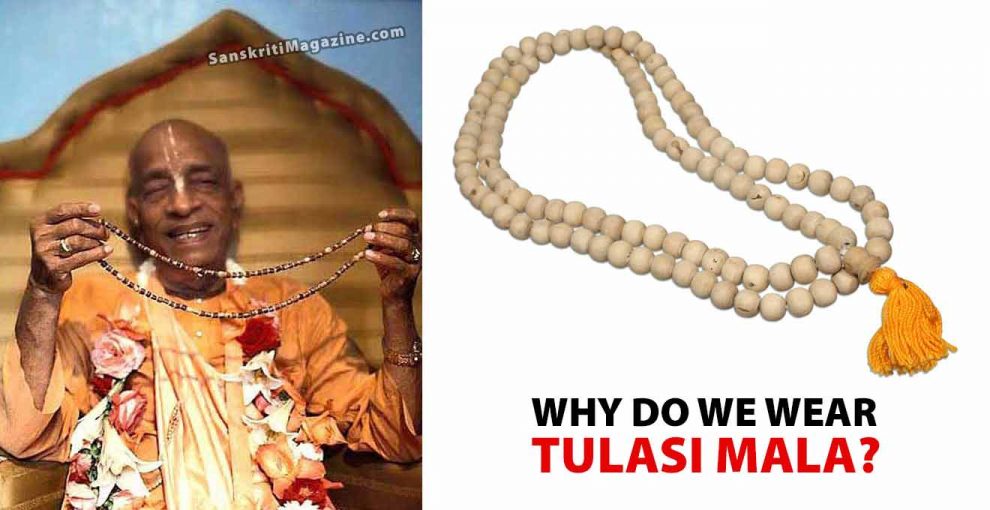 The tulsi mala or a rosary made from the holy Tulsi plant, is a beautiful thing to possess and wear. Hindus see the tulsi mala – the light, chandan-coloured one  as a way to connect to Vishnu or any of his avatars like Krishna and Rama, while the Buddhists prefer the black tulsi mala (see photo below) to chant and usher in good fortune.

As soon as you wear the tulsi mala, around your neck or around your wrist, you feel protected and focussed. It actually goes a long way in helping you deal with the stress of modern life. If time permits, you can simply chant Hare Krishna Hare Krishna Krishna Krishna Hare Hare/Hare Rama Hare Rama Rama Rama Hare Hare. Some people believe that this mere chant is enough for salvation in this dark age called Kali Yuga, but even this seems a difficult task for people to do, such is the manifestation of this age.

All people who use a rosary or mala around the world and following different religions will acknowledge that holding it in your hand enchances one’s concentration on the prayer. There’s a certain path you follow while using the beads and that makes praying a concrete and real affair. Krishna devotees believe that increased chanting brings you closer to God.

How to use the mala: The Japa Mala has 108 beads set in a loop, with one big bead which represents Krishna. To chant, one starts with the smaller of the two beads set next to the Krishna bead, holding it with the thumb and the middle finger, and then begins chanting. After finishing one complete round, one starts on the opposite side, instead of crossing over the Krishna bead, considered disrespectful. 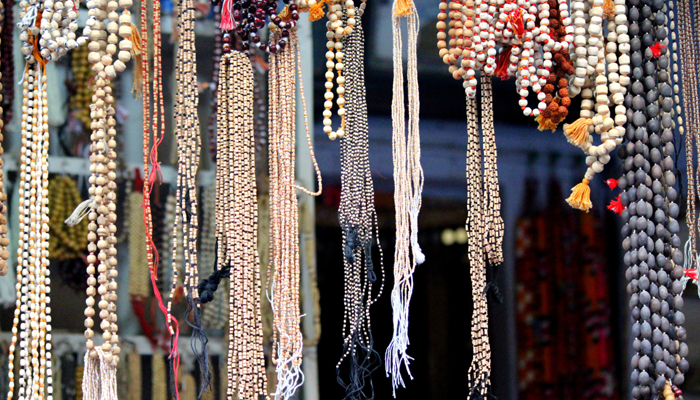 Chanting involves to reciting mantras or shlokas which creates a musical aura around one, helping one to enjoy the meditation time. You can close your eyes, if not driving, and conncet with the Greater Force. You can even carry your mala in a bag available nowadays where another person does not really see you counting the beads. This helps you create some privacy in a public place like the Metro. Sitting in your puja room or space allows you to light a fragrant incense to enhance the whole experience.

The sacred tulsi: Tulsi or basil is a sacred plant in Hindu tradition, worshipped in traditional Hindu households in the front courtyard, and in modern day apartments in a corner of the balcony.

It is customary for married women in Hindu households to offer prayers to the Tulsi Goddess for the well-being of their families. The ritual involves circumambulating the plant and offering water to it, as tulsi is one plant which needs water and sunlight every day.

The tulsi leaves are very dear to Lord Vishnu and whenever a prasad is offered to God, tulsi leaves sprinkled on it is regarded as auspicious.

The following are some verses from the Hari Bhakti Vilasa

One who engages in the worship of ŚrīJanārdana while wearing tulasīneckbeads accumulates piety equivalent to giving ten thousand cows in charity for each of his flower offerings.

A person who wears tulasīneckbeads all the time obtains the result of living in Dvārakā.

There is no need to perform atonement for a person who wears tulasīneckbeads. Factually, he does not become contaminated at any stage in his life. ŚrīHari resides in the body of a person whose neck and arms are decorated with ornament made of tulasī. 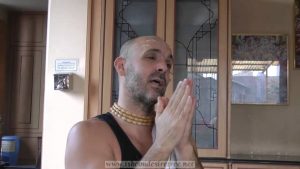 Just by seeing the tulasī beads on a person’s neck, the Yamadūtas flee to a distant place. A person who wanders here and there after putting on tulasīneckbeads has nothing to fear from an accident, bad dreams, or weapons.

In the Padma Purāna there is a statement describing how a Vaisnava should decorate his body with tilaka and beads: “Persons who put tulasī beads on the neck, who mark twelve places of their bodies as Visnu temples with Visnu’s symbolic representations [the four items held in the four hands of Lord Visnu—conch, mace, disc and lotus], and who have visnu-tilaka on their foreheads, are to be understood as the devotees of Lord Visnu in this world. Their presence makes the world purified, and anywhere they remain, they make that place as good as Vaikuntha.”

“Tulasi is one devotee who appears wherever there is devotion to Krsna. Tulasi’s body is spiritual. Tulasi leaves should be offered to the Deity.”

“Just as a pet dog has got a collar, similarly we are pet dogs of God. So we have got this collar. And Yamaraja, the Lord of Death will understand that he-the devotee-is God’s dog; he should not be shot down.BecauseTulasikanthi is so important they are never taken off, but they can be replaced. Anyone who wears Tulasineckbeads at the time of death is greatly benefited beyond imagination, therefore it is important to keep them on at all times. Tulasi also identifies one as a follower of Lord Chaitanya. “

SrilaBhaktivinodaThakura sings in his Svīkara: Acceptance of Activities Favorable to Pure Devotion – 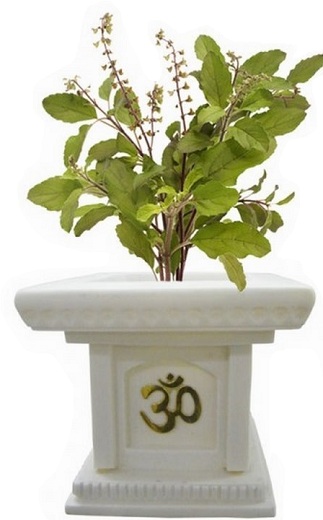 I will put on the garb that is dear to the devotees of Lord Gaura-sundara, including the twelve Vaisnavatilaka markings on my body and beautiful beads of tulasī wood around my neck.

SrilaBhaktivinoda Thakur also writes in his Jaiva Dharma that of the 64 angas of devotional service the remaining fourty-four are observed to increase one’s bhakti. Item number one is decoration of the body with the Vaisnava signs of tilaka and tulasī beads.

Q. One may ask that if we are not the body then what is the need of instructions of decoration of the body?

A. Yes we are not the body but unless were are Paramahamsa pure devotees then we are still conditioned by the body. We don’t want to become falsely transcendental and reject those good things that the greatly intelligent pure devotees has suggested for our spiritual welfare. Yes, if we are not the body then we also do not need to eat, but because this body is Krishna’s property we take care of it and because this body is Krishna’s property we decorate it in vedic way.

The Worshiping of Srimati Tulasi-devi

“Every home with a Tulasi plant is a place of pilgrimage, and no diseases, messengers of Yama, the God of Death, can enter it.”
Skandapurana 2, 4, 8, 13 Padmapurana Uttarakhanda

Wherever the aroma of Tulasi is carried by the wind, it purifies the atmosphere and frees all animals from all baser tendencies.”
Padmapurana, Uttarakhanda

“Vishnu, the Lord of the Three Worlds, takes up abode in the village or the house where Tulasi is grown. In such a house no one suffers calamities like poverty, illness or separations from dear ones.” Padmapurana, Uttarakhanda, 6-24-31-32