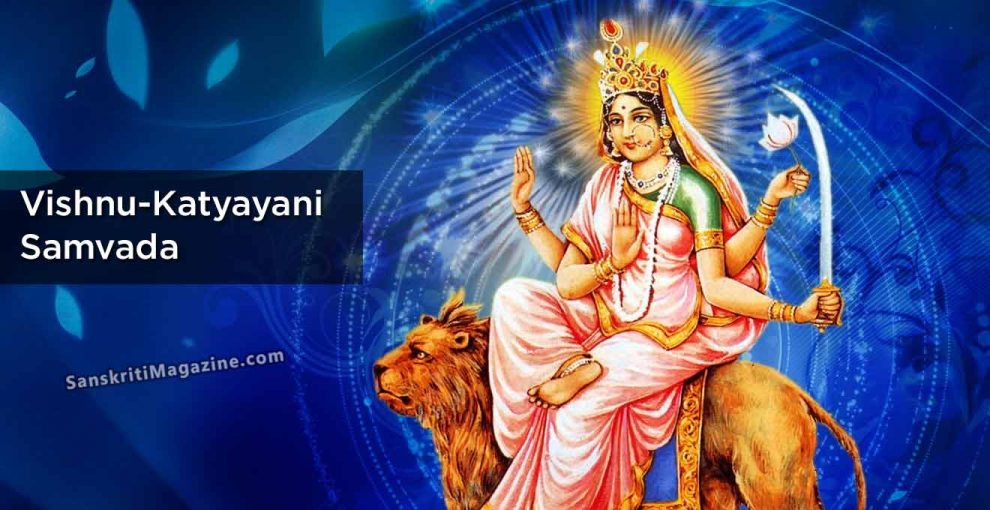 Parvati said, ‘One of my names is Vaisnavi; and I also have devotion for Lord Vishnu. Now before this assembly, I make a solemn vow. If Lord Narayana bestows His compassion upon me, I will make sure that the Lord’ s maha-prasada is distributed to everyone throughout tee universe, even to the dogs and jackals.’

“At that moment, the Lord of Vaikuntha, Vishnu Himself, arrived in Kailasa to uphold Parvati’s promise.

Respectfully, Parvati stood up and offered obeisances to the Lord. With tears in her eyes, she let out a sigh and told her problem to the Lord.” In a joyful mood, I, Locana Dasa narrate this story.

Murari Gupta continued speaking to Damodara Pandita. “Then Lord Vishnu spoke in a sweet voice, ‘Katyayani, don’t be in ignorance. You are My adya- sakti, and ,through you I manifest the entire material creation. I know that you have devotion for Me. ‘You are My prakrti svarupini [the form of Vishnu’s energy]. 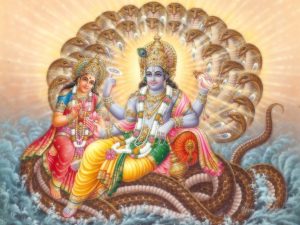 You always engage in My devotional service. Without you, the material creation can’t exist. The whole creation worships you and your husband, Lord Siva, as Hara and Gauri knowing that you both are My very self. Pleasing you removes the. misconception that you and Lord Siva are different from Me. Please be assured I will keep your promise. I will personally distribute My maha-prasada to everyone in the univere.’

“Lord Vishnu, the possessor of all jewel-like qualities, continued speaking. ‘Listen, Katyayani Devi. Now I’ll tell you a secret about an ancient episode which will alleviate the miseries of the material world. No one knows the inner meaning of the story concerning the demigods’ churning of the ‘ocean of nectar. They used Mandara mountain a,s the churning rod, and Vasuki, the king of the snakes, as the rope. The first object they produced from churning was a kalpa- taru, a tree which gives unlimited wealth and fulfills all a person desires.

‘Within that special tree there was a transcendental effulgence emanating from the beautiful form of Lord Caitanya, the supreme embodiment of pure mercy. There has never been a form or incarnation equal to the form of Sri Krishna Caitanya. He is the fountainhead of all incarnations. He will appear in the word, displaying His transcendental pastimes. By preaching Krishna consciousness, I will distribute My mercy to the people in general.

‘In the age of Kali, I will manifest the golden form of Sri Gauranga Mahaprabhu to propagate the sankirtana-yajna, congregational chanting of My holy names. Taking the form of the golden avatara, I will fulfill your vow Parvati, ‘and give love of Krishna to everyone. Please keep this confidential topic secret. In the form of Lord Gauranga, the essence of all incarnations and full of all transcendental qualities, I will deliver all people in Kali-yuga.’ ‘7he preceding conversation between Lord Vishnu and Parvati Devi, which is called the Vishnu-Katyayani Samvada, was taken from the Padma Purana. King Prataparudra, who.was an ocean of transcendental qualities, distributed these teachings throughout his empire.

“Narada Muni continued talking to Lord Siva. ‘Mahesa, the L6rd ordered me to announce His upcoming appearance in Kali-yuga. At that time, the Lord and His eternal associates will descend to earth to remove all calamities. The Supreme Lord in the form of Lord Gauranga will appear in a brahmana family.’

“Lord Siva and Parvati Devi became happy after heating the good news from Narada. Bliss filled the home of Lord Siva as everyone loudly chanted the holy names of the Lord. Sounds of “.Had! Had!” vibrated everywhere. Playing sweetly on his vina, Narada Muni left Mt. Kailasa