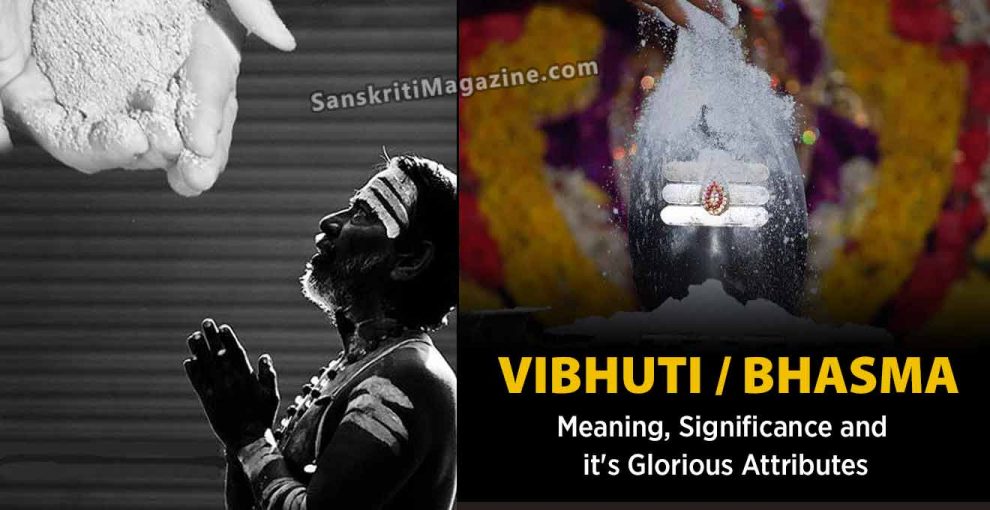 Vibhuti (Sanskrit : vibhūti ; Tamil : Thiruneeru ) is a word that has several meanings in Hinduism. Generally, it is used to denote the sacred ash which is made of burnt dried wood in Vedic rituals. The Hindu devotees make a paste by mixing vibhuhti with water and apply it as three horizontal lines across the forehead and other parts of the body to please Lord Shiva. Vibhuti smeared across the forehead to the end of both eyebrows is called Tripundra. .

In Sanskrit, Bhoothi means Aishwaryam, meaning wealth, treasure, precious. Vi-bhoothi with an Upasarga (preposition “vi”) means very or more valuable. The synonyms of Vibhuti in Sanskrit as said in the Amara-kosha is “Vibhuti: bhoothi: Aishwaryam”. Vibhuti can also be called as Bhoothi,Aishwaryam,Basma etc.,. 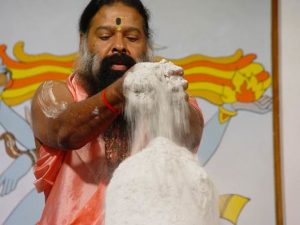 Vedic scriptures say as follows “Lalaata Shoonyam Smashaana Tulyam”,which means that “an empty forehead is comparable to a cemetery”. So, Hindus pay special attention that their forehead is smeared with vibhooti and it remains all the time over their body in a day. Even the Almighty Lord Shiva who sports vibhuti all the time stands as an example to his followers that however one be considered as great person in this mortal world,he needs to smear his forehead and the body with holy ash prepared from a special kind of wood as he does (Lord Shiva) in the Immortal adobe of Kailasa. So,it is considered by vedic scholars that even great saints,seers,yogis and the like should wear vibhuti all the time over forehead and other parts of the body in form of three lines to make a Tripundra. Vibhuti smeared horizontally to make three parallel lines with forefinger,middle finger and ring finger across the forehead & other parts of the body like chest, stomach, arms, elbows, wrists etc is called as Tripundra.It is mandatory for the devotees of Lord Shiva to have Tripundra over their body all the time.A person who smears Vibhuti purifies himself from sins and also removes the sins of persons who looks at him besmeared with Vibhuti or theeruneru.

The great saint Thiru Gyaana Sambandar did many wonders with Vibhuti and he expounds the greatness of Vibhuti in one of his Pathigams called “Thiruneetru Pathigam” as follows, 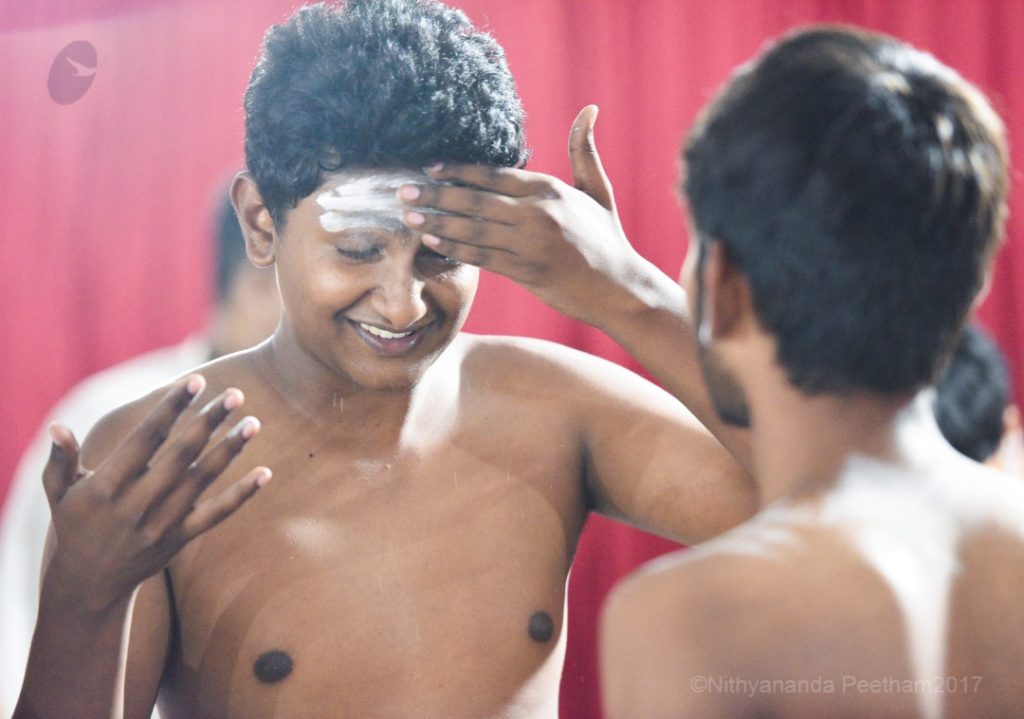 Panchakshara mantra and the above Pathigam are generally recited by devotees while smearing Vibhuti.Winning the Jains in the challenge on fire Thirugnana Sambandhar sang the above marvelous hymn Thiruppaachuram explaining the king and the world the limitless grace and glory of Lord Shiva and won the Jains in the water challenge.Thiru Gyana sambandar won the Jains and re-converted the king and his people back to Shaivism by Vibhutireciting the above Pathigam.

Vibhutiis the sacred ash used in religious worship in Hinduism.The main ingredient of Vibuthi is a special kind of wood. It is burned in a sacred fire (Homa)to form white ash. Vibhutiis placed on the forehead as it is considered sacred and holy.

Scriptures say that Vibhutishould not wasted by spilling it in on floor or walls after receiving it as a Prasaad(consecrated substance) from a Shiva Temple.Goddess Bhoomi Devi(the Goddess of Earth) cannot tolerate the weight of certain substances.They are Vibhuti, Tulsi(basil) leaves, Sacred Deepa(lamp), Sacred Thread etc., due to their sacredness. So, they are kept over a Asanam(throne) to give respect to those articles.They are not kept on the floor directly. 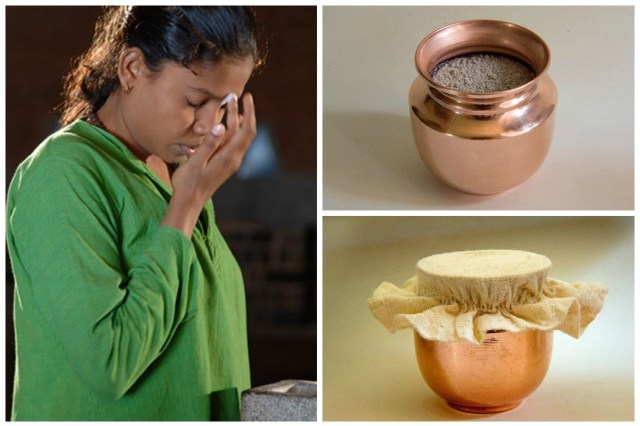 The ash has several symbolic meanings:

It serves as a reminder to the believer to cast away selfish and worldly desires that wrap the self in maya, and calls to mind the story of how Shiva burned Kama (the god of desire) to ashes when Kama attempted to break Shiva’s focus on the Divine Truth.

Normally worn along with red tilaka. Vibhuti relates to Shiva and Red tilaka to Shakti. Reminds that Shiva and Shakti form the universe and everything is though the union of Shiva and Shakti.

Vibhuti may refer to glorious attributes of the divine, and in this context is translated as ‘all pervading’, ‘superhuman power’, ‘wealth’ and so on.

The ash of any burnt object is not regarded as holy ash.Vibhuti (AKA Bhasma,Thiruneeru, the holy ash) is the ash from the Homa (consecrated fire) where wood is used to perform the ritual. Or the deity is worshipped by pouring ash as abhisheka and is then distributed as Prassad to devotees. Bhasma is generally applied on the forehead,neck,chest,arms,stomach elbow,wrists etc.,. Some apply it on other parts of the body, like the knees,toes,scalp etc.,.It is considered very auspicious for the hindus especially shaiva sect of people to smear Vibhuti all over the body.

Sri Adi Shankaracharya praises the greatness of Vibhuti Of Lord Murugan in his “Sri Subramnaya Bhujanga Stotra” as follows ,

Meaning: Oh Conqueror of Taraka! Severe epilepsy, leprosy, consumption, lung diseases, venereal diseases, fevers, mental diseases of all types, they run away the moment they see Thy Vibhuti contained in a leaf. 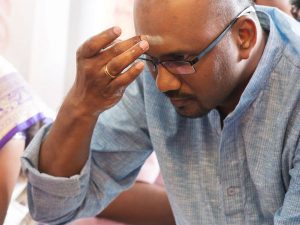 The word bhasma means “that by which our sins are destroyed and the Lord is remembered”. ”Bha” implies Bhartsana (“to destroy”) and “sma” implies smaranam (“to remember”). The application of Bhasma therefore signifies destruction of the evil and remembrance of the divine. Bhasma is called Vibhuti (“glory”) as it gives glory to one who applies it and raksha (which means a source of protection) as it protects the wearer from ill health and evil, by purifying him or her. The ash we apply indicates that we should burn false identification with body and become free of the limitations of birth and death. It also reminds us that the body is perishable and shall one day be reduced to ashes. As death can come at any moment, this awareness must increase our drive to make the best use of time. This is not to be misconstrued as a morose reminder of death, but as a powerful pointer towards the fact that time and tide wait for none.

Bhasma is specially associated with Lord Shiva, who applies it all over His body. According to Hindu mythology Vibhuti or Bhasma is said to be favorite to Lord Shiva and that’s why He is often called Vibhuti Bhushan (the one having ash as his ornament). Shiva devotees apply bhasma as a tripundra (the form of three lines). When applied with a red spot in the centre, the mark symbolises Shiva-Shakti (the unity of energy and matter that creates the entire seen and unseen universe).

Ash is what remains when all the wood is burnt away and it does not decay. Similarly, the Lord is imperishable Truth that remains when the entire creation of innumerable names and forms is dissolved.

Bhasma is believed to have medicinal value and is used in many ayurvedic medicines. It absorbs excess moisture from the body and prevents colds and headaches. The Upanishads say that the famous Mrutyunjaya mantra should be chanted whilst applying ash on the forehead, thus: 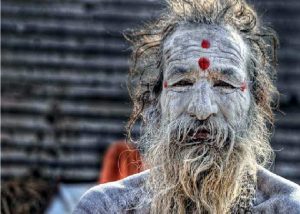 “We worship the three-eyed Lord Shiva who nourishes and spreads fragrance in our lives. May He free us from the shackles of sorrow, change and death effortlessly, like the fall of a ripe cucumber from its stem !!”

In yajna vibhuti is considered very sacred and is used as fuel to burn the offerings like ghee,milk,curd,rice,holy twigs etc.,in Lord Agni who carries the offerings to the respective devata in a yajna.The residue left over which is white in colour is considered as Vibhuti and is given to the devotees as prasaad for daily use to please Lord Shiva.

Many Vibhuti Manufacturers these days adulterate their Vibhuti product with Jersey and Friesian’s animals dung ashes, rice bran ashes, rice husk ashes, boiler waste ashes, Thermal Power plant ashes, Bio-gas energy plants, white stone powder, paper cellulose, calcium carbonate, paints, chemicals, etc… These substances make them unfit for spiritual use. Due to lack of knowledge and awareness, the above adulterants are used by the manufacturers to gain a huge profit, as they are cheaply available and are considered as waste by-products by various industries. Many people have developed skin allergies with the use of these adulterated Vibhuti. Special care needs to be taken by the Shiva devotees that Vibhuti is without adulterants and is prepared in a traditional way (from wood) to gain the benefits of smearing Vibhuti. — with Ramanand Makams and Srilan Srisukumaran.