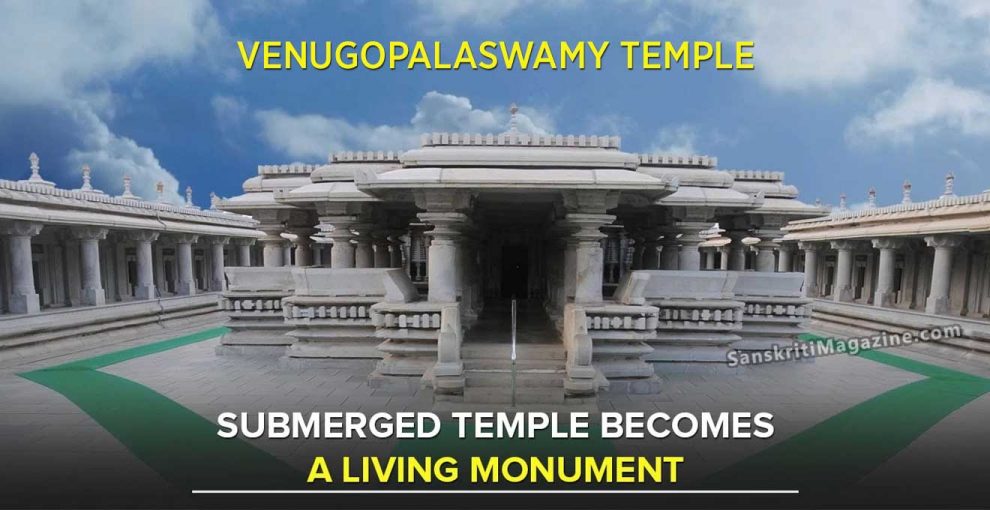 The Venugopalaswamy Temple located at Hosa Kannambadi, near Krishna Raja Sagara, is a beautiful example of Hoysala architecture in Karnataka. The temple was originally built in the 12th Century A.D., around the same time the Chennakesava Temple at Somanathapura was built.

Before the Krishna Raja Sagara dam project was conceived in 1909, the Venugopalaswamy Temple complex was located in the village of Kannambadi. The KRS Dam project was to result in displacement of all persons living in Kannambadi and the surrounding villages, all of which would be submerged. Therefore the King of Mysore, then Krishna Raja Wadiyar IV, ordered the construction of a new village for the residents of Kannambadi area, aptly naming it Hosa Kannambadi (New Kannambadi).

The original 12th Century Venugopalaswamy Temple, along with two other nearby temples — Kenneshwara (Ishwara) temple and the abode of Kalamma (a local deity) — were abandoned. By 1930, the first phase of the dam was completed and all three temples were submerged. However, whenever water levels in the reservoir dropped during drought years, the temple would resurface. This was very evident around the year 2000. 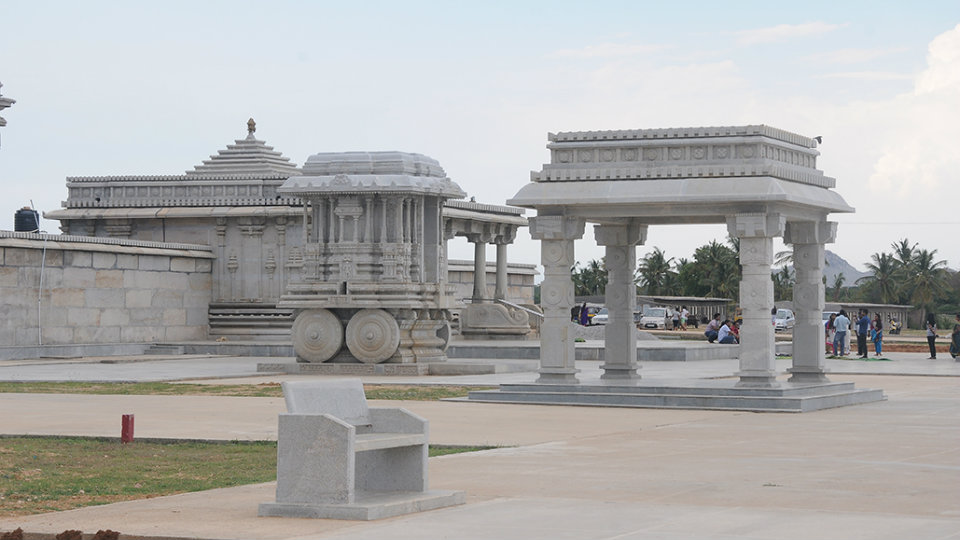 The resurfacing of these submerged temples was taken by the local residents as a sign of approaching bad luck. Although the people were happy to see the temples re-emerge, it meant that scarcity of water loomed large in an agrarian community whose life depended on that water.

By 2004, a great effort was underway to reclaim the submerged temple. A local philanthropist took up the task of relocating and restoring the temple, which had been lying underwater for more than 70 years. Under patronage of the Khoday Foundation, plans were made to relocate the temple to Madhuvana Park in Mysore. However, protests from the villagers of Hosa Kannambadi convinced the foundation to shift it to a place near the relocated village.

The original temple complex was massive, covering an area of 50 acres. Tens of thousands of photographs were taken, and all the temple’s stones marked before the dismantling operations began. Every one of the temple’s physical aspects were digitized so the re-installation process could be done precisely. Through an exacting process of replication, trained artisans and sculptors from Madurai and Thoothukudi from Tamil Nadu and Puducherry saw that each and every slab from the original temple was moved, and the temple rebuilt in its new location. The documenting and disassembling work had to be done during the drought season, and the stones were moved as quickly as possible, transported to their new location. 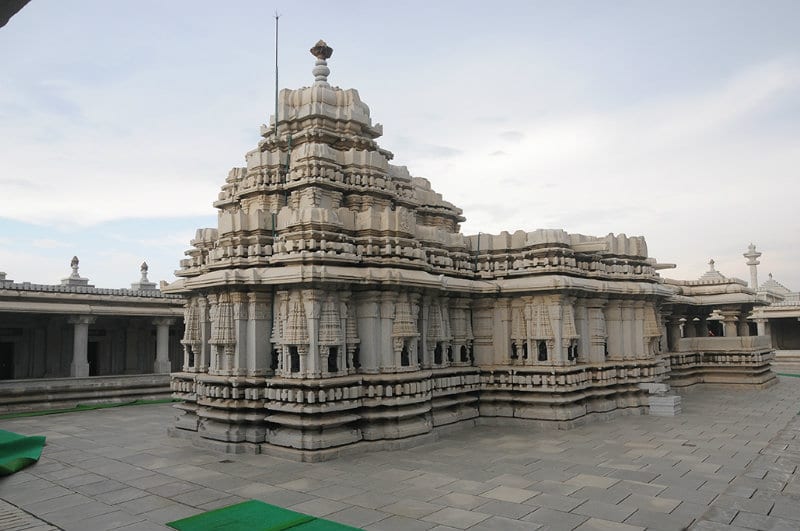 The cost of the project was estimated to be around INR 2.5 crore. Although no damage was done to the stones after seven decades of submersion, the surface of the outer temple stones was polished, giving the temple a ‘new’ look. Inside, however, you still see the unfinished original surface of the once-submerged stones.

The new site is about one km to the north of the original site. It is oriented along an east-west axis, with the main entrance of the temple facing east, towards the water. Even today, when water levels of the KRS are at their maximum capacity (124.80 feet), the backwaters just touch the outer walls of the temple at its new site, about 9 km. from the famous Brindavan Gardens.

The presiding Deity, Sri Venugopalaswamy, Lord Krishna playing on His flute as a cowherd, once again resides in the temple’s sanctum. The sanctum sanctorum is a closed chamber. In the original temple, Venugopala was installed beneath a Honne tree (the ‘Kino’ tree), but that feature apparently could not be duplicated. 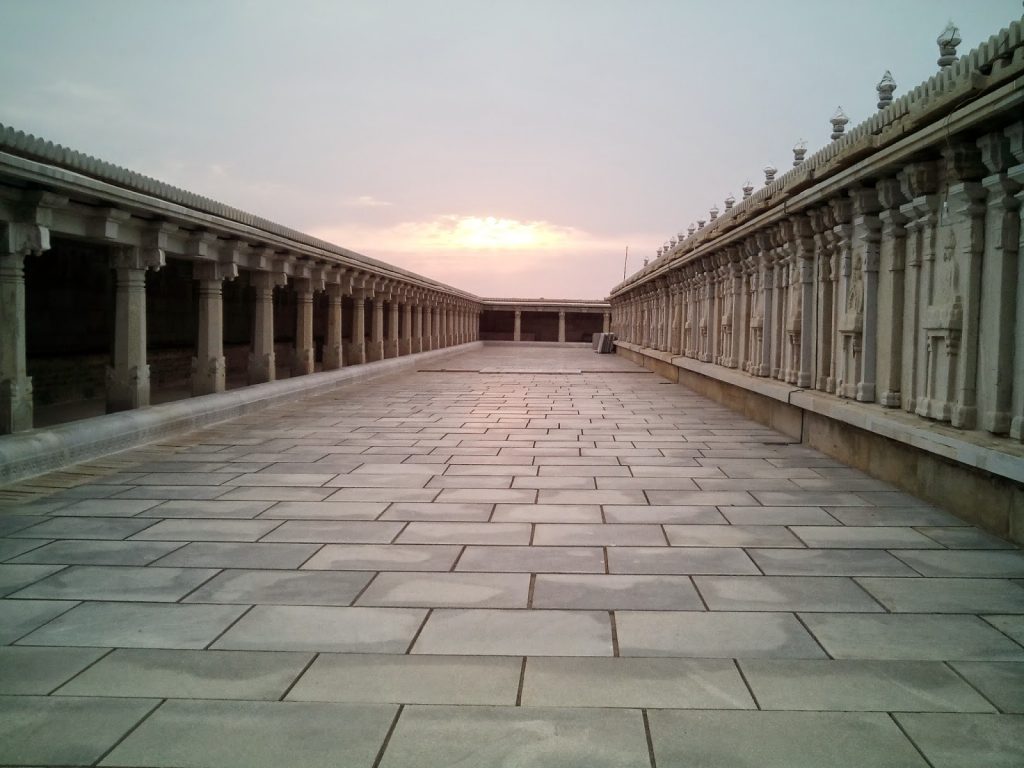 The Deities and murtis installed from the original temple reside in 46 constituent shrines – 17 each on the southern and northern sides and 12 on the western side. The temple sides are embellished with 24 murtis depicting the Dasavatara, along with images of Lord Brahma, Saraswati, Harihara, Hayagriva and Jalasayana. Jalasayana Narayana is the image of Lord Vishnu, in a reclining posture on the water.

The temple tower over the sanctorum, or sikhara, is one of the exceptional architectural features of the Venugopalaswamy Temple. The fluted design was executed by placing finely carved blocks, one over the other, without the use of mortar. This refined building style makes it difficult to spot the joints, giving the appearance that the entire sikhara was executed in a single block.

The temple features a garbhagriha (sanctum sanctorum), a vestibule, a middle hall and a mukhya mandapa (main hall). The cell opposite to the entrance has a figure of Kesava (Lord Krishna), while the south cell containing Gopalakrishna was a later addition.

The Hoysala complex is a symmetrical building enclosed by two prakaras and the outer gate (mahadwara), with verandahs on both sides, flanked by the yagasala and kitchen. This is enclosed by the second mahadwara which led to the inner enclosure, much like the Somanathapura temple.