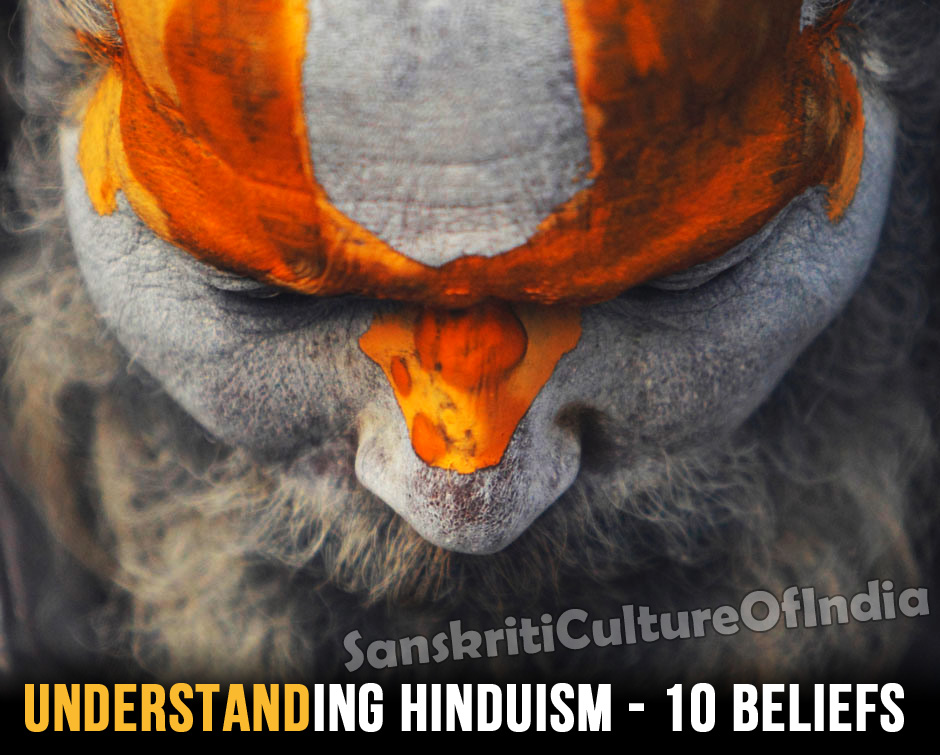 The basic beliefs of a religion are those that form the thoughts, feelings, actions and the entire attitude of its followers towards the world around them and their fellow men.

1. All followers of orthodox Hinduism believe in a sole God, a single reality that is simultaneously transcendent and immanent, as much Creator as creation. The different manifestations such as Siva, Lord Rama, Krishna etc., are not more than different aspects of one single reality, a single omnipotent God, omniscient, and omnipresent. A mystery which is possible to know only and solely through direct communion.

2. All followers of Hinduism believe in the divinity and infallibility of its sacred revealed scriptures, the four Vedas,the Rig Veda, Sama Veda, Atharva Veda and Yajur Veda, as well as of all the Vedic literature, which forms the very base of the transcendental building of the universal religion of Sanatana-dharma.

3. All followers of Hinduism believe that the universe follows an infinite cyclic process of creation, preservation and dissolution, just as it is affirmed in the holy Bhagavad-gita (8.18):

“When a new day of Brahma begins, all becomes manifested from the unmanifest, and after nightfall all comes back and melts into the unmanifest.”

4. All followers of Hinduism believe in the law of karma or the law of cause and effect, according to which, every individual is completely responsible for his future. Everyone creates his own destiny, through his actions on the mental level in the form of his thoughts, on the verbal level by his words, and on the gross physical level by his bodily actions.

5. All followers of Hinduism believe in reincarnation. That is, they believe that the soul goes through an educative process of transmigration of repeated births and deaths, replacing its old bodies for new ones. They also believe that final liberation or moksha awaits every soul in the end, as it is expressed in the holy Bhagavad-gita (2.13):

“Just as the embodied soul passes in the present body from childhood to youth, and later to old age, it passes to another body at the moment of death. A reasonable person is not confused by such changes.”

6. All followers of Hinduism believe in a great number of very exalted and powerful entities, which are invisible to the material senses, called Devas or Gods. They also firmly believe that different rituals, such as worship in the temple and the different sacraments, produce a profound communion between humanity and these Devas.

7. Hinduism believes that a guru or a bona fide spiritual master is indispensable for any follower of Hinduism, and that without accepting the refuge of a spiritual master it is impossible to advance spiritually. This is confirmed in the holy Bhagavad-gita (4.34):

“Make efforts to understand the Truth by approaching an authentic spiritual master, asking questions from him submissively and serving him. The self-realized being can give you wisdom because he has seen the Truth.”

8. All followers of Hinduism believe that life, in all its different manifestations, is sacred, and therefore is worthy of being respected, loved and worshipped. For this reason, they do not accept the killing of animals or the consumption of their meat, nor do they accept the harming of any living being in action,word or thought.

9. All followers of Hinduism do not accept only one unique religion as the owner and master of God, or the Truth. On the contrary, they understand that we all exist on different levels of evolution and distinct levels of development in our path towards the realization of the Absolute Truth. Therefore, Hinduism as a religion accepts, tolerates and respects with comprehension every belief, faith or religion and expects the same or a similar attitude from other religions towards itself.

The Rig Veda expresses our attitude towards other religions by saying: “Aa no bhadrah kratavo yantu vishwatah”.. Which means, “Allow any noble idea to come to us from whatever direction”… This phrase contains the true attitude of Sanatana-dharma and of the truly religious man.

10. Every follower of Hinduism respects equally all saints and prophets from every religion with open mind and without any discrimination even though that is not the case with many others towards Hinduism.