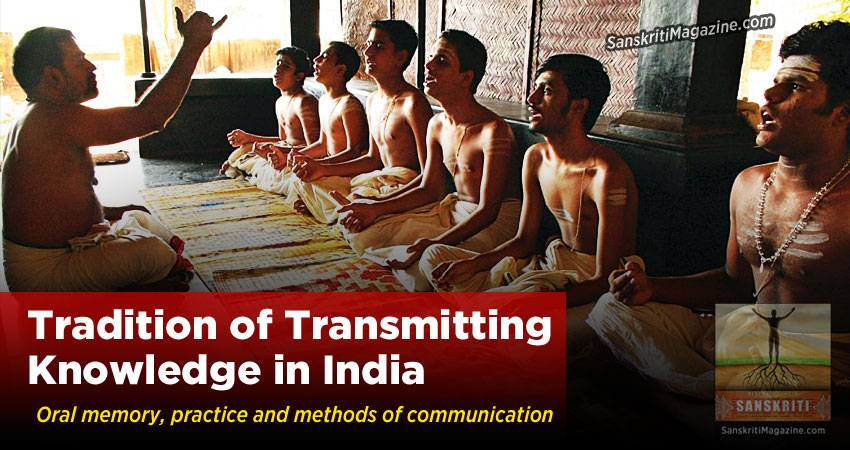 In India, oral transmission of knowledge still continues to be the most important method by which we communicate messages, educate our children on early lessons, learn our scriptures and texts, transmit our stories and nurture knowledge about life and art. All cultures have found ingenious ways to pass on their knowledge systems, through developing formal and informal ways of communication and preservation. Most pre-written cultures had developed systems of transmission of their knowledge such as Homer’s poetry, or the Christian gospel spreading by word of mouth through the apostles of Christ down to the early Christian era.

The oral tradition of West Africa was to propagate their stories, and epics by establishing a class of people who took on the task of memorizing and handing down that knowledge to succeeding generations. The markers of this memory consisted of symbols, codes and images that represented different facets of knowledge. Many societies across the world developed elaborate mnemonic devices and formal rituals which became part of remembering and recollecting knowledge in domains such as tales, parables, proverbs, songs and legends, skills pertaining to arts, healing and medicine.

When we examine some significant ways in which India preserved and transmitted its knowledge, we see that India’s oral tradition has followed both fixed and floating patterns of transmission, in codified and un-codified forms. While the knowledge contained in the Vedas and its ancillary branches came to be transmitted through an established, meticulous code of memorization, a parallel dimension of non-structured, free transmission also existed side by side. Often these two traditions are seen to interact, respond and support each other, because they emerge from the large stock of the shared wealth of a collective imagination.

While the codified system of handing down Vedic corpus became dependent on an organized system of learning through the guru-shishya parampara, the narrative-performative tradition of recitation carried on the dissemination of much of our indigenous knowledge. Much of India’s myths and epics such as the Mahabharata and the Ramayana, tales and fables such as Kathasaritsagara and Jataka stories, ballads, legends, songs, and a multitude of knowledge and skill in every field were carried on through a largely flexible mode of communication, which extends the narrative through interpolations, conscious extensions and embedding sub-narratives. Even if there was an early written tradition, it was believed that “pustakeshu cha yaa vidya/parahastagatam dhanam/samaye tu paripraapte/na saa vidyaa na taddhanam” (the knowledge from books and money gone to another person are not useful, because they cannot come to one’s aid when needed”).

The mode of oral narration of stories goes back a long way in India. We find that many later texts, which later came to be fixed through the written form, existed as floating stories and versions in specific local milieus. These stories have considerable freedom of interpretation depending on the skill and creative imagination of the narrator, and are open-ended and collaborative, rather than fixed and inflexible. Even when the basic story remains the same, the interpretation changes according to who says it, where it is said and how it is said.

In India, there were professional storytellers attached to the temples who narrated stories from the Ramayana and the Mahabharata.

A class of itinerant story-tellers told and retold the epics, puranas legends not merely in the temples but in public spaces across the country. Different texts and traditions emerged with local variations and stories and sub-stories began to be integrated into the main plot. With the interpretative skills of the storytellers, even complex ideas in the Ramayana and the Mahabharata became accessible to a wider audience. Apart from embellishing the same story through subnarratives, another device of storytelling that became popular in India was the stringing of several stories into the same narrative structure; tales and fables such as Kathasaritsagara, Panchatantra and Brhadkatha provided a single frame in which multiple stories were embedded.

A powerful instance of narration of the oral tradition of story-telling is Prabandha Koothu from Kerala, which is dovetailed into Kutiyattam, the Sanskrit theatre. The comic character Vidushaka, the protagonist verbally elaborates different episodes and stories from the epics in Malayalam, a language that was accessible to all levels of people. While narrating the story, the actor spins new stories and anecdotes into the main plot, with copious references to contemporary situations, and the actor directs his attention through ridicule to the members of the audience also. Couched in the guise of relating to the texts, the actor through the medium of humour makes references to topical incidents, and the immediacy of the situation becomes highly entertaining to the audience. The introduction of the ‘Prabandhas’ written by eminent poets like Melpattur Narayana Bhattathiri also enlarged his repertoire. However, irrespective of the nucleus of the text, the oral content becomes the real text in Prabandha Koothu.

Performative elements such as singing and dancing are also popular devices to reach out to audiences. Folk and regional performances like Ramlila, Pandvani and a host of other performances across India also popularized these stories and excited the imagination of the people. Ramlila, the story of the divine play of Rama, has diverse representations across India and is generally based on the text of Tulsidas’s Ramacharitmanas.

In the celebrated Ramlila of Ramnagar, the whole village is transformed into a performance arena and becomes the venue where the divine lila is played out year after year during the festive season of Dussera. There are also several other versions of Ramlila from Chitrakoot, Agra and Delhi, which have carved their own niche in narrating the Rama story, as well as hundreds of neighborhood Ramlilas that happen in villages across north India. The fact that there is a Ramlila ground in almost every village, town and city in India testifi es to the popularity of the performance of Ramlila in the country.

In contrast, the preservation of large portions of the Vedic corpus went on for centuries through a complex, highly codifi ed method of transmission. Elaborate, highly sophisticated and foolproof mnemonic methods were used to instruct and memorize these compositions, which eliminated or decreased the danger of losing words, syllables or accent. The extraordinary effort of memorization emphasized correct pronunciation (akshara suddhi), correct duration of utterance (matra suddhi), and correct intonation of accents (svara suddhi).

This oral tradition was kept incredibly fail-safe because it needed the intact safeguarding of a vast magnitude of verses. There were different recitational devices that helped to remember these texts. The basic step was padapatha, direct recitation of the Vedas splitting them wordby- word, combining with hand postures (mudra-s) to signify appropriate sound patterns, slowly graduating to the next level called krama where the first word of the mantra is added to the second, the second to the third and so on, until the whole verse is completed.

This method enabled the student to know the individual words, and also combine words in recitation

and the changes that occur in the sound that occur in the word as a result of the combination. While pada and krama are in the natural order of recitation, there are also indirect methods called vikrti which follow eight increasingly complex patterns of memorization such as jata, mala, sikha, rekha, dhvaja, danda, ratha and ghana. This elaborate system was developed with the purpose of preserving the purity of sound, word, pronunciation, intonation, pitch and sound combinations of the verses of the Veda and to facilitate the absorption of massive amounts of data as oral memory.

For preserving the chanting tradition in its utmost purity, texts called shiksha and pratishakhya explain the science teaching the method of pronunciation of vowels, alphabets. The siksha texts explicate the correct pronunciation of vowels (sound), while the pratishakhya texts focus on uniformity in utterance. The well-devised system of teachinglearning Vedic transmission also had a functional (prayoga) aspect, which refers to its use in ritual. Vedic priests recited passages from the text which had diverse applications in rituals, rites, and sacrifices.

Accounts from early times including visiting travelers in ancient India like I-Tsing have given evidence to this system of oral memorization of texts. In the late nineteenth century George Buhler observed that a good Vedic oral practitioner of oral recitation knew massive amounts of textual material as memory and recall.

One of the most important critiques of the rote learning system in today’s educational theory is that it does not lead to the understanding of a subject or the acquisition of knowledge, but only to memorization, which is a mechanical process of repetition and retention rather than analysis. What then are the merits of this system practiced in India since time immemorial that has now caught the attention of the world as a model worth emulation?

The differential abilities of oral memory and writing are spelt out in the words of I-Tsing:

“Firstly, by repeatedly committing to memory, the intellect is developed; secondly, the alphabet fixes one’s ideas. By this way, after a practice often days or a month, a student feels his thoughts rise like a fountain, and can commit to memory whatever he has once heard. This is far from being a myth, for I myself have met such men.”

For the preservation and transmission of oral systems of transmission, audio/video techniques of documentation are useful. However, to prevent this multi-faceted knowledge from being erased from memory, we must revitalize the system from within. One way is to bring diverse aspects of our indigenous knowledge to “mainstream” academics, which since the colonial times has been marginalized as mere relics of the past. Linking indigenous knowledge effectively with education is the key to revitalize this knowledge.

Vidura Neethi from the Mahabharata
Dasarajna: Battle of the Ten Kings from Rig Veda
Comment