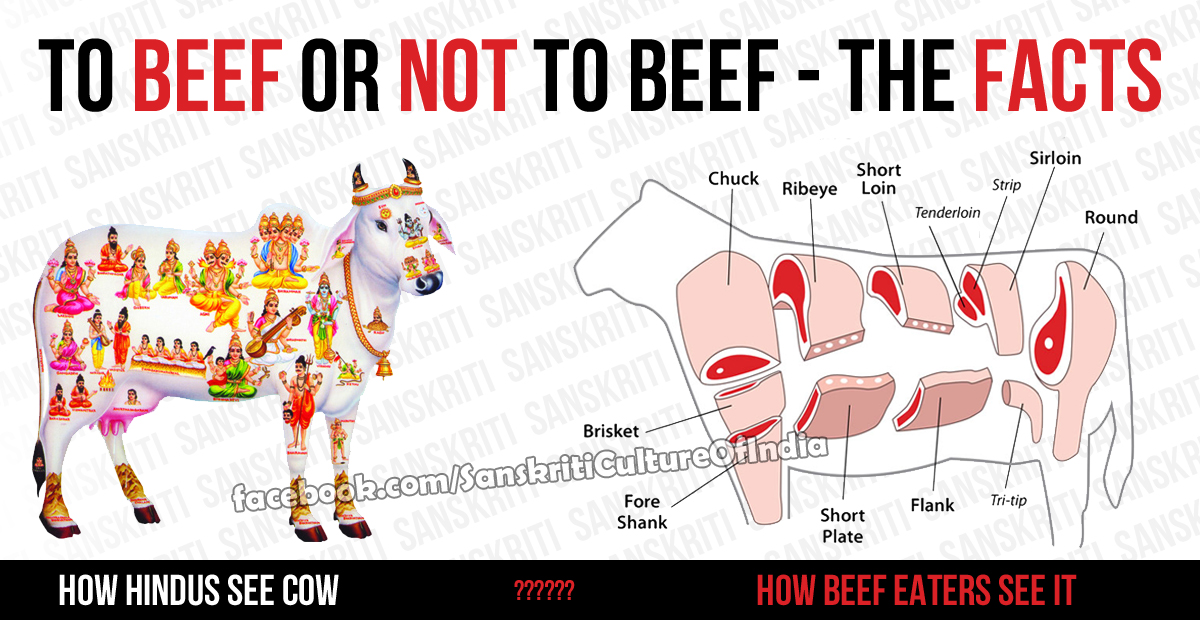 After the post about meat consumption by Hindus, we received quite a few messages about eating Beef in particular.  I understand that it has become a new trend to eat beef in South and North East India and other areas where Christian conversion is at full force, but I don’t understand how one can please a “GOD” by eating something that is or could be sacred to fellow humans/citizens/community! But then, if one can leave his/her faith then this should not be surprising at all. Nonetheless it is a very SAD situation.

Please do read the complete post and you will see how the facts were manipulated and misinterpreted by those with an agenda of their own!

A lot of Hindus are following rituals just because their ancestors have been a part of it. The problem comes when someone asks you about your beliefs and why you have those beliefs…. at that moment…we are not able to come up with a suitable answer. Here are some facts, which will shed light upon our confusions.

Why should a Hindu not eat beef?

Of course, Hindus see 33 koti of Gods in it. For that matter, they see God in all entities of the world. Weren’t it we who said, “Eeshavasya midam sarvam…”? )

To go to the details of it we may have to go into the Vedic Vishwa. Basically vedas refer “Gou” as animal and as well as “Indriya” (senses). The word “Gou” over the period of time became “Cow” in English (Apabhransh).

The real meaning of each of these word Vedic people knew. Over the period they (words) lost meaning and people considered:

The wrong interpretations of these words resulted in heavy sacrifices of Gou and Aja (Bakara). Gou was and is social animal with lots of benefits. People knew it and so to stop unnecessary killings of animal like Gou it was made forbidden in Kali Yuga.

That is how people in Kali Yuga stopped Gou Medh and Hindus who follow Vedic principle do not eat beef (Gou).

Gou Medh:
Actually in Vedic period Gou means Indriya (senses) most of the times. How otherwise you justify a word Gou Swami? Does that mean Nandi ya Bail? Definitely not. We mean a Rishi or a saintly person who has conquered his senses. So when Gou means Indriaya Vedic people used to perform Gou Medh that is Indriya Medh that is Indria Nighriya. They used to direct Indriya rather than guided by them. Over the period this became difficult to implement and people considered it to be cow or beef.

AshwaMedh:
It also had similar problems. Ashwa is A+Shwa ‘A’ means absence and ‘Shwa’ means breathing. So where ‘Absence of Breathing’ is achieved and only Shusmuna nadi works that state is called as Ashwa. So we have to kill that state (avastha). Interestingly, only Kshatriyas were allowed to perform Ashwa Medh. Brahmans were not allowed. Brahman means Ashwa avastha. A Kshatriya is not supposed to go to Ashwa avastha because he must look after his subjects. That is why Ashwa Medh was performed by Prabhu Ram Chandra and Yudhistir. It is difficult to understand that Prabhu Ram Chandra can kill a innocent horse for his peace of mind (Manaha Shanti). It was to remember that being Kshtriya they have to have Shawas (Nitya Karma). This was also misinterpreted in the post Vedic period and people started killings horse.

Over the period people took altogether different and wrong interpretations and hence question like Beef eating comes up. So when entire world was practicing Vedic sanskruti (culture) some of them took

Some of them took it as Gou Swami, Gou Wardhan, GouPal (Hindu)

Some of them took as Strong Indria Nirodh (Jain).

It is there that animal sacrifices were not allowed but in the Vedic literature it is not mentioned that Mansahar (Non-Veg) is not allowed. There was actually no problem with the animal eating till Ramayana and Mahabharata. There are several instances of Ram either eating or stop eating Mansahar. It may sound contradictory to what we said above but let us explain.

We all know Four Varnas. It was a best example of Mankind Classification. A person would be classified as to be belonging to one of the Verna based on the attributes (Guna) and not the family.

Kshatriya is Kshatrap ya Warman. This means that anyone who is maintaining his physical strength to reduce mind detractors. Naturally, that person has to indulge in worldly activities. He has to reduce (Warman) chanchal vrutii so it is obvious for eating habits as well. There is no good reason to believe that it was prohibited in the Vedic society to have Mansahar.

Now the last question:
How can you say then Hindu values can be universally applied.

What are Hindu values? What we call Hindu is Vedic person;
Who believes in Vedas (or their derivations) is today called as Hindu courtesy Muslims.
What is Vedic Sanskruti? Ved means Gyan or Knowledge and Vedic means Gyani. So Vedic Sanskruti is culture of Gyanis. There is no concept of religion in Vedic time. So Shashtra and Vigyan are two pillars of Vedic Vishwa (world).

These are four stages of the student of Vedic society depending attributes (Guna) one has. Ultimate state and hence desirable is the Brahman state the meaning of which we see earlier. So making entire world Brahman is the basic principle of Vedas. This is what is the Vedic values that is Hindu Values.

Don’t you read Universality in it? No other Dharma rests on such a great principle. We Hindus are supposed to make entire world Brahma- Maya. So be very clear about our roots and present true picture of Vedic (Hindu) society and teachings. Remember you should to tell what Anand (bliss) we get in Brahma!!