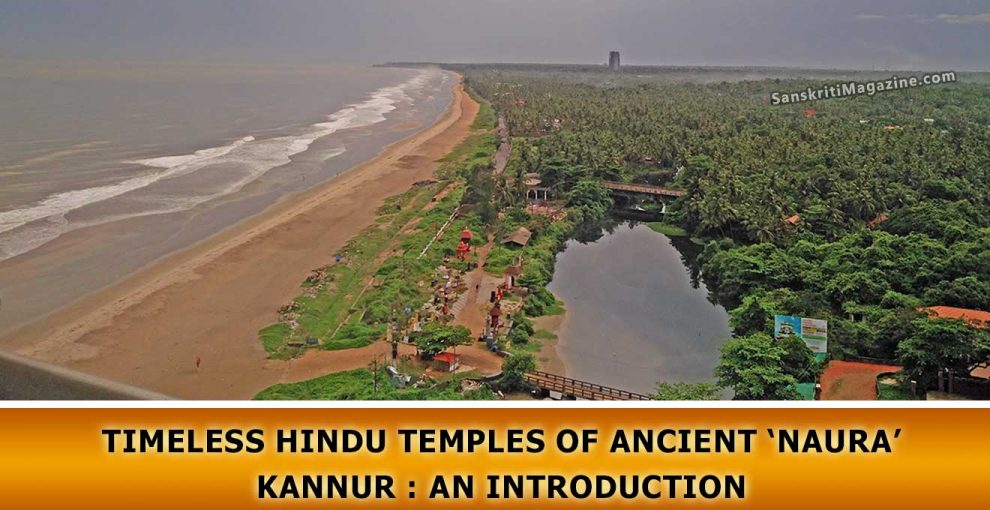 I have set out to cartograph the footsteps of my ancestors in the southern peninsula of India in a verdant stretch of fertile land known as Malabar through a series of articles tracing the Art, Culture, Temple Heritage and History of this blessed land. At the foothills of Sahayadri Range by the Arabian Sea is this small bit – land of my ancestors once known as ancient ‘Naura’ today’s Kannur or anglicized  Cannanore.  Kannur the land of lore’s and looms is also called the ‘Crown’ Of God’s Own Country i.e., Kerala.

This small swathe of land is juxtaposed between high peaks of the Western Ghats on the eastern edge (Coorg district of Karnataka). Emerald green hills densely covered with sky piercing palms and teeming with several hundred species of flora and fauna with undulating paddy fields of every shade of green imaginable making its mid-lands. This region continues to be one of Earths most densely bio-diverse regions on Earth. The land is interspersed with hundreds of large and small meandering rivers and backwaters gently rolling into swathes of pristine golden beaches lashed by turquoise and teal Sea.

This verdant land which legend states was carved from a recalcitrant sea by the wrathful axe of furious sage Parashurama the sixth avatar of Bhagwaan MahaVishnu. And what best way to honor this land and the memory of our ancestors than to share with you the legends and stories of the hundreds of Temples and Kavu’s and Theyyam Festivals liberally sprinkled through every few hundred meters of this vibrant land.

Our ancestors as ordinary citizens under the rule of various Hindu chieftains and Kings of yore labored here enshrining their love for this land to perpetuity by building hundreds of dykes, ponds, tanks lakes, forts, palaces, temples, shrines open to nature, snake worshiping sites, Kaavu’s etc. They established many community centered religious ceremonies and festivals linked to various celestial and earthly events which acted as an incentive to draw people to gather as a community in the precincts of the Temples to celebrate the occasions. The most popular mode of celebration was the very colorful scarlet and crimson adorned ‘Theyyam’ festival celebrated for several continuous days and nights, a ritualistic dance drama enactment of tales associated with Man-God interactions teaching moral values with the synchronized beat of cymbals and drums beneath golden light provided by burning long dry palm leaves as torches.

The land is liberally sprinkled with these Hindu worship centers, virtually every few hundred meters and I thought I would start a series covering the ones I have visited over the years starting with the ones I visited recently and followed by walking down my memory lane. 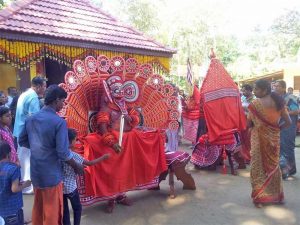 Some of the prominent ones are Sree Parashani Muthappan Kshetram by the banks of Vallapatnam River approx. 16 Kms from Kannur Town. A folk deity considered to be the deity of the land and ‘Kuladeva’ for many of the locals there are many mesmerizing stories associated with this benevolent deity, some tales associate Sree Muthappan as avatars of Vedic Vishnu and Shiva Bhagwaan. The highlight of this temple is that it follows its own localized form of worship and not the traditional bramhanical worship. The deity is personalized through an elaborate dance drama on the temple premises interacting closely with the assembled devotees, adorned in vibrant crimson head gear and rotund scarlet gowns made of natural materials.

Another unique feature is that the ever faithful dogs are allowed inside the temple as It is believed the deity was accompanied by dogs during his forays into the thick forests of Kannur. The deity also accepts offerings of alcohol mostly toddy from local palms and roasted fish.  During the month of December the festivities at this temple are shifted to a far off holy location of Kunnathurpadi in the Uddambu mountain range considered as the ‘Aarudam’ or birth place of Sree Muthappan. The site has no permanent structure only a temporary structure with a thatched roof of palm leaves where festivals are held each day and night for the month with various forms of ‘Kolams’ or ‘Theyyams’ depicting the life of Sree Muthappan  ( a detailed write up will follow in later series).

There are several numerous and prominent temples built with large fort like structures surrounding the main temple complex. Some of the prominent ones with ancient origins are the Kadalayil Shri Krishna Kshetram – Could this be the Krishna from whom the land borrows its name ‘Kannan’- Krishna’s ‘Ur’ – land? Other prominent ones like Kalarivaddikkal Bhagwati (Badrakali) Kshetram, which is closely associated with the ‘Kalari Pyetu’ or combative form of Martial Arts training also thought to be the ‘Mother of All Martial Arts’ as it is believed that the modern forms of Karate and Kung-Fu evolved when this traditional form travelled the sea and spice routes to the shores of 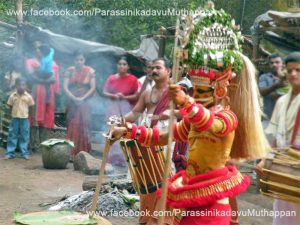 On the outskirts of Kannur nearly 80 kms away nestled on the shoulders of the Western Ghats is the village of Kottiyoor the sacred site of ancient pilgrimage performed annually by thousands of devotees especially during the month of June. This is thought to be the sacred site of Daksha Yaga, Devi Sati’s sacrifice and the resulting MahaShiva Thandava which nearly led to the destruction of the universe.  Temple of Kottiyoor split into two sites – one that is called ‘Ekkara’ or ‘this side’ Kottiyoor with a temple structure enshrining Shiva built into the hills open 11 months a year and ‘Akkara’ or the other side of Vavali river Kottiyoor which is actually a hollowed stretch of land with temporary structures built during the festival season of June. People circumbulate in knee deep waters thought to embody Devi Sati’s blood around two large rock projections one considered to embody Devi Mata and the other larger one considered to embody Mahadeva with a swayambhu linga that is worshipped here. 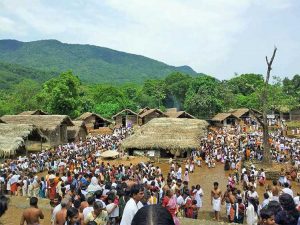 Kannur also houses the famous palaces or ‘Kovilakam’ of the Kolathiris or Chirrakal Rajas. The southern branch of this family is known as the Travancore Royal Family. The Kolathiris trace their linage to ‘Mooshiks’ Kings who  ruled in the 1st Century AD and traces of their origins is mentioned in the sanskrit texts of  ‘Mooshika Vamsham’ written in 10th Century AD by ‘Athulan’.  Around the palaces in Chirrakkal (now one of them is converted into a public museum) are several large and small Temples and Man-made Tanks. One of the highlights is the Chirrakkal ‘Chira’ or Man Made Tank constructed over 14 acres and thought to be the largest in India. It underwent a major de-stilling exercise last year and is under proposal to conserve it for drinking water and tourism related activities.

With such abundance of history and culture, and with so many folklores steeped in mysticism, I thought of sharing the romance of its past with the readers through a series starting with this one as an introduction. I am not averse to borrowing from memories of my relatives and friends as I would not be naïve to imagine that I would be able to cover all the spectacular legends and ancient sites through my visits. Perhaps having read these tales someday the reader might want to walk the same fertile red Malabar earth.

History of Gods and Goddesses of Ancient India: The Harappan Pashupati
Flowers of Eternity: Prayers of a Divided Mind
Comment