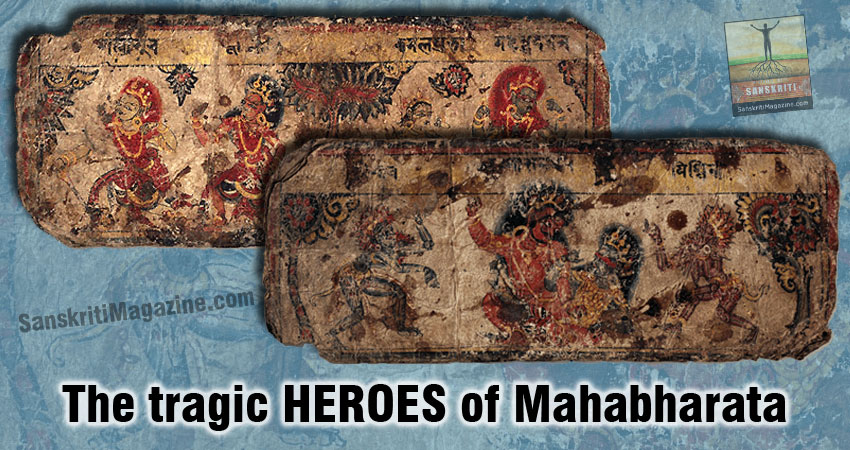 Dronacharya (the great scholar and teacher Drona) lived during the time of Mahabharata. Due to his dire and impoverished condition, he ended up working exclusively for the kingdom of Hastinapur and had to assume full responsibility for Kaurava and Pandava princes.

Before seeking shelter under the king of Hastinapur, Drona used to live elsewhere with his wife and infant son Ashvathama. In spite of being a brilliant and scholarly brahmin and extremely competent martial arts teacher, he could not find work and was unable to earn a living. The situation for him and his family was so bad that one day his wife is known to have told him “you claim to be very brilliant, brave and great, yet you are extremely poor and not even able to arrange a glass of milk for your infant son.”

Drona, already frustrated by his poverty, felt totally humiliated when his wife taunted him like this. He immediately set out to try his luck elsewhere. He told his wife before leaving that he would return only after becoming a rich man.

Drona went to many places looking for work but was not successful. Finally he ended up in Hastinapur where he found a well-paying job in teaching martial arts to young princes (Pandavas and Kauravas). After having assumed the sole responsibility of teaching martial arts to princes of Hastinapur and looking after their well-being, Dronacharya would no more be able to accept others (outsiders and ordinary people, including Karna and Eklavyaa) as his students and he would make sure that no one from outside posed any competition or threat to his royal wards, then or in future. This of course led to the sad situation in which Eklavyaa had to give up and sacrifice his archery thumb because he, on his own (without Drona’s permission or knowledge), had decided to use Dronacharya as his mentor and source of inspiration in the martial arts.

Needless to say, Eklavyaa’s losing his thumb had nothing to do with his caste which was supposedly “low”. In reality it was a simple case of Dronacharya trying to protect the future military interests of his royal benefactors, from Eklavyaa perhaps. Anyone who thinks that Eklavyaa was victimized due to his caste is totally misguided. Strategically speaking, it was like these days when some people and nations possessing nuclear weapons or sophisticated military technology and knowhow don’t want others to have the same things and they even try, sometimes using preemptive military strikes and covert actions, to stop others from acquiring them.

In this game of military strategy, Eklavyaa was both unlucky and lucky because he lost only his thumb and not his head. By having his archery thumb removed, even though Eklavyaa had become militarily unfit yet his life was spared. This shows Eklavyaa was not punished for his low-caste status etc. If Dronacharya had really been offended by Eklavyaa’s indiscretion or caste, he would have easily taken the life of Eklavyaa instead of just removing his archery thumb. It should be noted that Dronacharya, being a reputed military personality, was quite capable of killing, which he did to many people (kshatriyas and non-kshatriyas) in numerous battles in his life. Moreover, through his masterfully executed military plan Chakravyuhu in the Mahabharata battle at Kurukshetra, Dronacharya even caused the death of brilliant and brave prince Abhimanyu (Arjuna’s favorite son) when he (Abhimanyu) appeared to be a threat to Hastinapur.

Drona’s concern in trying to protect and save Hastinapur, his benefactor, in any possible manner (including having Eklavyaa’s thumb removed) seems to be based on his self-interest and not from other considerations (e.g. his relationship, friendship or liking for Arjuna). Thus he not only had Eklavyaa lose his thumb, but he also is known to have fought Arjuna in several battles, before and during the battle of Kururukshetra in which he himself died at the hands of Arjuna. This clearly shows that Dronacharya did not have Eklavyaa lose his thumb so that Eklavyaa would not pose a threat or competition to Arjuna against whom Drona himself fought many times and even tried to kill him, albeit unsuccessfully. Needless to say, the real reason for Dronacharya to have Eklavyaa lose his archery thumb and thus become unable to fight in future was to make sure that Eklavyaa would never, all his life, be in position to pose any threat to Hastinapur.

In any case, it seems Dronacharya never forgot the kindness and patronage given to him by the royals of Hastinapur. For this he remained loyal to them all his life, fighting for them and dying in the end. Dronacharya honoring his obligation and commitment to Hastinapur and Kauravas through thick and thin, even after realizing that he had chosen to be on the wrong side (Kauravas), was like that of Bhishma and Karna. Bhishma, to make the marriage between Shantanu and Satyavati possible, had taken the vow to serve and support Hastinapur which he did all his life, eventually dying in the Mahabharata battle. The great warrior Karna, who earlier could not find any support from anybody except Duryodhana (the Kaurava prince), did the same and was killed defending Duryodhna in the Mahabharata battle.

The smartest and best military guy in the American Civil War, without whom as a general the Civil War probably would have been over in a very short time, was asked once about his choice to fight on the side of South (Confederacy). General Robert E. Lee is known to have replied “what choice do I have – I am a Virginian by birth.”

Women as the Representatives of God
Airavata: The King of Elephants
Comment