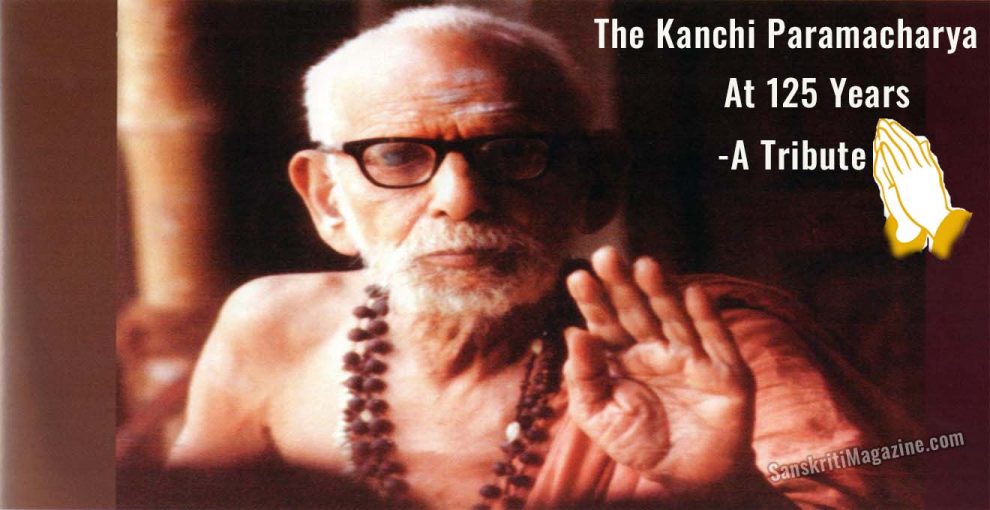 The Paramacharya was a “Walking University” both in the literal and literary sense of the word – his knowledge of the Shastras, Vedas, Vedanta etc. was unparalleled. He led an austere and spartan life dedicated to the protection and furtherance of the Dharma and the teachings of Adi Sankara Bhagavadpada.

Today (May 29, 2018) will mark the 125th birth anniversary of the Kanchi Paramacharya Shri Chandrashekarendra Sarawathi, a colossus who strode across the Dharmic firmament of the country, someone rooted in the cultural and dharmic soil of the country and drawing from that eternal fountainhead and expressing it in every aspect of his life. He was a Rishi moulded in the image of the ancient sages of Bharat, who lived in our times.

87 years – that is how long the Parmacharya, Shri Chandrashekarendra Saraswati served as the Peethadipathi of the Kanchi Kamakoti Peetham – served is indeed the right word for not even a fibre in his body could think of anything other than service – this despite the fact that if he so wished, the world could have been at his feet.

From student to Jagadguru – an overnight transformation

In 1907, Swaminathan was a 13 year old boy studying at the Christian Mission School at Tindivanam, when news came that the 66th Peethadhipathi of the Kanchi Kamakoti Peetham had attained Siddhi at Kalavai, a village about 22 km from Arcot and 43 km from Kanchipuram. News also filtered in that a maternal cousin, the only son of a widowed and destitute sister of Swaminathan’s mother had been chosen to be the next Jagadguru.

The Paramacharya would recall much, much later in a special interview for the Bhavan’s Journal titled “What Life has taught me” how through a coming together of several events both tragic and perhaps even divine, it so happened that he came to be anointed as the 68th Peethadhipathi in a sudden and tumultuous series of cascading events that would change the course of his life, the Mutt, and the country.

[Note: What follows is a slightly paraphrased version of the conversation/interview]:

“My mother with myself and other children started for Kalavai to console my mother’s sister on her son assuming the Sannyasa Ashrama (he was the only son and she was a widow). We traveled by rail to Kanchipuram, and halted at the Sankaracharya Mutt there. I had my ablutions at the Kumara Koshta Tiratha.

A carriage of the Mutt had come there from Kalavai with persons to buy articles for the Maha Pooja on the 10th day after the passing away of the late Acharya Paramaguru (The 66thPeethadipathi, Chandrasekhara VI). One of them, a hereditary maistri (helper/carriage-driver) of the Mutt, asked me to accompany him (alone). A separate cart was engaged for the rest of my family to follow me.

During our journey, the Maistri hinted to me that I might not return home and that the rest of my life might have to be spent in the Mutt itself. At first I thought that my elder cousin having become the Head of the Mutt, might have wished that I live with him. However, I was then only 13 years old and so I wondered as to what use I might be to him in the institution.

But the Maistri gradually began to clarify as miles rolled on, that the new Acharya, my cousin in the Poorvashrama, had suffered from severe brain fever and delirium and had passed away (just 7 days after being anointed as the Jagadguru). Therefore, I was being separated from the family to be quickly taken to Kalavai to assume the role of the Jagadguru. I was stunned by this unexpected turn of events. I lay in a kneeling posture in the cart itself shocked as I was, repeating Rama Rama, the only spiritual prayer I knew, during the rest of the journey…”

It was in Kalavai that the training and education of Swaminathan took place under the watchful eyes of Adayapalam Pasupati Iyer in particular who helped mould and shape the young boy into the Jagadguru who would one day become Shri Chandrashkarendra Saraswathi Swamigal and Maha-Periayava for millions of devotees.

It was “Maha-Periyava” or just “Periyava” that became popular and still remains the most common way in which people refer to Shri Chadrashkarendra Saraswathi. It is a name that at once conveys endearment, respect, reverence, and devotion. It also reflects what he really was and remains – a “Periyava”, a colossus who strode across the Dharmic firmament of our country for over 8 decades.

The Paramacharya led an austere and spartan life dedicated to the protection and furtherance of the Dharma and the teachings of Adi Sankara Bhagavadpada. What he consumed as food did not subscribe to any of the rules of nutrition or minimum calorific requirements. Often, all he had was a handful of puffed-rice twice a day – this however did not dim his physical energy or his spirit or for that matter his phenomenal mental, physical, and spiritual powers.

He did not swerve even a hairsbreadth away from the teachings of Adi Sankara, the Vedas, and the Shastras i.e. the tenets of Sanatana Dharma.  He maintained that as the Peethadhipathi it was not for him to try and make changes or modifications to the Dharmashastras, his mandate was only restricted to explaining/interpreting them and following them – he would be the example, the exemplar who would show how it was possible to live per the tenets of the Dharma and the Shastras.

The Paramacharya was a “Walking University” both in the literal and literary sense of the word – his knowledge of the Shastras, Vedas, Vedanta etc. was unparalleled, so also was his ability to walk, earning him the sobriquet “The great Paadayatri”. He is perhaps the only recent Acharya ever to have walked the length and breadth of the country twice, visiting temples and places of historical and cultural importance across India while carefully recording his observations.

He was relentless in exhorting people to do their utmost to practice, promote, and protect the Vedas and the Shastras. Almost every talk of his ended with a strong statement followed by an appeal to the audience highlighting the importance of practice as opposed to talk. As he would say – This is a Dharma that requires to be practiced. The Vedas are the breath of God and it is our duty (to protect the Dharma) not just to God but to all the Rishis who have bequeathed this treasure to us.

The epitome of compassion

Once the “Pattatha Yanai” (The sovereign elephant) belonging to the Kanchi Mutt started to run amuck – running down the narrow street knocking down pandal legs, gates, thatched roofs of some houses – The mahout could not bring the elephant under control and eventually ran away fearing for his life. People living in the houses lining the street locked themselves inside their houses. When the Praramacharya learnt about this, he walked out alone went up to the elephant and said “Gajendra! What naughtiness are you indulging in? Go back in silence and lie down!” Immediately the elephant flopped down and lay down right there, filling the street. The Paramacharya called for incense, camphor, and flowers and proceeded to perform the Gajendra Puja. Finally, he offered the elephant a bunch of bananas. After the elephant had eaten the fruit bunch, the Paramacharya told the elephant “Get up and go. Don’t do any vishamam (mischief) henceforth.”

This ability to be able to impact another living being positively by the sheer power of his personality was probably because the Acharya was always in total harmony with his surroundings – the silence of the sky, the humming of the breeze, the thrum of the moving mass of devotees, the fragrance of the earth all seemed to be as much a part of him as they were a part of the surroundings.

On another occasion, a group of blind children from a school happened to visit the Mutt but on the specific day of their visit the Paramacharya was in “Mouna” (silence). It was the practice at the Mutt that when the Acharya was in Mouna no one dared speak to him – not out of fear but out of reverence. The Acharaya himself never broke his Mouna for anyone even if it was the Prime Minister of the Country.  Now, the teacher who had brought the blind children to the Mutt was extremely disappointed when the Mutt administrator informed him that since the Acharya was in Mouna there could not be any interaction on that day. In his disappointment the teacher was reduced to tears and even hit his forehead with his palms proclaiming loudly that these “poor” children have been deprived of the blessings and kind words of the Acharya.

The noise reached the Acharya’s ears and he beckoned the administrator and asked him what the matter was. When he was briefed about the matter, the Acharya immediately broke his Mouna. He spent the entire day with the children speaking to each one of them, blessing them, and offering them fruits – there were 100 children and almost the entire day was spent in the company of these children.

After the children had left for their homes, the administrator made bold to ask the Paramacharya as to how and why he broke his vow particularly when he was very strict in matters such as this. The Acharya replied “There is no Dharma bigger than Compassion. Always remember that…”

During the last two decades of his life, the Paramacharya descended into the silence of his own self. The voice and personage that inspired millions and the compilation of the magnum opus – Deivathin Kural (in Tamizh) and “The Voice of God” (in English) transformed into the form of the silent Guru – the Dakshinamoorti Swaroopa. The silence of the earth, calmness of still waters, and the majesty of infinite space had entered into him, in the all-encompassing silence of paripurnata.

As the Paramacharya said “Maunam is an important method of worshipping God. Maunam in this context does not mean merely silence. It is also the process of keeping the mind free of all thoughts. It implies that we should keep all our senses under perfect control, so that during the period of silence, the limbs may not move even involuntarily. Such a maunam will enable the divine spark within every one of us to become active in its progress towards the realization of the Paramaatma. The waves of thoughts that continuously rise and fall in our minds keep the all-pervading Atma hidden from us. Once the flow of thoughts is checked, the Atma begins to function. This kind of maunam is also an attribute of a muni. That is why we have been enjoined not to think for a while every day – tooshneem kinchit achintayan तूष्णीम् किञ्चिन्तयन्.”

This silence entered into the eternal silence on January 8, 1994.