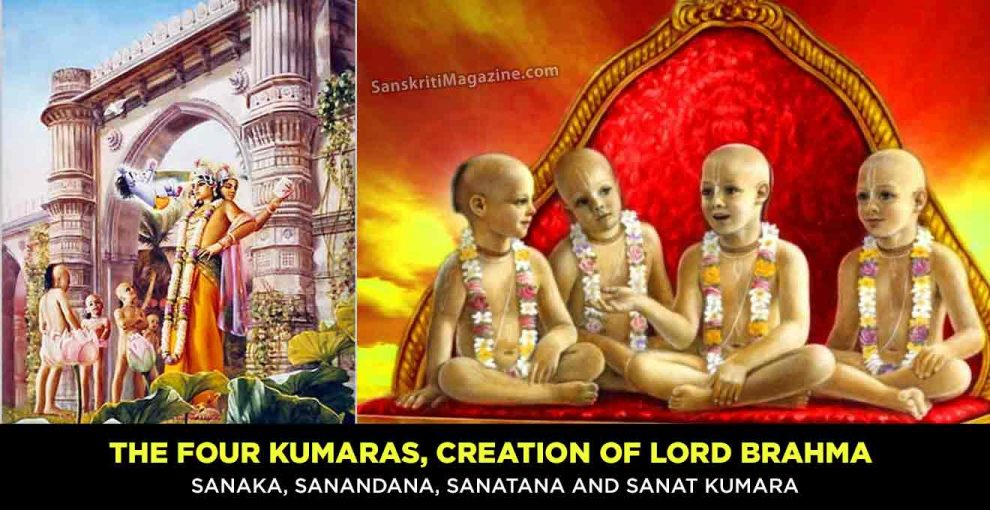 A man meets a virtuous person when his ‘good fortune’ arrives and his soul attains enlightenment and his mind becomes pure by the destruction of his ignorance and attachment. When Brahma decided to commence the sequence of creation, he first of all created four Kumaras by just having a wish in his mind.

They were Sanaka, Sanandana, Sanatana and Sanatkumara. Brahma had experienced the sight of Lord Vishnu sleeping on the back of Ananta Shesha after performing penance for thousands of years. Lord Vishnu pleased with his penance gave to him the basic knowledge of the Veda. Only after getting that knowledge, he commenced his creation. 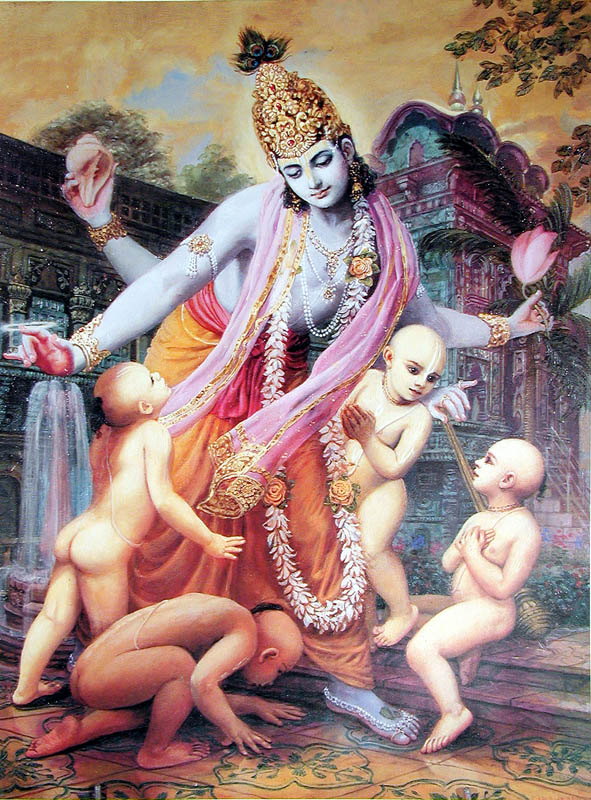 When the four Kumaras came into existence, they were all embodiments of pure qualities. They did not have any sign of negative qualities like laziness, sleep etc. Brahma had created these four Kumaras so that they could help in the process of creation. But they refused when they were ordered by Brahma to do so. So these four Kumaras—kumara means unmarried brahmacaris. Because in the beginning Brahma begot so many sons, and each of them were asked to increase the population.

Sanaka, Sanandana, Sanatana, they were also requested by their father to increase population, but they refused. They said, “No, we are not going to be entangled in these material affairs. We shall remain kumaras, brahmacharis, and preach the glories of Godhead,” by which Brahma became angry. And while he was angry, from his anger Rudra, Siva, was produced frm his forehead.

Actually these four Kumaras are eternaly liberated souls. All of them are pious and virtuous right from their birth and engaged themselves in activities like chanting the name of the Lord, listening about the lords divine activities, pastimes etc. Not for a single moment in their minds, came the desires for worldly matters. They chant ‘Hari nama’ all the time. They never utter anything mundane. The constant chanting of this mantra has its effect. They never face any danger to their lives and always remaine like a child of five years. Neither do they have mudane desires nor do they suffer from defects.

These four Kumaras, as siddhesvaras, had achieved all the yogic perfectional achievements ( siddhis ), and as such they travel in outer space without machines.

Prithu and sage Narada were fortunate to receive knowledge from these Kumaras.

General Lessons from the Kumars

KUMARA SANAKA: There is no greater pilgrimage like the river the Ganges, no greater teacher like one’s own mother, no deity like Lord Vishnu and the Guru is the greatest of all. There is no other brother like peace, no other penance like truth, no other gain better than salvation of the soul and there is no river like the Ganges. Charity, enjoyment and destruction are the only three movements of wealth. The wealth which is neither used in doing charities nor is cherished gets destroyed. Plants too have lives and nourish and protect the human society with its fruits, roots and branches. If a man does not chant the holy , then he is like a dead person.

KUMARA SANANDANA: Bhagavan (Krishna) means, one who is full of all the splendours, all the virtuousness and religiousness, all the fame, all the knowledge, all the wealth and fortune and also possesses all the apathy and who also knows the cause of the creation and destruction. One who has the knowledge of all these 6 things is entitled to be called learned.

KUMARA SANATANA: One must follow the rules as it has been described in the sacred texts on Dashami (Tenth Day), Ekadashi(Eleventh Day) and Dwadashi (Twelfth day). One should avoid the followings ten things on Dashami day- pots and vessels made of bronze, eating grains, honey, spinach, pumpkin, lentils and food given by others, having food for the second time in a day and making sexual contacts with wife. On Ekadashi, the following should be avoided- gambling, sleeping, chewing beetle leaves, brushing of teeth, violence, copulating and untruthfulness. On Dwadashi, the following should be avoided- items made of bronze, wine, honey, oil, untruthfulness, doing exercise, going abroad, having food twice during the day, copulating and touching those things which are not worth touching and eating lentils.

KUMARA SANATKUMARA: One who has is self-realized neither sees the death of the body, diseases nor the sorrows because he understands that the real self is the soul (Atma). When the diet is pure then the inner self becomes pure and when the inner self becomes pure then he acquires remembrance of his past lives (Smriti) and he attains eternal knowledge about the permanence of the soul and the ephemeral nature of the physical body. Fools and ignorant people are fearful of thousands of things but the learned man who has attained self-realization is not affected by the fear. Death and fear have been conquered. The material environment becomes friendly and serves the devotee with folded hands.