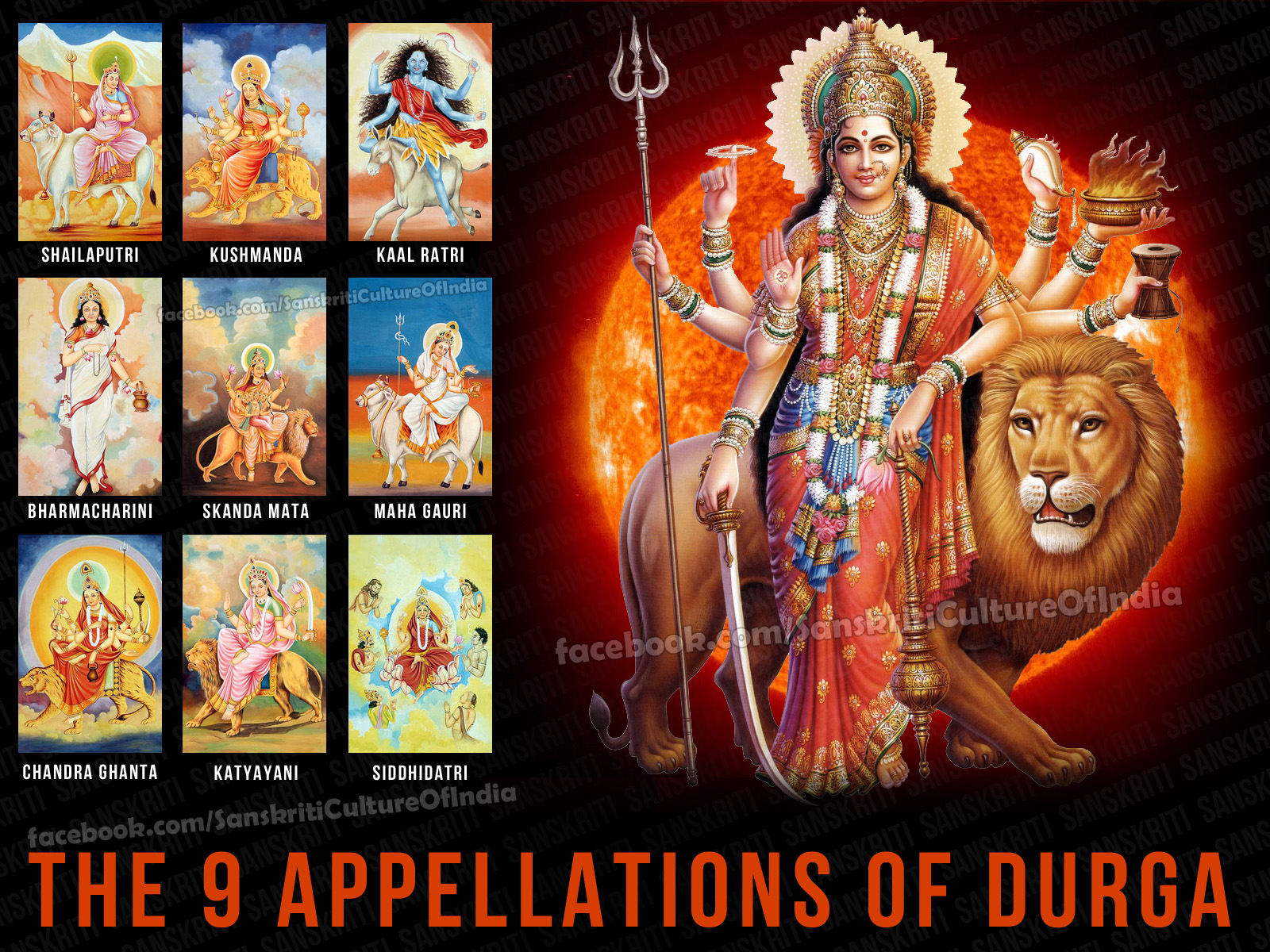 Here is brief details of the 9 manifestations of Goddess Durga. Each goddess has a different form and a special significance. Nava Durga, if worshipped with religious fervor during Navaratri, it is believed, lift the divine spirit in us and fill us with renewed happiness.

All the nine names of goddess are narrated in ‘Devi Kavacha’ of the ‘Chandipatha’ scripture. Learn about the nine goddesses in the following slides that include beautiful watercolor paintings of each appellation.

Shailaputri literally means the daughter (putri) of the mountains (shaila). Variously known as Sati Bhavani, Parvati or Hemavati, the daughter of Hemavana – the king of the Himalayas, she is the first among Navadurgas. Her worship takes place on the first day of Navaratri – the nine divine nights. The embodiment of the power of Brahma, Vishnu and Shiva, she rides a bull and carries a trident and a lotus in her two hands. READ MORE ABOUT SHAILPUTRI

She is worshipped on the second day of Navaratri and is the second form of Mother Goddess. Bharmacharini means one who practices devout austerity. She enlightens us in the magnificent embodiment of Durga with great powers and divine grace. She holds a rosary in her right hand and a water utensil in her left hand. She is blissful and endows happiness, peace, prosperity and grace upon all devotees who worship her. Filled with bliss and happiness, she is the way to emancipation – Moksha. READ MORE ABOUT MA BRAHMCHARINI

The third facet of Goddess Durga is ‘Chandraghanta’, who is worshipped on the third day of Navaratri, for peace, tranquility and prosperity in life. She has a ‘chandra’ or half moon in her forehead in the shape of a ‘ghanta’ or bell. That is why she is called ‘Chandraghanta’. She is charming, has a golden bright complexion and rides a lion. She has ten hands, three eyes and holds weapons in her hands. She is the apostle of bravery and possesses great strength to fight in the battle against demons. READ MORE ABOUT MA CHANDRAGHANTA

Kushmanda is the fourth form of the mother goddess and is worshipped on the fourth day of Navaratri. The meaning of the name ‘Ku-shm-anda’ is as follows: ‘Ku’ = a little; ‘ushma’ = ‘warmth’; ‘anda’ = ‘the cosmic egg’. So she is considered the creator of the universe. The universe was no more than a void full of darkness, until her light spreads in all directions like rays from the sun. Often she is depicted as having eight or ten hands. She holds weapons, glitter, rosary, etc., in her hands, and she rides a lion. READ MORE ABOUT MA KUSHMANDA

The fifth aspect of the Mother Durga is known as ‘Skanda Mata’ – the mother of Skanda or Lord Kartikeya, who was chosen by gods as their commander in chief in the war against the demons. She is worshipped on the fifth day of Navaratri. She is accompanied by the Lord Skanda in his infant form. Skanda Mata has four arms and three eyes, holds the infant Skanda in her right upper arm and a lotus in her right hand which is slightly raised upwards. The left arm is in pose to grant boons with grace and in left lower hand which is raised also holds a lotus. She has a bright complexion and often depicted as seated on a lotus. READ MORE ABOUT MA SKANDAMATA

The sixth form of Mother Durga is known as ‘Katyayani’, who is worshipped on the six day of Navaratri. The legend behind her name goes thus: Once upon a time, there was a great sage called Kata, who had a son named Katya. Kata was very famous and renowned in the lineage of saints. He underwent long austerities and penance in order to receive the grace of the Mother Goddess. He wished to have a daughter in the form of a goddess. According to his wish and desire the Mother Goddess granted his request. Katyayani was born to Kata as an avatar of Durga. READ MORE ABOUT MA KATAYANI

This is the seventh form of Mother Durga and is worshipped on the seventh day of Navaratri. She has a dark complexion, disheveled hair and a fearlessness posture. A necklace flashing lightning adorns her neck. She has three eyes that shine bright and terrible flames emanate from her breath. Her vehicle is the donkey. Her raised right hand always seems to grant boons to all worshippers and all her right lower hand is in the pose of allaying fears. Her left upper hand holds a thorn-like weapon, made of iron and there is a dragger in the lower left hand. She is black like Goddess Kali and holds a sparkling sword in her right hand battle all evil. Her gesture of protection assures us of freedom from fear and troubles. So she is also known as ‘Shubhamkari’ – one who does good. READ MORE ABOUT MA KAALRATRI

She is worshipped on the eighth day of Navaratri. Her power is unfailing and instantly fruitful. As a result of her worship, all sins of past, present and future get washed away and devotees get purified in all aspects of life. Maha Gauri is intelligent, peaceful and calm. Due to her long austerities in the deep forests of the Himalayas, she developed a dark complexion. When Lord Shiva cleaned her with the water of the Ganges, her body regained its beauty and she came to be known as Maha Gauri, which mean extremely white. She wears white clothes, has four arms, and rides on a bull. Her right hand is in the pose of allaying fear and her right lower hand holds a trident. The left upper hand holds a ‘damaru’ (a small rattle drum) and the lower one is in the pose of granting boons to her devotees. READ MORE ABOUT MA MAHAGAURI

Siddhidatri is the ninth form of Goddess. She is worshipped on the ninth day of Navaratri. Siddhidatri has supernatural healing powers. She has four arms and she is always in a blissful happy enchanting pose. She rides on the lion as her vehicle. She blesses all Gods, saints, yogis, tantrics and all devotees as a manifestation of the Mother Goddess. In ‘Devi Bhagvata Purana’ it is mentioned that Lord Shiva worshipped her and was blessed with all Siddhis (supernatural powers). By her blessings his half body became female and other half body male in the avatar of Ardhnarishvara. READ MORE ABOUT SIDDHIDATRI