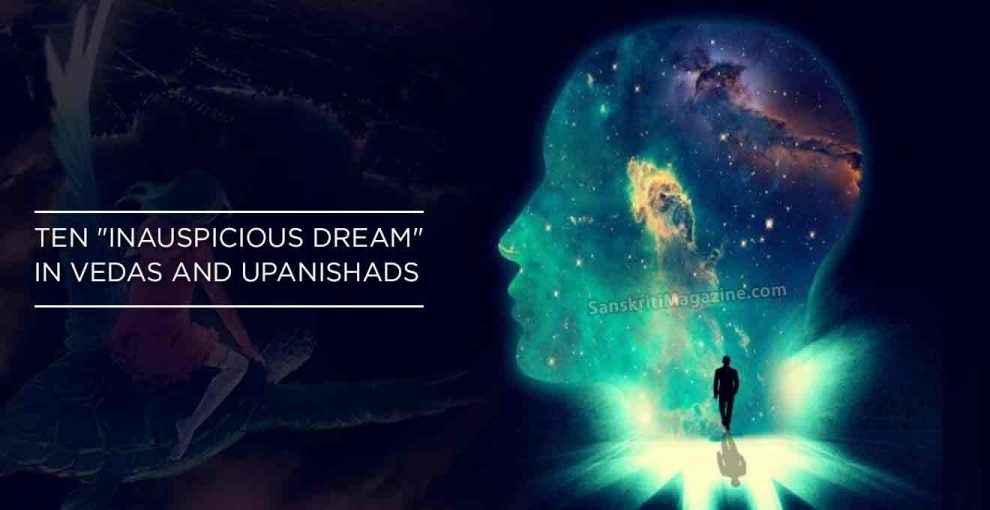 Hindus stand out in understanding TIME, Working of MIND and Explaining DREAMS. Western scientists have not reached the level of Hindus In these fields. They still lag behind.

Dreams find a place in a Hindus’ everyday life. They knew about the REM sleep and the unavoidability of dreams. Brahmin Hindus pray to Sun thrice a day to kill the nightmares (Dus Swapna Nasanam). This shows how much they have understood about the dreams.

Adi Shankara, greatest philosopher of India, use dream hundreds of time in his hymns and commentaries. Mandukya Upanishad use it to explain the state of mind. Varahamihira, author of Brhat Samhita and several others before him dealt with the dreams. Hindus have several books interpreting dreams. Poets of Sangam Tamil literature even sing about the dreams of birds and animals. Tamil encyclopaedia Abidhana Chintamani has a summary of the interpretation of dreams over six pages. It is the summary of Sanskrit book on dreams attributed t Deva Guru Brhaspati. Like the dream of a dumb person is a popular simile used in Hindu literature.

The meaning of dreams was an interesting part of Vedic literature. It is dealt with in various passages, including an Athrvan Parisista. The Rig Veda regards as ominous the making of a garland or neckband in a dream.

Ten dreams which presupposed death are recorded in Aitareya Aranyaka (3-2-4); they are

In classical Sanskrit literature we have several references to dreams.

Svapna is the Sanskrit word for dream. In Sanskrit hymn books there special slokas/hymns to avoid nightmares.

Do our Dreams Have Meaning?

Every one of us dreams at night. Most of them are without any meaning. We couldn’t even remember them the next morning. But now and then we read in newspapers or our ancient scriptures about some dreams becoming prophetic. What is the truth?

A devote Hindu knows the importance of good sleep. He prays for it in the Rudram – Chamakam of Yajur Veda. Every day, Brahmins pray to God three times a day to not give them “dus swapna” (nightmares). Ref. Adyano deva savita:,Sandhyavandana Mantra.

Western psychoanalyst Sigmund Freud interpreted dreams as wish fulfilment (nightmares being failed dreams prompted by fears of repressed impulses). In short western psychologists saw them as suppressed desires, feelings and wishes. According to the scientists, dreams occupy one fifth of our sleep and they happen during the REM (Rapid Eye Movement) period of sleep. REM sleep means that the cortex of the brain is about as active as during waking hours.

Hindus don’t agree with western views. We see more meaning in dreams. We think they are telling you what is going to happen to you – like winning the lottery or becoming ill or some misfortune to our near and dear. But not all the dreams are interpreted in this way. Hindus have analysed the status of the mind better than modern scientists. All our religious literature speaks of Jagrat (waking) Swapna (dream) Sushupti (deep sleep) and Turiya (an experience of pure consciousness beyond the three stages of sleep – there is no English word for it).

Swami Sivananda of Rishikesh who himself was a doctor turned ascetic explains dreams in a beautiful way in his book The Philosophy of Dreams ( It is available free of cost on the Divine Life Society website):

“Every dream presentation has a meaning. A dream is like a letter written in an unknown language. To a man who does not know Chinese, a letter written in that language is a meaningless scroll. But to one who knows that language it is full of most valuable information. It may be the letter calls for immediate action; or it may contain words of consultation to one suffering from dejection. It may be a letter of threat or it may speak of love. These meanings are there only to one who would care to attend to the letter and would try to decipher it. But alas! How few of us try to understand these messages from the deep unseen ocean of our own Consciousness!”

We have references to dreams in the Rig Veda, Kaushitaki Brahmana, Chandogya Upanishad and other classical Sanskrit literature. They treated dreams as prophetic- conveying some message of the future. For instance, the Chandogya Upanishad (V 2-8-9) says seeing a woman in a dream means a previous sacrifice (fire ceremony) was successful. But it gives conditions for such dreams. Kaushitaki Brahmana says seeing a man in black with black teeth is not a good omen. Some people even receive messages in dreams. Rishi Viswamitra received mantra upadesa from Lord Siva in his dream. Advocate of Vishistadvaita Sri Ramanuja believed that the dreams are caused by the Lord.

Before great men were born, the women had strange dreams. We see this in the birth of Jain saint Vartaman Mahavira, Gautama Buddha, Sri Ramakrishna Paramahamsa, Swami Vivekananda and several saints. Bhuvaneswari Devi, mother of Swami Vivekananda dreamt of Siva agreeing to be born as her son. Being a great devotee of Lord Vireswara Siva of Varanasi, she gave the name

Vireswara to her son. Later it was changed to Narendra and then to Vivekananda.

Ramakrishna Paramahamsa’s parents experienced supernatural incidents, visions before his birth. His father Khudiram had a dream in Gaya in which Lord Gadadhara said that he would be born as his son. Chandramani Devi is said to have had a vision of light entering her womb from Shiva’s temple.

Gauthama Siddhartha’s mother Maya Devi and King Sudhdhodana were trying for a baby for twenty years after their marriage. One day she had a dream of a white elephant with a lotus flower in it’s trunk going around her three times and entering her womb. Before this she dreamt of bathing in a lake in the Himalayas. She was carried away to the lake by four angels in her dream.

Mother of Mahavira Trishala had 16 auspicious dreams before his birth. When King Sidhdharth consulted his astrologers they told him that there were 72 auspicious dreams according to the books on dreams and the king was going to get a son who will rule a spiritual empire. Trishala saw

10. A throne of rubies and diamonds

16. A white elephant entering her.

Seeing an elephant in a dream is considered auspicious. In most of the cases of divine births, we see a light entering or elephant entering the mother’s body.

Messages from the Departed souls

The previous Head of Madurai Adheenam (Saiva Mutt) who died several years ago did a lot of research about communicating with dead people. He has narrated several incidents where departed souls appeared in dreams to warn people about coming dangers.

When Vallabhacharya was born prematurely without life signs, his mother left him under a tree. When she came home with all the sadness, she dreamt of Krishna saying to her that he was born as a child to her. She ran back to the tree where the boy was alive and kicking with a divine fire protecting him. All of these stories impart some knowledge about dreams to those who have an interest in their interpretation.

Swami Vivekananda also narrated a strange dream about Jesus Christ to his disciples. Read it in his own words:

“I had a curious dream on my return voyage to England. While our ship was passing through the Mediterranean sea, in my sleep, an old and venerable looking person, Rishi-like in appearance, stood before me and said: I am one of the ancient order of Theraputtas which had its origin in the teaching of the Indian Rishis.
The truths and ideals preached by us have been given out by Christians as taught by Jesus: but for the matter of that there was no such personality by the name of Jesus ever born. Various evidences testifying to this fact will be brought to light by excavating here. By excavating which place can those proofs and relics you speak of be found? I asked. The hoary-headed one pointing to a locality of Turkey, said, see here.
Immediately after, I woke up, and at once rushed to the upper deck and asked the captain, ‘what neighbourhood is the ship in just now?’. ’Look yonder’, the captain replied, ’there is Turkey and the island of Crete’.”

The hero of the story is presented with an exact painting of a girl he had previously seen in a dream in the court of King Udayanan. Indians do not miss any opportunity to use a dream as the basis of their novels, dramas and films.

Indian mathematical genius Srinivasa Ramanujan said that he received his inspiration and mathematical solutions in his dreams. He attributed this to the Goddess at Namakkal. He said:

“While asleep I had an unusual experience. There was a red screen formed by flowing blood as it were. I was observing it. Suddenly a hand began to write on the screen. I became all attention. That hand wrote a number of results in elliptic integrals. They stuck to my mind. As soon as I woke up, I committed them to writing”

The most famous Tamil epic Silappadikaram narrated the vivid dreams of Kovalan and Kannaki, the hero and the heroine in great detail.

Tamil Bhakti literature (5th to 9th centuries) has a lot of references to dreams. 2000 year old Tamil Sangam literature talks of animals dreaming – a concept which modern research at MIT and other scientific institutions recently confirmed.

Finally, I will leave you with a list of great people who attributed their discoveries or inventions to strange dreams:

1. F.A. Kekule: saw the structure of Benzene in his dream and revealed it to the world

2. Abraham Lincoln: dreamt of his assassination just before his death and told his friends

3. Otto Loewi: won the Nobel prize for Science having discovered the chemical transmission of nerve impulses in a dream

4. Paul McCartney: He got his tune for the ‘Yesterday‘ in a dream

5. Mary Shelley: the idea for Frankenstein came to her in a dream

6. Elias Howe: invented the sewing machine from a dream

7. Stephen King: the famous novelist’s plots came from his dreams