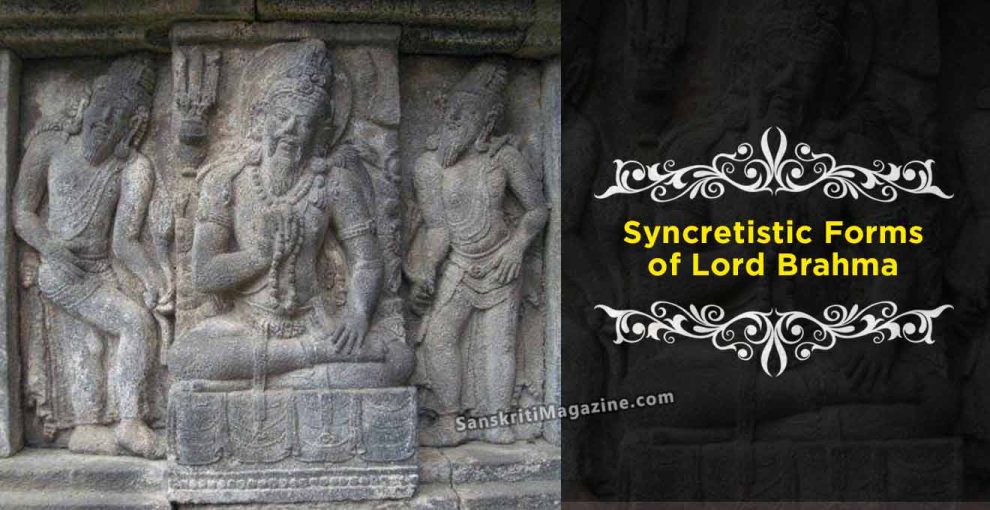 Having covered the final cluster of Brahma temples in Kanchipuram and before moving on to the other temples in Tamil Nadu, we would like to interject a few passages from a paper done by Dr. Raju Kalidos, head of the Department of Sculpture and Art History at the Tamil University in Tanjavur. The reader will find several references in this series to the research work of Dr. Kalidos, who publishes regularly in academic journals around the world. He’s considered a great authority on South Indian temple architecture and iconography.

A few years ago, Dr. Kalidos wrote a very interesting paper entitled “Trimurti Orientation in Medieval South Indian Temples” which was originally published in Kala, the Journal of the Indian Art History Congress (Vol. I, 1994-95). Several of the temples we’ll cover in Kanchipuram are Trimurti temples, and we hope the background information in Dr. Kalidos’ paper will help to increase our reader’s appreciation for Lord Brahma’s residence in these temples.

The presence of Trimurti temples in South India will be discussed in further detail as we move on to Mahabalipuram, and discussion of an epigraph in which King Mahendravarman I announced his first rock-cut temple construction in Mandagappattu:

“This brickless, timberless, metalless and mortarless mansion (i.e. temple) for Brahma, Isvara and Visnu was caused to be created by the King Vichitrachitta”

As described by Dr. Kalidos:

“The Mandagappattu inscription of the Pallava king, Mahendravarman I (ca. AD 610-30), is outspoken in declaring that temples for the Hindu Trinity (i.e. Brahmesvara Visnu), were erected during the early medieval period of which there are several examples, both in the Deccan and the Far South.”

It’s interesting to note the combined form of Brahma and Isvara (Shiva) in the name ‘Brahmesvara’. This consolidation is extended, in some cases, to the combining of attributes found in deities, which may then conveniently be considered either Brahma or Shiva, depending on the sentiment of the devotee.

The Doctor goes on to say:

“In the Krishna delta there are examples among the Moghulrajapuram and Vijayawada groups of rock-cut cave temples. All were intended for the Trinity though the caves at present are devoid of any iconographical illustration. There are also few iconographical forms of the medieval times (e.g. Trimurti of the Elephanta type, Somaskandamurti and Ekapadamurti), which purport to illustrate a syncretistic form of the Trinity. That means at a particular point of time in South Indian iconographical tradition, Trimurti was popularly cult-oriented. Later, the cult seems to have fallen into oblivion as images of Brahma are not to be found enshrined under the roof of a garbhagrha due to the mythological version that Brahma was not to be adored as housed in temples.” 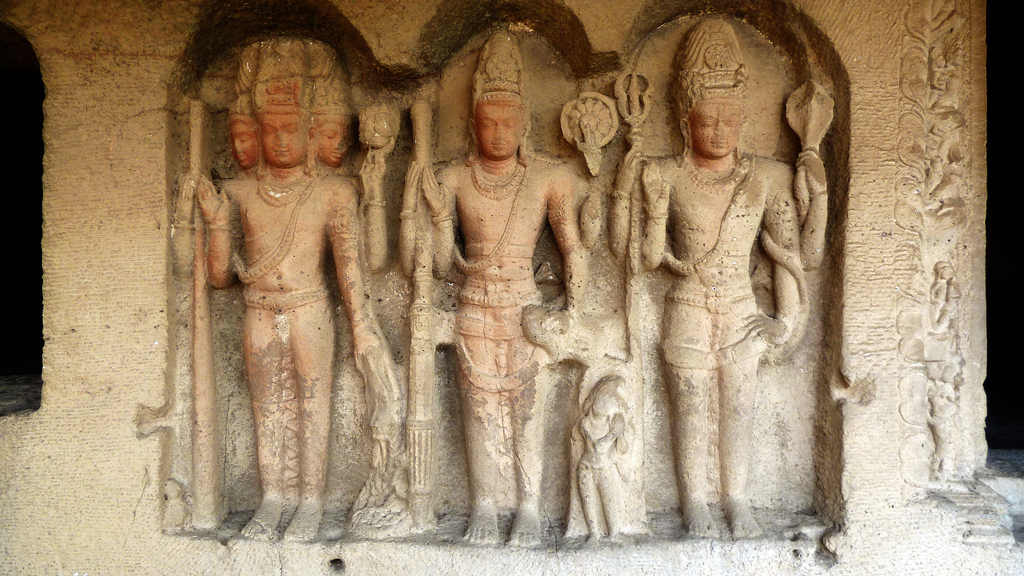 Previously in the series, we saw examples of the syncretistic forms of Lord Brahma mentioned here, Somaskandamurti and Ekapadamurti. Somaskandamurti is the image of Lord Brahma beside Shiva, Uma and Skanda, while Ekapadamurti is the one-legged form of Visnu, with Shiva and Brahma extending out sideways from his body, attached by their legs. And while it’s interesting that Dr. Kalidos also acknowledges the infamous curse being the cause of Brahmadeva’s worship fading out, he unfortunately uses the mistaken term “mythological” in referring to sastric references on the matter.

In the next passage, the Doctor gives further support for the idea that Lord Surya and others eventually replaced Lord Brahma, and we have also seen these examples in previous segments, as Brahma was removed from the Trimurti and another personality inserted, creating a new ‘Trikuta’, or triad of divine personalities.

“So, during the later medieval period (say, after AD 850), it appears that temples for the Trimurti were rare. Interestingly enough, there were few examples of the Kakatiyas and Hoysalas in Andhradesa and Karnataka. The Kakatiya temples are to be found in and around Warrangal, the metropolis of the kingdom. Of the Hoysala temples, the best examples are Trikutesvara at Gorur, Mallikarjuna at Basuralu and Hariharesvara at Harihar (Settar 1992: 193, 196, 210). These temples are in trikuta pattern as it is the case with the Tirupparankunram south cave (Kalidos 1991: fig. 1. cf. Rajarajan 1991: figs.1-3, 6). The later medieval traditions as followed by the Kakatiyas and Hoysalas disregard Brahma and introduce Surya and others.”

Dr. Kalidos goes on to explain in detail the iconographical and architectural evidence found primarily in South Indian temples, which documents the progressive minimization and eventual elimination of worship of Lord Brahma, the transformation of his forms and attributes into other deity personalities, and the change from Trimurti to Trikutacala temple worship, which represents the formalization of this process in Saivite and Vaisnava temples. While we did not come across the Kalidos paper until well into our research for this series, we were pleased to see the degree to which a classical definition of this trend exists, as we have watched it slowly unfold during our own search for Lord Brahma’s temples.

Following is a longer excerpt from Dr. Kalidos’ paper, in which he explains in quite precise terms how the disappearance of Lord Brahma from temple worship took place, in South India and elsewhere.

“A significant development under the Kakatiyas is that Surya replaces Brahma. Neither Surya nor Surya-Narayana find a place among the Hoysala temples. The problem with the Kakatiya mode is whether Brahma could be replaced by Surya. It seems, it is possible. According to the Saradatilaka, quoted in Sritatvanidhi (II,5:2), there is a form of polycephalous Surya, called Caturvaktra-Surya. He is endowed with astabhuja-s; holding the khatvanga, padma, cakra, sakti, pasa, ankusa, japamala and kapula. He is trinetra and attended by his wives, Chaya and Usa. He wears the sakalabharana-s, including ratna krita and ornaments inlaid with diamonds and has the body shining like gold.

What is important in this form is that the laksana-s, characteristic of Surya (padma), Brahma (aksamala), Visnu (cakra) and Siva (khatvanga and kapala) merge into an entity to constitute the four-faced Sun-God. So, this aspect of Surya is viewed as an amsa of several gods of whom one is Brahma. Now, there is a pretext to view Surya as an amsa of Brahma. Maybe such factors moulded the placement of Surya in Kakatiya temples, replacing Brahma of an early tradition. Furthermore, the mythological stigma that an image of Brahma should not occupy the cella was also a factor behind the ejection of the Lord from the core temple.

The ejection of Brahma from the temple core is likely to have taken place around the 8th century AD. The Tirupparankunram north group of caves provides clues towards this end. The original cave here was for Siva and Visnu (Rajarajan 1991: fig.4). During the reign of Varaguna Pandya (AD 767-815) some alterations and additions were made to the original rock-cut temple in the Kali year 3,874 (AD 773-4). The addition was a separate cella for Devi in which place we find Brahma in the Tiruccirappalli cave. It is a naive pointer to the fact that Brahma was taken out of the core temple. In case of the Tirupparankunram cave temple, he is assigned a place, just above the pranala, meant for the chamber of Siva (Rajarajan 1991: fig. 3).

In the Cola temples, later, Brahma sticks to his place in the devakostha which appears above the pranala. Devi taking the place of Brahma is important in the sense that a feminine form of godhood occupies the place of a male form. We may also suggest the case of a parallelism in respect of the cella for Brahma and an image of the Goddess in Mahisasuramardini form (in case of the Tirupparankunram cave also it is Mahisasuramardini who stands on the decapitated head of Mahisa) who appears on the side wall, coeval with Sesasayi. Again, in the Elephanta type of Trimurti the left face in profile, representing Brahma, is feminine in some cases. He being the Hirnyagarbha, perhaps a feminine character would have been an accepted norm.

Surya as an amsa of Brahma seems to be shown in the Tiruccirappalli lower cave also (Srinivasan 1972:52). The image of Surya-Narayana in this case holds the aksamala in its right para hasta, thereby suggesting a case for the union of Surya, Visnu and Brahma.

All these points would allow us to generalize that the replacement of Brahma by Surya was already a regulated idea. The Kakatiyas added solid dimension to the tradition by accommodating such a form in their temples. According to the standard set by them, the Trimurti-s were Siva, Surya and Visnu. There are some internal evidence in the Kakatiya temples to prove the idea. There are few miniature reliefs in the Kakatiya temples. The 1,000- pillared temple of Hanumakopla on the lintel of the door frame of the Visnu shrine consists of a representation of Trimurti-s who are Siva as Nataraja, the trimukha-Brahma and Visnu (Nigam 1980:93). Image carvings at such a location in the Hindu temple are supposed to indicate the dedication of a garbhagrha to the deity illustrated. This is to prove that the Kakatiya temples are basically dedicated to the Trimurti though actually one of the cellae houses an image of Surya in place of Brahma.

About the 7th century AD all three members of the Hindu Trinity held a status of primus interpares. This is proved by the iconographic models in which the three appear in a panel. Brahma is in centre in the Tiruccirappalli lower cave. Siva occupies the centre in Lankesvara of Ellora. Visnu takes the central position in the Milkmaids cave of Ellora. After the 8th century AD Brahma gets out of the picture and it is either Siva or Visnu who gets priority. This trend continued up to late medieval times as is proved by a panel of Trimurti relief found in the Lucknow Museum. In this case, it is Visnu who is in centre, thus falling in line with Milkmaids cave representation (Fig.79-B).

To sum up, the Trimurti cult had a sway over South Indian temples during the 7th century AD. There were three ways by which the cult was perpetuated: (1) having images of the three gods in three separate cellae; (2) representing the deities in three separate forms but falling within a bigger frame (e.g. the Lankesvara of Ellora and Lucknow Museum piece), and (3) giving shape to syncretic iconographical forms (e.g. Ekapadamurti, Lingodbhava and Somaskanda). The tradition of placing the Trimurti in separate cellae continued up to the Kakatiya time. They also introduced some innovations by replacing Brahma with Surya. The Hoysalas took to different modes of representation. Both the Kakatiya and Hoysala added significantly in the history of south Indian temple architecture by giving shape to trikutacala types of which the masterpieces are to be found deep in Karnataka. Thus, from the 7th to the 14th century AD an age stands after the Trimurti cult in south India which was popularized by the temple layout and the programme of iconographs.”