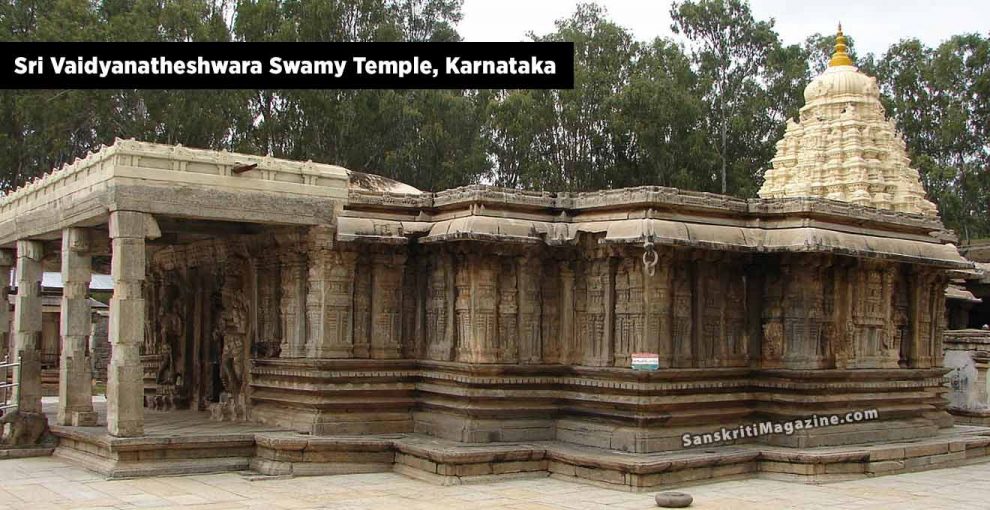 Talakad (also known as Talakadu) (Kannada: ತಲಕಾಡು) is a town on the left bank of the Kaveri river at a spot where the river makes a sharp bend. It is 45 km from Mysore and 140 km from Bangalore in Karnataka, India. A historic site, Talakad once had over 30 temples that today are buried in sand. Now it is a scenic and spiritual pilgrimage center. Here the eastward flowing Kaveri river changes course and seems magnificently vast as here the sand on its banks spreads over a wide area

We paused to give our feet a bit of rest and heard the story of Tala and Kada, the two hunters, after whom my guide says, this town in named. One more story, this time, it fuses a bit of religion as well. A sage, Somadatta and his disciples were killed by wild elephants when they were doing their penance. They were said to be reborn as elephants in the same forest. Two hunters, Tala and Kada watched the ritual of the elephants offering prayers to a silk cotton tree. And out of curiosity, axed the tree down, only to find it bleeding. A voice then instructed them to heal the wound with the leaves and the blood miraculously turned milk which immortalized the hunters and the elephants as well. A temple later was built here around the tree, and the place became known as Talakadu. 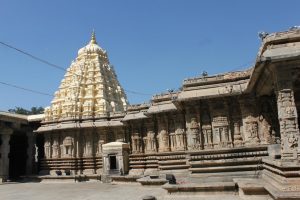 In 1634 it was conquered by the Mysore Rāja under the following circumstances. Tirumala-Raja, sometimes called Srī Ranga Raya, the representative of the Vijayanagar family at Srirangapatna, being afflicted with an incurable disease, came to Talkad for the purpose of offering sacrifices in the temple of Vedesvara. His wife Rangamma was left in charge of the Government of Srirangapatna ; but she, hearing that her husband was on the point of death, soon after left for Talkad with the object of seeing him before he died, handing over Srirangapatna and its dependencies to Rāja Wodeyar of Mysore, whose dynasty ever afterwards retained them. It appears that Rāja Wodeyar had been desirous of possessing a costly nose-jewel which was the property of the Rāni, and being unable to obtain possession of it by stratagem, and eager to seize any pretext for acquiring fresh territory, he levied an army and procceded against Talkad, which he took by escalade ; the Raja of latter place falling in the action. The Rani Rangamma thereupon went to the banks of the Cauvery, and throwing in the jewel, drowned herself opposite Mālingi, at the same time uttering a three-fold curse,-“Let Talakad become sand ; let Malingi become a whirlpool ; let the Mysore Rajas fail to beget heirs.” The latter part is now happily of no effect.
The following is what is known as the curse of Talakad, in the original –

At Talakad sand covers the temples. Stone pillars, square at the base and made to fit into a wheel below the abacus, lie scattered about. Among the temples of Talakad, the Pathaleshwara, Maruleshwara, Arkeshwara, Vaidyanatheshwara and Mallikarjuna temples, the five Lingams believed to represent the five faces of Shiva, form the Pancha pathi and have become famous. In honour of these five Shiva temples, a fair is held once every 3 to 12 years called Panchalinga Darshana, last held in 2009. The Panchalinga Darshana is held on a new moon day in the month of Karthika when two stars conjoin, the stars of Khuha Yoga and Vishaka.On this day, tradition has it that pilgrims should first bathe in the Gokarna theertham, worship Gokarneswara and Chowdeswari, and then worship Vaidyeshwara, and then bathe in the northern eastern southern and western stretches of the Kaveri and then worship Arkeshwara, Pataleshwara, Maraleshwara and Mallikarjuna, returning to Vaidyeshwara after each worship, finally worship Keerthinarayana and conclude the pilgrimage in one day.

It is the classical Indian story . A tale told by gods and demons, filled with kings and queens, replete with curses and boons. There is a little bit of history here, blended with some geology and topped with legends and myths. Set on the banks of the River Cauvery in Karnataka, this saga dates back to the 4th century and has certain intriguing elements, defying the very laws of nature.

Talakadu – Buried under the sands

It is the classical Indian story . A tale told by gods and demons, filled with kings and queens, replete with curses and boons. There is a little bit of history here, blended with some geology and topped with legends and myths. Set on the banks of the River Cauvery in Karnataka, this saga dates back to the 4th century and has certain intriguing elements, defying the very laws of nature.

is a pilgrim centre situated on the banks of the river Kaveri. Mudukuthore is a quiet village with a backdrop of a hillock called Somagiri. Mudukuthore is located at a distance of 48 km from Mysore, 25 km from Somnathapur, 18 km from T.Narsipur and is close to Talakad. The place is known for the temple of Lord Mallikarjuna. During January-February, every year, a big festival fair is organized for a two week where cattle are traded. This is one of the famous fair which crowds thousands of visitors.

The place gets its name Mudukuthore from the river cauvery as it gets a turn and flows forward. Muduku means ‘Diversion’ and Thore means ‘flow forward’.

During Mahabharatha period, Arjuna, One of the Pandavas stayed here on the hill. He carved the idol of Lord shiva and did pooja with “Mallika pushpa” (a kind of flower). That’s the reason the Lord shiva is called as Mallikarjuna.

The festival takes place simultaneously at the above five temples of Shiva. The temples are decorated with plantain stalks and flowers and the pilgrims undertaking Panchalinga Darshana offer their Pooja to the God.

The uniqueness of this festival is that the poojas at the five temples begin at the same time following the ancient tradition for obtaining blessings for devotees and rulers of the country. 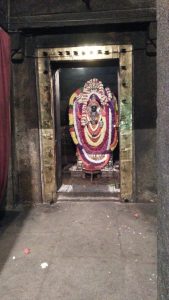 It is held at Talakad in Karnataka and involves the darshan of five Shivling during an auspicious period as per Hindu Panchang. The Panchalinga Darshana constitutes of darshan of Shivling at Vaidyeshwara, Pataleshwara, Maruleshwara,
Mallikarjuneshwara and Arakeshwara temples. It is believed that a darshan of the five Shivlings during the special occasion helps in attaining peace and prosperity. People also undertake the darshan to fulfill their desires.

This is Panchalinga darsana lakhs of people throng at this place to have the darsana of five lingas on a day on which strange astronomical combination takes place. This combination is as follows: It should be a new moonday of the month of Kartika and a Monday and the Sun should be in scorpio. This combination occurs at various intervals ranging from four to fourteen years. The last Panchalinga darjana took place on 16-11-2009.

This temple is slightly isolated. Near the Arkeshwara temple is the Kottai Vinayagar temple. There are idols for Bhairavar, Durgai and abhayangara lingam in this temple. There is a rock at the entrance with a Vaastu yantram. It is believed that tying deceased cows to this rock will cure them.

Half a mile to the North of the Keerthi Narayanar temple is the Maruleshwara temple. The huge Siva lingam here is considered to have been installed and worshipped by Lord Brahma. In the front mandapam there are idols of Maheswara, Thirumal, Ambigai, Surya, Ganapathi, Shanmugar, Veerabadhrar and navagrahams.

The Pataleshwara Shivalingam is said to change colors during the day (red in the morning, black in afternoon and white in the evening).

Talakad has three temples of Lord Shiva and one temple for Lord Vishnu. The temples of Shiva – Vaideeshwareswar temple, Pataleswar temple, and Maleswara temple belong to Panchalinga sites. The temple dedicated to Lord Vishnu is considered as one of the five Vishnu temples (called as Pancha Narayana) established by the great Vaishnavite saint Ramanuja in the 10th century AD. It is also believed that this temple of Lord Vishnu, called as Kirti Narayana temple was constructed by Hoysalas on their victory over Cholas. This is the only Hoysala architecture found in Talakad today.

“It was built by Vishnuvardan when he defeated the Cholas herein the 12th Century.”

During incessant rains and perhaps subsidence of the soil, the outer wall of the Garbhagriha collapsed. The Archaeological survey of India, after providing timely temporary support to prevent damage to the idols, have now decided to completely dismantle the structure and reassemble. It on a firmer foundation. The dismantling work is completed & rebuilding has commences. The icon of Lord Keerthinarayan the divine consert sundaravlli and those of Alwahs & Acharyas have been temporally installed of the Mahadvarham for the benefit of devotees.

Why Do We Wear Tulasi Mala?
Syncretistic Forms of Lord Brahma
Comment