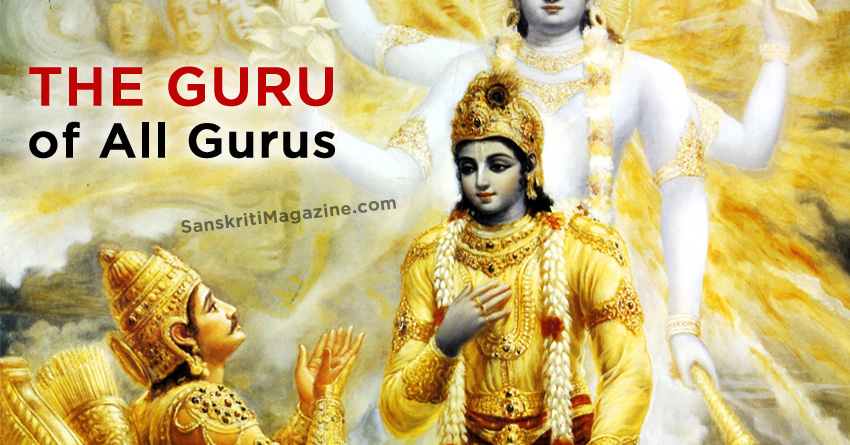 This day happens to be the most blessed and adorable day of the advent of Bhagavan Sri Krishna, which goes by the name of Sri Krishna Janmastami. Sri Krishna is considered as Jagatguru; he is the teacher of all teachers, the Guru of all Gurus – Krishnam vande jagadguru. There is no Guru equal to him. We consider Bhagavan Sri Krishna as an incarnation of the Supreme Being. You may have heard through your studies that there have been many incarnations of Vishnu: Narayana, Mastya, Kurma, Varaha, Narasimha, Vamana, Parasurama, Sri Ramachandra, and Bhagavan Sri Krishna.

One of the traits of the human being is to observe and evaluate everything from the viewpoint of the human being only. We judge even God from our point of view. “Where is the goodness of God,” we ask, “when He has created a world of evil – tempests, tornados, earthquakes, sufferings, drought and flood? What kind of God has created this world? God could have created milk and honey through the waters of the Ganga, instead of giving plain water. He could have created a round earth, without ups and downs, so that we may not fall down and break our legs. Why did God not do that, in all His capacity?” This is how we think.

So, the object that we think remains what it is, and it refuses to get into the yardstick of comprehension of the human being. People find fault with Rama and Krishna, also. “What kind of Rama is he? He killed Vali, and banished Sita, and so many things.” We do not understand that these Avataras are the indications and symbols of the development of divine consciousness. There is a gradational ascent through the evolutionary process of consciousness, into greater and greater perfections. Rama was not supposed to have behaved in any other way than he did behave. It was one stage in the evolution of the incarnation. He was Maryada-purushottama, an ideal human being, with all the qualities that we can find in a human being; and we cannot, and should not, expect qualities which are not in a human being, because he is Maryada-purushottama, a perfected human being – God manifested as a gentleman.

Here we have Sri Krishna Avatara, which is supposed to be a symbolic representation of the manner in which God Himself works. Nobody can know how God works, and whatever idea we may have of the manner in which God works, it is not appreciable to us because He devastates our ideas of propriety, ethicality, necessity, human-ness, and social values. Everything is put upside down.

We have systems of observation psychologically, humanly and socially. These are turned upside down by God. Actually, God is nothing but the total topsy-turvy operation of the human way of thinking. It is a Shirshasana of the consciousness of man that is required to understand what God is. We should not stand on the footstool of our consciousness, but on the brain of our consciousness.

There is always something that we grab and something that we exclude in our perception, which is the opposite of God’s way of inclusiveness. There is nothing that God can exclude from His thought, whereas in a human being, it is impossible not to exclude something. We seem to be the opposite of God in our way of thinking. We cannot grab the whole world into our comprehension at any time. Our way of thinking is only of our family, our office, our salary, our community, our relations, our property, and whatever belongs to us. When we say we are concerned with whatever belongs to us, we are not concerned with that which does not belong to us; so, to whom does the other thing belong? It is not our concern.

I am referring particularly to the great incarnation of Bhagavan Sri Krishna today on the occasion of this spiritual advent. Whatever he said and whatever he did was totally beyond the comprehension of the human psyche. Whatever he did from childhood till the end of his life is a historical incomprehensiveness for us. There is nothing that we can comprehend meaningfully in his actions. Everything looks funny, strange, and out of the way.

Read the Bhagavadgita, which he spoke. Everything is difficult. One Sloka seems to be contradicting another. One thing is said, then another thing is said. Everything is said in the seven hundred verses of the Bhagavadgita, but what is said, finally? We cannot make it out, due to the multifarious and multifaceted instruction that has been given to us through the multi-faced Universal Being, Vishvarupa. The one brain, and two eyes, and one thought of the human being cannot comprehend it. We must have as many heads as the Vishvarupa has in order to understand what the Gita said – as many eyes, as many mouths, as many processes of thinking, and as wide a consciousness.

The necessity to portray the advent and actions of these incarnations is precisely to present before us a picture of the divine way of operation taking place in the world. We do not like floods overflowing, destroying villages and killing people. We do not like cyclones breaking everything, throwing off rooftops and cutting off trees. We do not like tornadoes, or drought. What is it that we like? Sri Krishna’s comprehensiveness is itself an instruction. We do not require any commentary for the Bhagavadgita. The life of Krishna is a commentary on what he has said. As intricate as the multifaceted activity of Sri Krishna is, so intricate is also the multifaceted teaching of the Bhagavadgita. If we can understand who Krishna was, we can understand also what the Gita is.

Suffice it to say that Sri Krishna is considered as the ray of the Absolute, something like total comprehensiveness and infinite capacity, omnipotent in behaviour, with nothing impossible. He can set right anything in one minute, and if the necessity arises, he can dismantle the whole parliament of the cosmos and take up the reins in his own hands, which he did sometimes in his own career. Rules and regulations did he follow, but he could break any rule if the necessity arose, just as we can do anything to our own body for the sake of its sustenance.

We can have surgery performed on the limbs of our body. We can lose half the body by surgery. It is a very unfortunate thing, yet we may go to a doctor, pay lakhs of rupees as fee, and remove half of the body so that we may be happy. Where is the happiness when we have lost half of the body? This losing of half the body is necessary in order that we may exist as a complete human being. A complete human being is not the whole body. Even a half body can be a whole human being. We can ask any person who has lost everything below his thighs, with only the other half remaining, “Are you a half man?” “No, no! I am a full man,” he will say. That means the person is not the body. In a like manner, impossible it is to understand this divinity operating; and it is futile on the part of anyone to understand Krishna.

Great men think alike, and they perform actions in a similar way. They belong to a different fraternity altogether. God-men are God-men everywhere, and there is no such thing as an Eastern God-man or a Western God-man. And we should not use the word ‘men’, also. They are not men; they are not women – they are persons. We have no language to use. A woman can be a God-man, but because of the linguistic limitations we do not want to use words like ‘woman’ and ‘man’ and all that. So, we have to coin some new word. These days we say it is a ‘person’, a God-intoxicated person. It can be what is called a man or a woman; at that time, they cease to be human beings, and are neither men nor women.

They were androgynous perfections, standing for the word of the Almighty, who Himself is not a man or a woman. We may say “God, the Father in heaven” – it is a human, paternal way of addressing God. It is a psychological necessity; but God is impersonality – not human in nature.

That was portrayed dramatically, as if in a theatrical performance, in the picturesque drama of the life of Bhagavan Sri Krishna. This wonderful day we are observing it, and it is up to us to invoke the great blessings of this master so that he may enter into us. Mighty we may become. Mighty was Bhagavan Sri Krishna. May you all be mighty people!

The World Is A Transit Lounge
Is Astral Travel Possible?
Comment