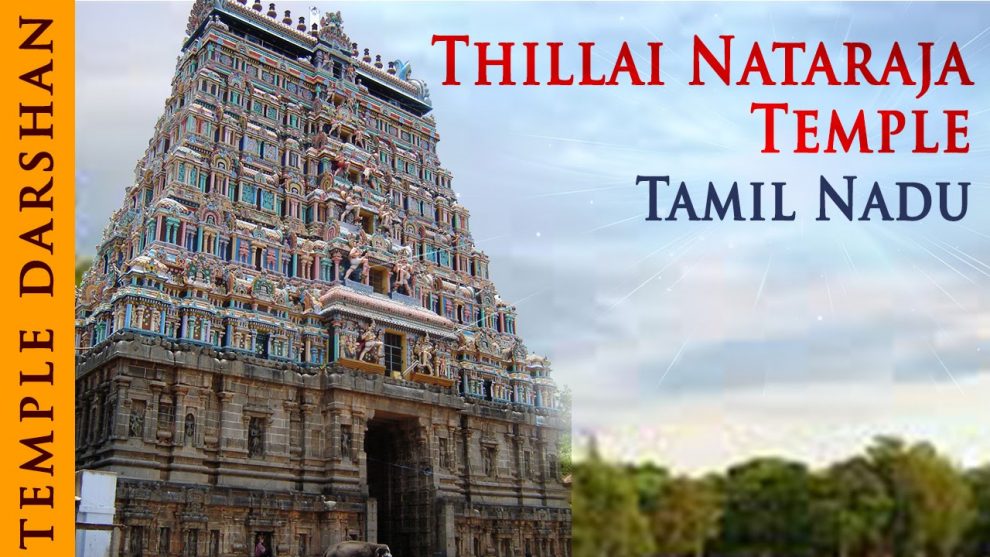 Tamil word KOIL means Thillai Chidambaram Natarajar temple for the Saivites and Srirangam Sri Ranganathar for the Vaishnavites as the spiritual capital of their respective faiths. All the four Saivite saints, Gnanasambandar, Tirunavukkarasar, Sundarar and Manickavasagar had praised Lord Nataraja in their moving devotional hymns Thevaram and Tiruvasagam. This is the first Shiva temple on the northern bank of Cauvery praised in Saivite hymns.

Festivals: 10 day Margazhi festival in December-January begins on the day prior to Tiruvadhirai star day with flag hoisting. The importance of the festival is that it is dedicated to Saivite Saint Manickavasagar. During the evening pujas of the festival, the saint is taken to the main shrine, where Arati is offered to Lord with chanting of Tiruvempavai songs authored by the saint. During the morning pujas the saint is honoured with Arati. An event called Vidayathi festival is celebrated both for the Lord and the saint. 10 day Aani Tirumanjanam begins with flag hoisting 10 days earlier of Uthira star day. From day one to eight of the festivals procession deities Somaskanda, Shivananda Nayaki, Vinayaka, Subramania and Chandeswararm (panchamurthis) are taken in procession in silver and gold vahans. On holy days as Tiruvadhirai star day in Chithirai (April-May) and new moon days, Lord Natarajamurthi grants darshan on the banks of Shiva Ganga theertham and in the following Tamil months too on this star day. Night festivals are celebrated in the temple in all months-Chithirai to Panguni (April-May to March-April) on the first day of the month, Tiruvadhirai and Karthikai star days, new moon and full moon days, Fridays and Pradosha days.

Presiding deity Tirumoola Nathar is a swayambumurthi. Yet, Lord Nataraja is the ruling deity. Of the panchabhoodha sthalas (places) Chidambaram belongs to Akasha. The hymns sung by Gnanasambandar, Tirunavukkarasar and Sundarar were found from this temple only.

The region was once dense with Thillai trees, hence the name of the place Thillai. These trees are not presently seen in the place. However, they are in the backwater area in Pichavaram east of Chidambaram. Within the temple the tree made of stone is on the western side of the prakara of Tirumoolattanar shrine.
The darshan of Lords Brahmma, Vishnu and Shiva is comfortably available to the devotees from the mandap before Lord Nataraja shrine. It is noteworthy that the famous Vaishnavite shrine of Lord Govindaraja Perumal temple, among the 108 Divyadesas is close to Lord Nataraja shrine. The temple for Thillai Kali who challenged Lord Shiva in the dance contest is also nearby. 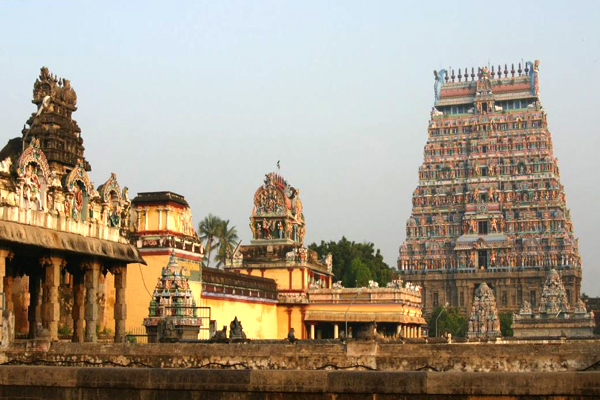 This is a very big temple covering 51 acres, speaking volumes of the temple architecture skills of Tamilnadu. Of the five celebrated dancing centres of Lord Nataraja, Chidambaram temple is Chittrambalam.

Praying to Lord Nataraja, the first benefit the devotee gains is mental peace. The prayer frees the devotee from any and every health problem. Many pray deeply to gain excellence in arts and a bright future in the field. They also pray for child boon and prosperity.

Lord Shiva is in three forms in Chidambaram, as visible idol form, formless as Akasha or space and form and formless as a Spatika Linga.

What is Chidambara Rahasyam – secret: There is small entrance near Lord Sabanayaka in the Chit Saba. The screen is removed and an arati is offered. There is nothing in a form inside. But there hangs a golden Vilwa garland without a Murthi. The secret is that Lord is here as Akasha which has no beginning or an end. This can be understood only by experience. Of the Panchabhoodha Sthals, Chidambaram belongs to Akasha.

Chit means wisdom. Ambaram means broad open space not measurable. “We have nothing with us” is the lesson from this philosophy.
The reputation of Chidambaram is still greater, because it is here that the hymns of three great Saivite Saints were discovered. They sang thousands of hymns in many Shiva Sthals they visited. Where were they for the use of the devotees? Tirunarayur Nambiandar Nambi and king Tirumurai Kanda Chozhan fell at the feet of Lord Polla Pillayar – Vinayaka to guide them in the matter. With the blessings of Lord Vinayaka, they came to know that all these great spiritual literatures with the signatures of the respective authors are hidden in this temple. They rushed to Chidambaram and worshipped the authors with respectful festivals. They found the palm leaves covered by anthill and mostly consumed by insects. Yet they picked up the available full leaves and saved them. All these invaluable spiritual literatures would have been totally lost but for the painstaking and devout labour of Nambiandar Nambigal and Tirumurai Kanda Chozhan. 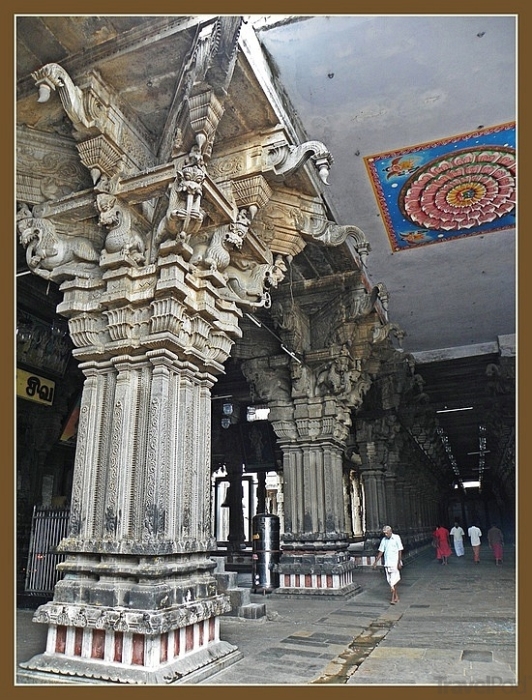 Chidambaram Lord Nataraja probably is the first social reformer. Nandanar, a dalit farm worker was a staunch Shiva devotee. He desired to have the darshan of Lord but could not secure a holiday from his upper caste boss who said that as a low born he was not entitled for the privilege. Nandanar did not lose hope. Naalai Pohalam – Let me go tomorrow – was his hope. After many tomorrows, he finally reached Chidambaram but could not enter the temple due to his community problem. He tried to have the glimpse of Lord, but Nandhi the bull vehicle of Lord Shiva blocked the view. Lord asked Nandhi to move and enabled Nandanar to have his darshan. Nandanar attained salvation here and merged with Lord to the shock and surprise of the upper class.

It is said that the four Saivite Saints entered the temple through the four entrances of the temple, Manickavasagar through the east, Gnanasambandar from south, Appar from west and Sundarar from the north. Appar-Tirunavukkarasar did his Angapradakshina in the car strees (Ratha Veedhi) of Chidambaram.

Saint Manickavasagar cured the dumb daughter of the Buddhist king of Lanka with the blessings of Lord in the temple. There are five Sabhas in the temple – Chittrambalam, Ponnambalam, Perambalam, Niruddha Sabha and Rajatha Sabha. The shrines of Lord Shiva and Lord Vishnu are so structured that the devotee can have twin darshan from one spot in the temple. This is a temple where Brahmma, Vishnu and Rudra grace the devotees together.

Saint Arunagirinathar had praised Lord Muruga of this temple in ten of his Tirupugazh hymns.

Many believe that Lord Nataraja is the presiding deity of this temple. The presiding deity is Adhimoola Nathar in the Linga form. Sages Patanjali and Vyakrapada wished that people of this earth too should have the chance to view and enjoy the great dance of Lord Shiva performed at Mount Kailash. They came to earth and sat in penance on Adhimoolanathar for the purpose. Responding to their selfless penance for the common people, Lord Shiva along with Tri Sahasra Muniswaras – 3000 sages came to this place and granted His dance darshan in Thai month (January-February) on Poosam Star day at 12.00 a.m. These 3000 Muniswaras then came to known as Thillai Moovayiravar.

Chidambaram is a holy place that ensures total salvation to the souls. For salvation, one should have his/her birth at Tiruvarur or live in Kanchi or think of Tiruvannamalai or die in Kasi. If one worships Lords Tirumoolanathar and Nataraja at Chidambaram at least once in life time, salvation is reserved for the soul. Despite strong opposition to Nandanar to enter the temple due to community reasons, he entered the temple with all honours and merged with the Lord. His bhakti-devotion was too deep and true that transcended all blockades of caste discriminations.
Every one in the world, irrespective of race, colour, country, language, religion throng he temple for Lord Nataraja darshan and also participate in pulling the car-rath.

Lord Brahmma organized a yajna and invited the 3000 Muniswaras to join in the pujas. They simply replied that no great soulful gain could be achieved by attending the yajna than the darshan of Nataraja at Thillai Chidambaram. Lord advised them to go and attend the yajna and promised to appear there at the end of the yajna. That form of His appearance in the Brahmma Loka is praised as Rathna Sabapathy. This idol is under the Nataraja idol. Every day, between 10.00 a.m and 11.00 a.m. Arati is shown to Lord Rathna Sabapathi, both at front and back. 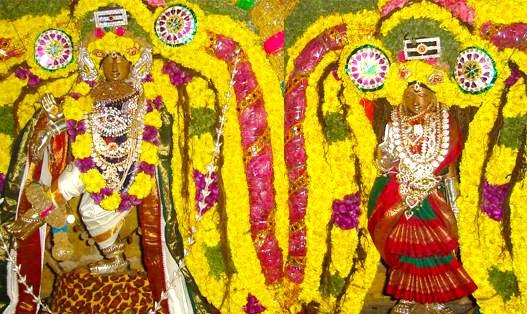 Sri Chakra installed by Acharya Adi Sankara is in the Ambica shrine. The Arthajama puja in the temple has its own significance when, it is believed that all other Gods assemble here for worship. Great Saivite poet Sekkizhar released His magnum Opus Periapuranam in this temple. Saint Arunagiriar had praised Lord Muruga of this temple in his Tirupugazh hymns.

Sage Vasishta, revered as leader of Rishis had a relative Madyandinar by name. He had a son named Maadyandinar (the first name is short in sound, the next longer – spelling differs). Sage Vasishta advised that the boy should worship the Swayambulinga in Thillai Vanam forests for gaining complete spiritual wisdom. Son Maadyandinar reached this place. He was sad that he lost his puja time in picking up flowers after sunrise and these flowers were not pure as the honey in the same are taken away by the bees. He appealed to Lord Shiva saying that he was unable to pick the flowers in darkness due to lack of light and the flowers become unfit if picked after sunrise.

Lord granted him hands and legs as that of a tiger to climb the tree and a bright vision to the eyes functioning well even in utter darkness. Lord also said that he would be known henceforth as Vyakrapada as had the legs as a tiger. Vyakrapada was too happy with the boon and name and continued his worship in Thillai.

Nava Brahma Temples at Alampur, Telangana
Why Do We Wear Tulasi Mala?
Comment