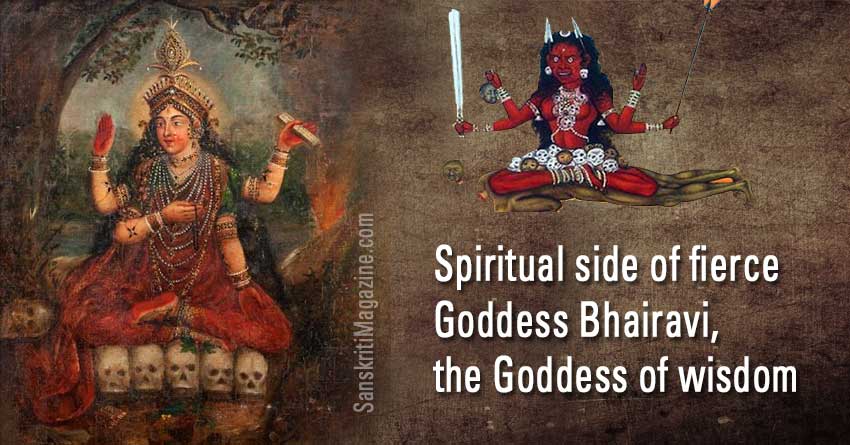 All spiritual phenomena in the universe tread the twin paths of beauty and danger. Goddess Bhairavi is the terrifying aspect of the Dasha Maha Vidya representing divine wrath and anger. With her piercing shrieks and petrifying rage she dispels negative forces that try to curb spiritual growth. Her name itself denotes terror or the one who is awe-inspiring. Although a frighteningly raw energy, she is mankind’s guide and protection. She signifies the proverbial wrath of a mother towards beings that threaten her children.

Goddess Bhairavi’s riveting appearance in the battlefield itself makes the dark forces scatter in pure horror. She glorifies the supreme power of speech, which is empowered by the ferocity of burning fire, Tejas. Goddess Bhairavi depicts the Word in its unarticulated elemental form, which appears as a powerful yet crude sword ready to slay the menacing opposition of evil and ignorance. She is regarded as the Goddess of Sparsha due to her attributes of speech. She is very fond of the contact of her followers and loves elaborate worship. The worship of the Warrior Goddess can be made in the form of five types of offerings.

She embodies the flame of the conscious self (Chidangi) as the supreme power of light and heat, which is the ultimate purified fountain of knowledge. She is the blazing flare in the prime triangle of Muladhara (Trikonantara Deepika), the seven chakras sacred to tantric Hinduism.

Fused with the form of Tejas, the fierce goddess rules over the Tanmantras, the five subtle senses of sensory potentials, corresponding to the linkage between the five organs and the five elements. The Goddess thus denoted the power of life and masters all of its manifestations in beings and in the world at large.

Goddess Bhairavi is depicted as uncontrolled, hissing, gushing power of Kundalini (the fundamental energy whose actions purify souls). She is the latent divinity as the masked Godhead, appealingly illustrated as the sleeping coiled serpent in deep slumber. When awakened or provoked the immobile serpent, starts moving unleashing wild fury, which is unmatched. The Goddess is the maddening of deep joy and ecstasy and is not concerned about serenity. She is linked with the external activity of epic poignant outbursts. The Kundalini seeks to release it self and reserves her energy during tapas or penance, by concentrating passionately and producing the heat of energy. The sincere tapas can enable one to taste the honey-bliss (ambrosia) of immortal delight. The caged animalistic state gives away to incessant blessedness.

Just like Goddess Sri Lalita, she resides in three planes: awareness, existence and eternal bliss. The difference lies in the spectral region of sound that one concentrates upon. She is also sometimes adulated in the form of Goddess Shubhamkari, the one who does good things. In this avatar, she acquires a more benevolent face, where in she is portrayed as holding a book, a rosary while making the mudras of abhaya and varada with her hands. 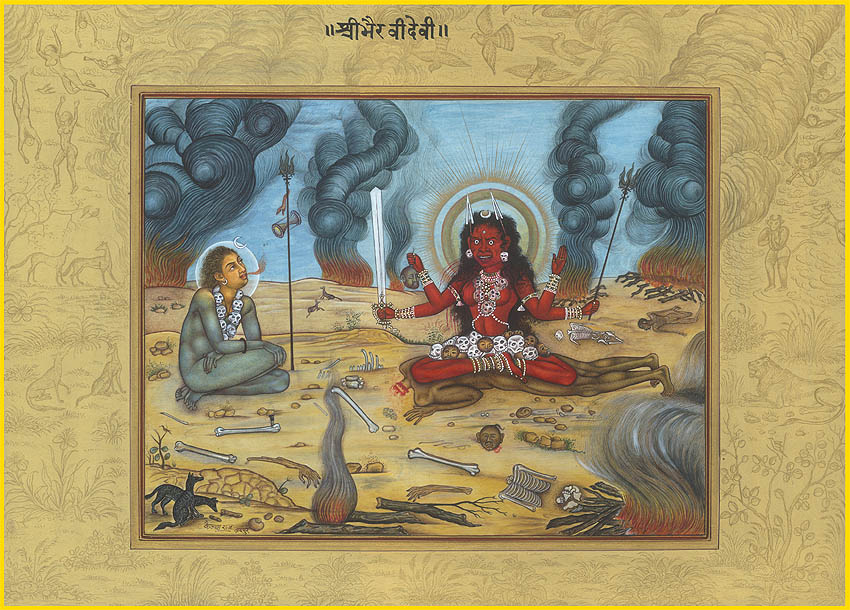 In the Durga Saptashati, there is an interesting tale about Goddess Bhairavi in the form of Chandi. Chandi goes on to kill the wicked demons Shumba and Nishumba, who troubled mankind and the gods. She is also said to have killed and devoured the overlords of the asuras, Chanda and Munda in her most violent form. In the fearful avatar referred to as Chamundeshwari she is depicted with a mouth oozing with blood as she sits atop her loyal vahana, a donkey. 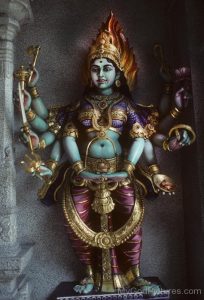 The blood drinking goddess is covered with tiger skin and a skeleton. The reason why she drinks blood is not because of a cannibalistic portrayal but as she wishes to prevent the bloodline of the demons. If their blood trickles on the ground, it will create more horrific demons. Apart from her customary mudras, she also carries with her a trishool or trident, parashu or axe and vajra or thunderbolt, the forces of Lord Shiva, Lord Rudra and Lord Indra. The main mantra to invoke this supreme goddess is the Bhairavi mantra that is ‘Hsraim Hskalarim Hsrsauh’.

When Goddess Bhairavi is inebriated with knowledge, she takes the shape of Goddess Saraswati. In her tamasic form she also has the will to procreate. The fierce goddess sees all men as her lovers and consumes all sins in the fire of her knowledge of non-duality. She becomes Svaha in the delirium of the fire. ‘S’ is for Shakti, ‘va’ for amritam and ‘ha’ for Lord Hari or Shiva. Her consort is Kala Bhairava an equally blood curdling avatar of Lord Shiva. They are together forms of Lord Rudra and Goddess Rudrani.

Like Goddess Tripura Sundari, she is also known as Goddess Tripura Bhairavi, due to her three-city origin. Her manifestation as speech and fire helps cleanse the hearts of devotees, streamlining them towards moksha. She irons put all obstructions in their road to salvation by elevating their inner consciousness. In her aspect of Cahndi, she can invoke great cosmic powers and bring forth prosperity, pleasure and spiritual freedom. She is also Goddess Durga as Mahishasura Mardini, the ten-armed conqueror of the demon Mahishasuras and helps shatter all the negative karma with the strength of potent female goodness. The tantric traditions state that beings go on the path from beastly to beauty. Hence, on cooling down the heat and light of the spiritual fire, Goddess Tripura Bhairavi becomes Goddess Tripura Sundari or Goddess Sri Lalita.

The three-fold aspect of the warrior goddess refers to agni (fire), vidyut (lightening) and surya (sunlight); again she encompasses gods like Lord Agni, Lord Indra and Lord Surya. These entities the superior world reflect the physical, astral and causal universes.

Hence, the fearful mother goddess is in fact the pathway to spiritual bliss and harmony for ardent seekers of knowledge and enlightenment. With the right understanding of her powers and the unfaltering devotion, one can please the goddess to no bounds and be blessed with a bounty of benefits.

Bhagwan Parashurama – Avatar of Lord Vishnu
Why Lord Vishnu is Called as Shunyah or Zero in the Vishnu Sahasranama?
Comment