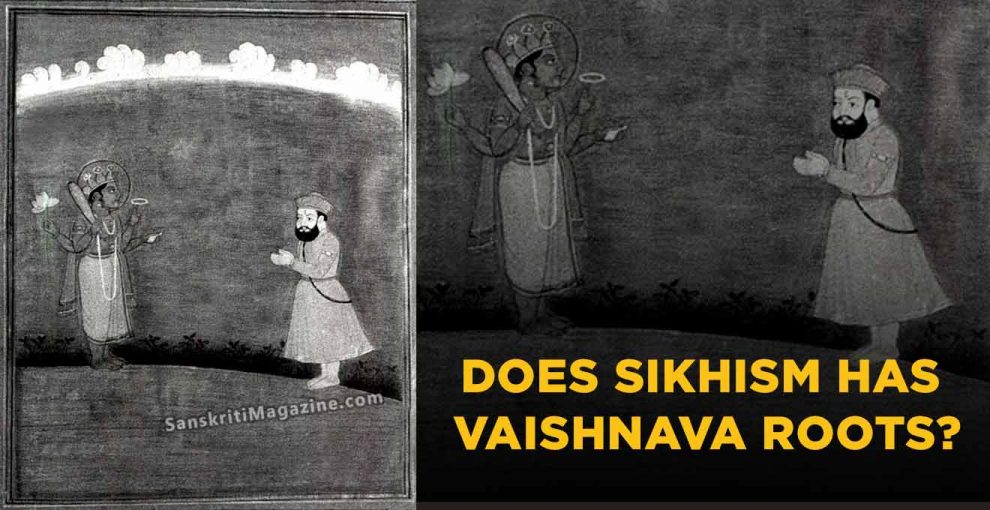 There is an active movement going on today in which orthodox members of the Sikh community are working to protect the sanatana heritage from which their Sikh religion grew. They are challenged by a modern faction of the Sikh community who is accused by them of re-writing Sikh history in a more Abrahamic mood, distancing it from Hindu culture and history, and the Vaisnava roots evident in many texts and paintings that record early Sikhism.

Images like these are taken by many Sikhs as evidence that Sikhism is indeed a panth, or pathway in the sanatana family, although the Hindu roots of the religion are now actively suppressed by historical reformers. The image just below of Nanak worshipping Vishnu is known as a puraatan painting, a rare example of this style of painting that is housed in the collection of Shimla Museum. The puraatan paintings are illustrations to Puraatan Raagis, or Sikh traditional raagas.

The Shri Adi Guru Granthji was written and compiled in accordance with the prescribed Ragas taken from the Sama Veda. This ancient treatise deals with the science of musical notes, ragas, dance and theatre. The Shabads, which are all arranged in chapters in the Shri Adi Granth, bear the names of the Ragas, and each is sung in the specific raga given by the Bhatt Brahmins, who are raagis (classical singers). Further, the Raga for each Shabad or hymn of Adi Granthji is set to a specific numerical rhythmic notation, or tala. This ancient tradition goes back to the Vedic Era, and is primary evidence of the real source of Sikh religion and culture.

Traditional ragas, which express the devotee’s desire to become absorbed in the Supreme Lord, are arranged over a period of twelve months. Singing of the Ragamala is a form of worship which typically precedes an offering of bhog. Today, however, this tradition is also disappearing in Sikh gurudvaras, being replaced with a non-musical chanting or reading of the Banis.

The traditional Naam (mantra) Shabd sung by Sikh musicians in Raga style are now sadly being replaced with contrived tunes — some even set to Bollywood music. This is evidence of the same sort of deterioration of pure Krsna kirtan we find in the modern so-called ‘kirtaniya’ movement of the Bhakti Yoga community. Vociferous beating on tablas and wailing on harmoniums has replaced the refined, skilled Vedic musical offering of traditional ragas, and therefore the devotional mood is being lost.

In the photo above we see a class of schoolboys at Shri Harimandirji, the Sikh equivalent of gurukul at the Golden Temple in Amritsar. The boys are all wearing turbans, in the common style found all over Northern India. In the background there are several Hindus, along with one Brahmin teacher, and some others who haven’t covered their heads.

Orthodox Sikhs dedicated to their sanatana roots take this photo as one of many that help to establish the reality of the Vaisnava presence in Sikh culture. Historical evidence shows that inside the Harimandirji at that time, there were also murtis of Vaisnava deities, which were removed or destroyed by Christian missionaries under the British Raj.

In the far background are visible several Sikh Miri Piri flags, bearing the dhal, kattar and khanda (shield, dagger and emblem). The first two of these symbols are traced back to the paraphernalia of Durga Ma, and again help to establish the Vedic roots of Sikhism.

In traditional paintings, the Gurus never wore turbans, a custom that even according to Sikh teaching itself was only instituted by the tenth and last Guru, Govind Singh, in 1699. All the Gurus are typically shown as wearing a topi (Hindu-style cap) and patka (sash). We discuss one instance.

K.C. Aryan (born 11 August 1919, died 2002), a Partition refugee from West Panjab, was an accomplished painter. He founded the Museum for Tribal and Folk Art in Gurgaon, still functioning today. He saved plenty of old paintings, sculptures and other arts & crafts objects for posterity by collecting them in his museum or donating them to more established institutions.

In 1970, he presented to the publishing unit of Punjabi University Patiala a manuscript with illustrations for a book, 100 Years Survey of Panjab Painting (1841-1941). It was eventually published by the PUP in 1975, but only in mutilated form. The Senate Board of the University objected to the inclusion of one particular painting, and threatened that if it were published, the grant for the whole publishing unit would be stopped.

K.C. Aryan donated the painting in ca. 1982 to the Himachal State Museum in Shimla. There, it is significantly not on display but kept in storage. That is, if it has not been lost or illegally sold by some babu unconcerned with art and heritage; or somehow eliminated by one with Khalistani leanings eager to destroy the evidence for an inconvenient fact: that Guru Nanak was every inch a Hindu.