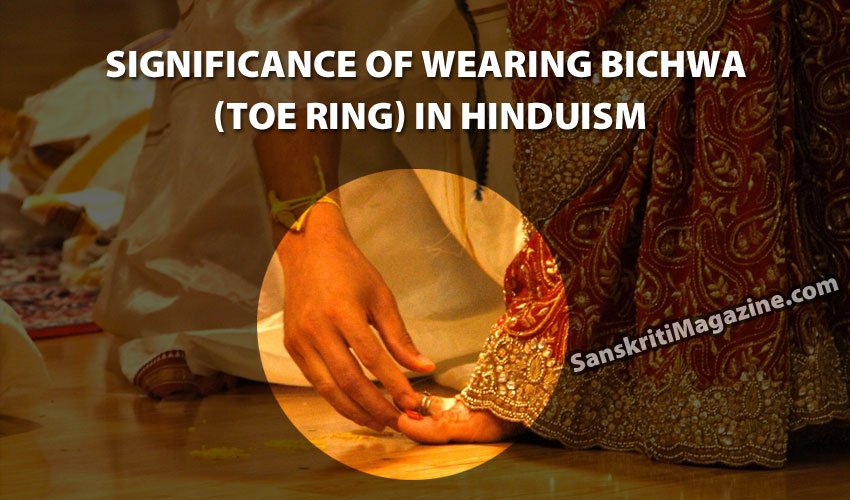 They are usually made of silver and worn in pairs on the second toe of both feet. Traditionally they are quite ornate, though more contemporary designs are now being developed to cater to the modern bride. Some ‘bichiya sets’ may have pairs for four of the five toes, excluding the little pinky.  ‘Bichiyas’ may not be made of gold, as gold holds a ‘respected’ status and may not be worn below the waist. Hindus believe that gold is the metal of the Gods; it symbolizes Lakshmi, the Goddess of Wealth, and therefore considers it inappropriate to wear gold below the waist.

Traditionally a large ring was worn on the great toe of the left foot to indicate a married status. As Toe Rings or Bicchwas were considered to be symbolic of married woman, Hindu religion prohibits unmarried girls from wearing Bichhwas. Even in present times, girls refrain from wearing toe-rings before marriage.Toe rings also symbolize a woman’s dual status as sister and wife. She wears two sets of toe rings on each foot one for her brother and one for her husband. When either the husband or brother dies, one set is removed. The symbolism is that if her husband were to die then her brother would offer her protection.

In great Indian epic called ‘Ramayana’ toe ring plays a vital role. When Sita was abducted by Ravana, on the way, she threw her toe ring (kaniazhi) as the identification for lord Rama. This shows that toe ring is used from ancient time. In Uttar Pradesh and Bihar, bichwa or toe rings is one of the most important symbols of marriage and women are encouraged to decorate each toe with different rings with myriad motifs ranging from paisley, to fish to flowers.

During the Vedic times, Sanskrit texts laid down the concept of sixteen Shringaar or the sixteen traditional accouterments with which every woman could adorn herself.

In South India too, toe rings are a symbol of marriage and women wear a heavy ring on the second toe of each foot

Toe rings are usually adjustable. These rings are seldom closed circles but open hoops so that they could easily be removed. Toe rings usually have a small gap on the bottom of the ring to allow them to slip over the tips of the toe more easily.