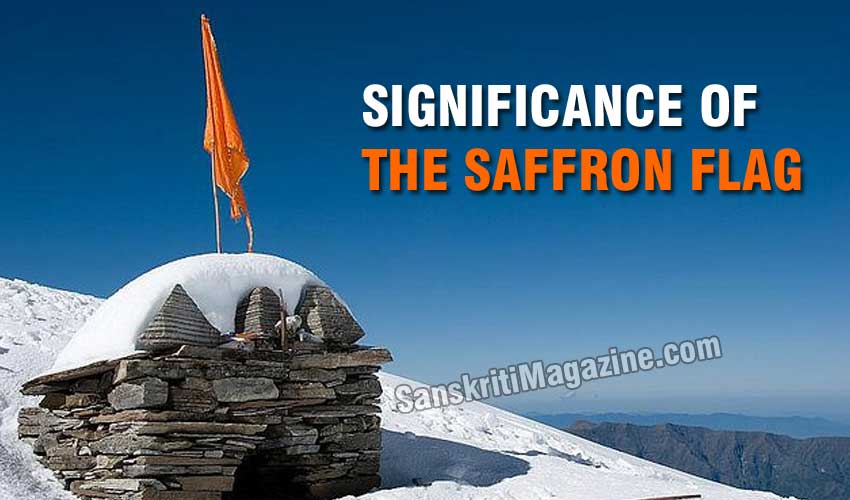 The Bhagwa Dhwaja (Saffron Flag) is the symbol of Sanatana Dharma or Hindu culture from times immemorial. The word ‘Bhagwa’ connotes that it comes from ‘Bhagavan’ meaning God. It stands for wealth, dharma, advancement, glory, knowledge, and detachment. The combination of these six is ‘Bhagwa’. The flag also embodies the glorious orange hue of the rising sun that dispels darkness and sheds light all around.

The saffron (orange) color of the flag is the color of the fire and its flames. The fire is the great purifier and all sacrifices are offered to the fire. It stands for the principle of sacrifice. The color of the flag is the same as the color at sunrise and sunset. When the day dawns the sun rises and reminds everyone to shake off ones lethargy and do one’s duty. The sun burns throughout the day giving life to one and all and without demanding anything in return. The time of sunset teaches us to give everything for the society without any expectation.

The shape of the Dhwaja consists of two triangles, the upper triangle being shorter than the lower one. The triangles represent the rising flames of burning fire. The flames rise in the upward direction, only those rising from the bottom being the longest. They teach us to rise above and become better always.

The Bhagwa flag has existed and guided the Vedic society right from its origin. It has inspired and has been honored by the Vedic Saints and heroes. In ancient times, the warriors used to put on saffron robes and go to the battlefield. If they are victorious, they will rule and if vanquished, they might die on the battlefield and thus go to heaven–such was the motivating force for the heroes.

The people in the ancient times worshipped the Sun because it was the source of energy, light and heat without which life can’t exist. The Bhagwa flag inspires us to live the life full of sublime virtues based on sacrifice, renunciation and service.

Is there really a prophecy about Jesus in the Vedas?
Hindu Wedding Rituals
Comment