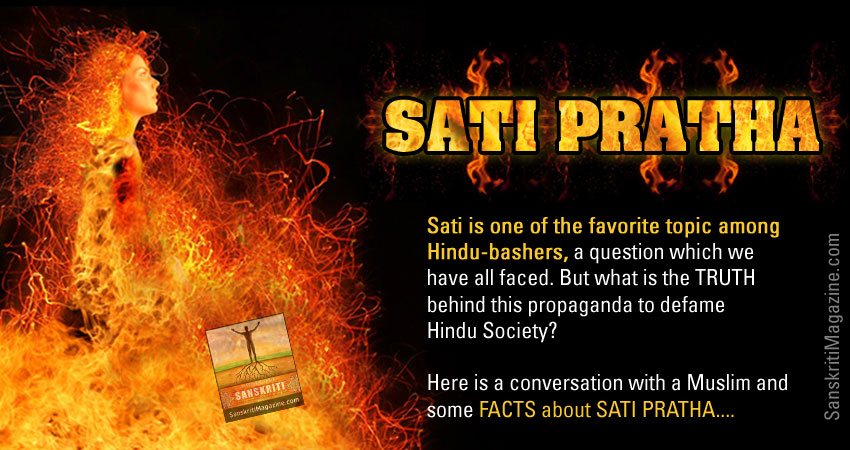 I have met Shahnawaz Husain during a trip to Mumbai. He was my fellow traveler from London to Mumbai. He is now an Indian desi in UK with a very modern outlook. He was talking about superstitions and wrong traditions plaguing India. I have agreed to most of his observations.

“Hinduism is a curse for its women – evil people were practicing SATI everywhere in India till British ruled…” he said. (‘Sati’ is a name given to the custom by the British in which the widow is placed on pyre of deceased husband and burnt alive – it was a barbaric and inhumane act)

“I agree with you regarding SATI. It is highly deplorable. But how come you blame Hinduism for that?”

“So far there is no word in Hindu scripture for “Bride burning”. Sati is the feminine of ‘sat’, means “true”.”

“But Hindus were practicing it and encouraging it, resulting in genocide…”

“Hmm…” I understood that he is yet another misled educated person.”Shahnawaz, Can I ask you a question…”

“Even in modern America (African and many other countries), female genital mutilation (FGM) – also known as female genital cutting and female circumcision – is being practiced among some Muslims. They believe that females have no right to enjoy sexual pleasure….”

“That’s not true…” he raised his voice. His face became red.

“You please get your facts checked. FGM is done in the name of preservation of virginity and reduction of female desire and also to enhance male pleasure. The practice is prevalent in some of the majority Muslim countries. Many girls bleed to death or die of infection – even today”

“But Islamic scholars have two opinions about this – some say no obligatory rules exist while others refer to the mention of female circumcision in the Hadith. I do not know, you tell me…”

“Sir, All Muslims are not practicing it. Don’t blame Muslims or Islam for some people doing wrong things…”

“I totally agree with you. As in any religion, wrong customs are practiced by the ignorant followers.”

“I got your point, Uday. You mean to say that just because few people among billions of Hindus practice it doesn’t mean Hinduism supports Sati…”

“Not only that – Sanatan Dharma is the only tradition in the world that gives equal importance to all without any gender, colour and race discrimination. So how is it possible to force something like Sati on females?”

“Uday, a scholar told me about mentioning of widow’s burning in Rig-Veda?”

“Yes – I have also read about it. Rig Ved, Mandala 10, Chapter 18 mentions about widowed dames. The hymn actually calls for a widow to rise from the pier of her dead husband and now move on to take the hand of her new husband. As in all cases, Hindu-bashers have misinterpreted it into a terrible falsification to signify the burning of the widows to demean Hinduism…”

“Mahabharata, Hindu epic, tells about Madri was burned with her husband Pandu”

“Pandu had another wife – Kunti – why didn’t she die? There are hundreds of characters in Mahabharata. Madri’s case was exceptional. The epic is broader in universality – it shows all evils and good things that had been prevailing in the society during that time. How can you generalize things by a singled-out example? In Ramayana, when Dasaratha died none of his three wives jumped into pyre. There is not even a single case of forceful widow burning in any of our scriptures. The story of Sati and Shiv has nothing to do with Sati Pratha…Sati didn’t die in her Husband’s funeral pyre…”

“Sati is an ancient Sanskrit word, meaning a chaste woman who thinks of no other man than her own husband. The famous examples are Sati Anusuiya, Seelavati, Savitri, Ahilya etc. None of them committed suicide, let alone being forcible burned. So how is that that they are called Sati?”

“But there is proof that Sati was practicing in India…”

“Yes – it began with invaders bearing Muslim names. Please note I am not calling them ‘Muslim invaders’ (as popularly known) as I know that there are good people in all religions. Rape, genocide and gross human rights violations against innocent Hindus induced victims to adopt defensive mechanisms. Hindu women in India adopted the Sati traditions to protect themselves from invaders, who perpetrated the largest holocaust in history against Hindus.”

The barbaric and inhuman invaders did record with glee their genocide on Hindus, because they felt all along that they were doing their duty; that killing, plundering, enslaving and razing Indian temples was justified. It was standard practice for cruel warlords like Ghori and Ghazni to unleash the mass rape and enslavement of hundreds of thousands of women after the slaughter of all peace-loving innocent Hindu males. The tradition of sati, where Hindu women voluntarily cast themselves onto burning cremation grounds after their husbands’ death, gained widespread acceptance during the invasions.

The most famous instance took place when invaders overran Chittorgarh (Chittor) in 1568: rather than submit to the rape and slavery that would follow, eight thousand heroic Hindu women committed sati en masse.

The word “Sati-Pratha” (forcible widow burning) was coined by British and foreign Missionaries in India to de-mean Hindus… Hindus were victims of the crime. This is a typical case of perpetures of crime are glorified and victims are penalized. Just like any other durachara (black magic, astrology, mantravada etc) Sati might have been in practice among some ignorant Hindus.

“Sorry, I didn’t know about these facts. I thought that Sati was part of your Sanatan Dharma”.

“It is NOT. Shahnawaz, Lets absorb good things in all traditions. Things that are not relevant in today’s society are anachara and superstitions. We can’t use violence or force to change this. Our dharma is to learn the truth and teach the truth. When people become aware, they will naturally stop such practices. The historians (un-forgivable criminals) in India have done gross injustice to our culture for fistful of money….” I told him.

THE TRUTH AND FACTS
ABOUT SATI PRATHA

Sati… the mere mention of the word conjures images of widows burning on funeral pyres all across ancient and medieval India, right upto 1829 when it was outlawed by the reforming Britishers, and Raja Ram Mohan Roy. The impression it creates is one of a rampant and widespread practice, and one which was virtually unopposed in the society, much like that far greater social evil – casteism as experienced by SC/ST/OBC people during those times. Our education system drills in the name of Raja Ram Mohan Roy as a social reformer, and the British who voluntarily worked to eradicate it. Well, there were decent Britishers who did campaign against the practice; it is also undisputed fact that Raja Ram Mohan Roy was a reformer. But that is it; rest all is incomplete history. Surprised? I was too, when I read it. But I have read enough of history to recall references to something like this in my history; and a simple Google search completed the rest – and exposed the myth. 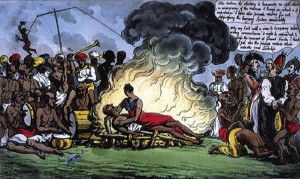 Rewind history to 1813: the reforming noble-hearted great Britishers legalized the practice of Sati. So what you say? Well, that act made them the only (I havent found a single ruler -Aurangzeb included, who legalised this barabarity) ruling power to legalize this. Fast forward to the mid-1800s, when the law was substantially diluted when murder charges could not be laid if the death was caused by own consent.

Furthermore, the official record does not state that Raja Roy initially was against official intervention – even while vociferously campaigning against the barbarity. Neither does the record state the legalization of sati in 1813. I wonder why? The official record makes no mention of a long list of anti-sati campaigners. Neither does it recognize that virtually every Mughal ruler had made strict laws against sati: including Aurangzeb. The first recorded law against this is by Humayun. That effectively puts paid to the “British eradicated sati” claim. They didn’t; it was the result of a centuries-long battle against this social evil directed and campaigned purely by Indians. That is what the entire record shows. So much for the much tom-tommed British claim of sati eradication!

The proof? Simple. These are the precise numbers – documented numbers – of sati cases around 1810-1840. These records very effectively destroy any such claim even without the lecture above.

The British exaggerated it enormously; there is evidence of this. This was since it could be used to justify their rule over us “heathens”. William Carey, the great reformer, wrote : “For the first time during 20 centuries… the waters of the Ganges flowed unblooded to the seas”. It is impossible that the British were not aware of the precise numbers: these figures are from their own records! As further proof: what did they do against the real social evil of the time – the plight of the Harijans? Nothing, that is what. And we Indians still believe in the their fiction, written by the Colonialists to further their own economic agenda…

And this, folks, is the reality of the Sati saga, and the attendant Myth… Please correct your several impressions…

~ Becoming Indian: The Unfinished Revolution of Culture and Identity by Pavan K Varma

Most Dangerous Vices for Humans
Why do we pray to Lord Ganesha first ?
Comment