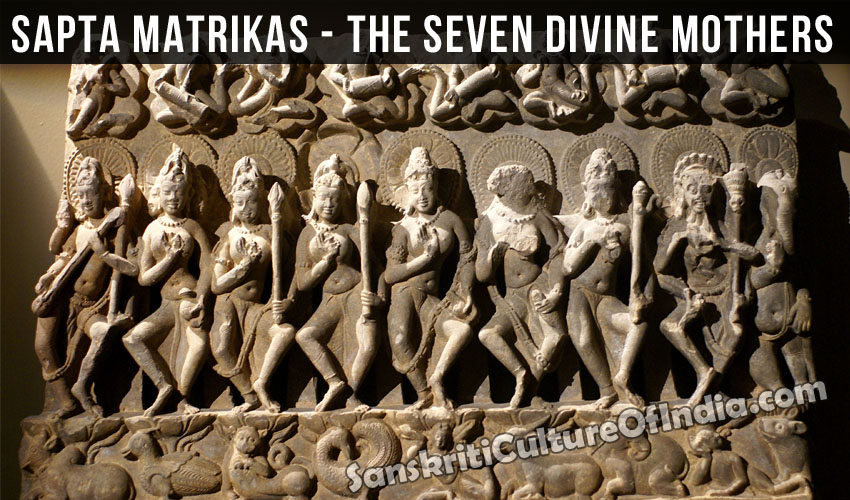 The Sapta Matrikas or the seven divine mothers, representing the saktis, or the energies of the important familiar deities are Brahmani (Saraswati) Mahesvari (Raudani) Kaumari (Karttikeyani) Vaishnavi (Lakshmi) Varahi, Indrani and Chamunda (Chamundi). According to a legend described in the Isanasivagurudevapaddhati, the Matrikas were created to help Lord Siva in his fight against Andhakasura. When Lord Shiva inflicted wounds on Andhaka, blood began to flow profusely from his body. Each drop which touched the ground assumed the shape of another Andhaka. Thus there were innumerable Asuras fighting Siva. To stop the flow of the blood, Siva created a goddess called Yogesvari from the flames issuing out of his mouth. Brahma, Vishnu, Maheswara, Kumara, Varaha, Indra and Yama also sent their saktis to follow Yogesvari in stopping the flow of blood. Thus the Sapta Matrikas originated and Andhakasura finally lost his power and was defeated by Siva.

In the Suprabhedagama, the Matrikas are said to have been created by Brahma in order to kill Nirrita. The Agama literature gives a brief description of these goddesses : that Brahmani should be sculptured like Brahma; Mahesvari like Mahesvara; Vaishnavi like Vishnu; Varahi as a short woman with an angry face and bearing a plough as her weapon; Indrani like Indra and Chamunda as a terrific woman. This lastmentioned goddess should have her hair in a dishevelled condition, should possess a dark complexion and have four hands. She should weild the trisula in one of her hands and carry a kapala in another. All the Matrikas are to be seated images and should have two of their hands held in the Varada and Abhaya poses, while the other two hands carry weapons appropriate to the male counterparts of the female powers.

The Varaha Purana states that these mother-goddesses are eight in number and includes among them the goddess Yogesvari. It further says that these Matrikas represent eight mental qualities which are morally bad. Accordingly, Yogesvari represents kama or desire; Mahesvari, krodh or anger; Vaishnavi, lobha or covetousness; Brahmani, mada or pride; Kaumari moha or illusion; Indrani, matsarya or fault finding; Yami or Chumunda paisunya, that is tale bearing; and Varahi asuya or envy.

The Sapta Matrikas are mentioned in the Rigveda, Gobhilasmriti, Markandeya Purana, Matsya Purana, etc. Varahamihira’s Brihat Samhita also mentions about the images of Sapta Matrikas. The sculptures of the Sapta Matrikas are referred to in the Krityaratnakara. The Devi Purana mentions the name of the flowers used for the worship of Matrikas. Prevalence of the worship of the divine mothers is believed to be as early as 3rd millennium B.C., when the Indus Valley Civilization flourished. The earliest epigraphic reference to the Matrikas is to be found in the Gangadhara inscription of Vishwa Varman, in Malwa Samvat 480 or 423-424 A.D. The Matrikas also figure in the Viharstambha inscription of Skandagupta.

Kadambari mentions that the Matrikas were worshipped in every village. The several Tantra sastras such as Svachhanda Tantra and Yogini Hridaya contain a detailed description of the Sapta Matrikas. As the Matrikas are stated to be sitting in lalitasana posture, they are adorned with heavy ornaments, necklaces and circular ear-rings. From the Sadhana in the Buddhist literature it appears that the Tantric Buddhism had also incorporated the Sapta Matrikas in its religious fold. This is amply corroborated by the discovery of a composite figure of the seven mothers at Nalanda.

A brief description of the Matrikas are given below :

The first Matrika in the series is yellow complexioned and has four faces, three of which are visible in her sculptures, the fourth one is at the back. Two of her arms in varada and abhaya gestures and she carries kamandalu and akashamala in two other hands, She is seated upon a lotus, has hamsa (swan) as her vahana. She wears a yellow garment (pitambara) and her head is adorned with a Karanda Mukuta. Her place is under a palas tree.

Vaishnavi is dark in complexion, carries in one of her hands the chakra and in the corresponding left hand the sankha; her two other hands are held in the abhaya and the varada mudra respectively. She has a lovely face, pretty eyes and she wears a yellow garment. On her head is a Kirita Mukuta. She is adorned with all the ornaments generally worn by Vishnu and the emblem of her banner as well as her vahana is the Garuda. Her place is under a Raja Vriksha. In the Devi Purana, she is represented as possessing four hands in which she carries the sankha, chakra, gada and padma. She wears the vanamala, the characteristic garland of Vishnu.

Indrani has three eyes and four arms; intwo of her hands she carries the vajra and the sakti, the two other hands being respectively held in the varada and abhaya poses. The colour of these goddess is red, and she has on her head a Kirita Makuta. Her vahana as well as the emblem of her banner is elephant, and her abode is under the Kalpaka tree. According to the Vishnudharmottra, she should have a thousand eyes and should be of golden colour and should have six arms. Devi Purana states that she carries the ankusa and vajra only and in the Purva Karanagama it has been mentioned that she has only two eyes and she holds lotus in one of her hands.

Mahesvari is white in complexion, she has three eyes. She has four arms, two of which are in the varada and the abhaya poses, while in the remaining two hands she carries the trisula and akashamala. Her banner as well as the vahana is Nandi (bull); she wears a Jata Makuta.

Kaumari is yellow in complexion and has four hands, in two of which she carries the sakti and the kukkuta, the remaining two hands in the abhaya and the varada poses. Her vahana is the Peacock. Her abode is under a fig tree. According to the Vishnudharamottara, she has six faces and twelve arms, in which she carries the sakti, dhvaja, danda, dhanus, bana, ghanta, padma, patra and parasu. The Devi Purana adds that her garlands are made of red flower and the Purvakarnagama adds that the goddess is so sculptured as to suggest the ideas of valour and courage.

Varahi is dark complexioned, with human body and the face of a boar. She wears on her Orissa Review  head a Karanda Makuta and is adorned with ornaments made of corals. She weilds the hala and the sakti and is seated under a Kalpaka tree. Her vahana as well as the emblem of her banner is the Elephant. The Vishnudharmottara states that she has a big belly and six hands, in four of which she carries the danda, khadga, khetaka and pasa. The Purvakaranagama says that she carries the hala and musala as her weapons. She wears on her legs nupuras (anklets).

Goddess Chamunda has four arms, two of which are in the varada and abhaya poses and in the other two hands she carries the kapala (skull) and the trisula. The Devi is destroyed the two demons, Chanda and Munda. She has a very emaciated body, aunken belly and a terrifying face with a grin. She wears a garland of skulls. Her garment is the tiger skin and her abode is under fig tree. As the mother goddess she is the fertility aspect of Durga. She has been praised as the tutelary goddess of Vindhya Mountains. She has a very heavy Jata Makuta. In the Purva Karanagama it is mentioned that she should have her mouth open and should wear on her head the digit of the moon as Siva does, that her vahana is an owl and the emblem of her banner is an eagle. In one of the left hands she carries the kapala which is filled with lumps of flesh, and in another left hand she holds a snake. She wears in her ears kundalas made of conch-shell.

The sculpturing of the Sapta Matrika group of goddesses found in the cave temple of Ellora conform largely to the description given above. They, however differ in few points. For instance the group is invariably made of seven mothers flanked on either side by Virabhadra who is seen playing upon a vina and Vinayaka. There are some blood-thirsty ghosts surrounding Chamunda.

A stone slab of the early Kushana period, from Dhanagaon near Mathura now in the Mathura Museum, represents the Matrikas as ordinary females without any distinguishing symbol or vehicle. In Orissa certain varieties of the Matrika figures in developed forms have been found. An early group of Sapta Matrikas with the two associates, Genesa and Virabhadra are found on the northern wall of the Parasuramesvara temple (605 A.D.) at Bhubaneswar. The ceiling of the Jagamohana of the Muktesvara temple also contains beautiful figures of the Sapta Matrika, each occupying one of the petals of the eight petalled lotus at the center conceived in the form of a canopy. These figures constitute a group of the Sapta Matrikas with Viresvara. In the inner walls of Vaital deula there are a group of Sapta Matrikas headed by Viresvara, with the largest image of Chamunda which is the presiding deity of the shrine. A group of Matrika images like Vaishnavi, Varahi, Indrani and Chamunda found in the Orissa State Museum. All the Matrikas are seat in Lalita attitude. An interesting relief in the Orissa State Museum, bearing the figures of the Matrikas, depicts Chamunda having emaciated body, sunken belly, wearing a garland of skull and seated in an easy posture, on a prostrate human being.

There is an interesting Saptamatrika panel in the Allahabad Museum. They were found at Gorgi in the Rewa dist of Madhya Pradesh. All the seven divine mothers along with Virabhadra and Ganesa have been rendered as dancing vigorously.

Can War Be Justified ?
The Hymn of Creation: Nasadiya Sukta
Comment