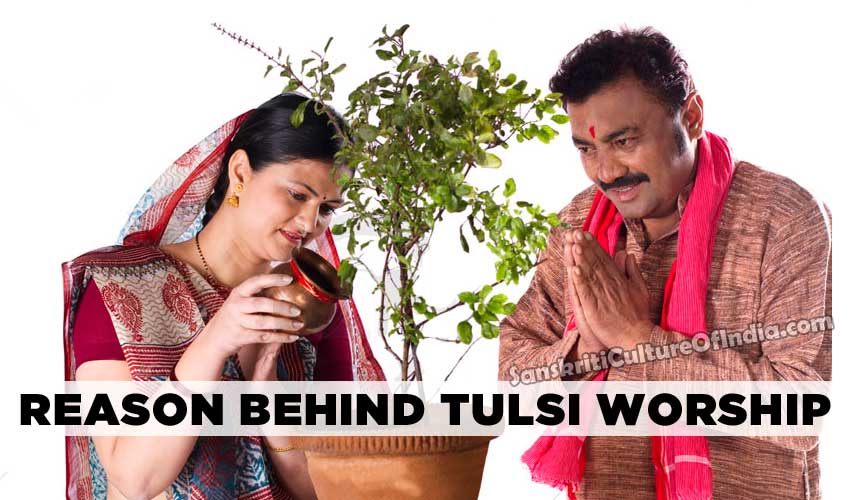 “Tulasi is auspicious in all respects. Simply by seeing, simply by touching, simply by remembering, simply by praying to, simply by bowing before, simply by hearing about, or simply by sowing this tree, there is always auspiciousness. Anyone who comes in touch with the Tulasi tree in the abovementioned ways lives eternally in the spiritual world.”

—Srila Prabhupada, The Nectar of Devotion

Indian basil or Tulsi as it is commonly called, is an important symbol in the Hindu tradition. The followers of Vishnu who are called Vaishnavaites, worship Tulsi and tend to it carefully, believing it to be sacred as God’s representative on earth.

There are two types of Tulsi plants. The dark one called Shyama Tulsi possesses greater medicinal value than the light one called Rama tulsi. It is the Shyama Tulsi that is commonly used for worship by the devout. In fact, a Hindu household is considered incomplete if it did not have a tulsi plant in the courtyard of the house. Tulsi is normally planted on either a small mound of soil or on a square brick pillar, which has images of deities installed on all four of its sides. The name of this mound is usually called Vrindavana or the abode of Lord Krishna.

It is believed that nothing on earth can equal to the virtues of Tulsi, being the only plant that is regarded as self-purifying. With this in mind, Tulsi is washed and reused in puja without creating any impurity.

There are many myths and legends found in ancient scriptures that regard Tulsi as sacred and point to its importance in religious rituals. One legend is that when Lord Krishna was weighed in gold by Satyabhama against all her legendary wealth, the scales did not balance until a single Tulsi leaf was placed on the pan by Rukmani with devotion.

Another legend symbolizes Goddess Lakshmi as Tulsi and those who wish to live a righteous and happy family life worship the plant.

In an annual ritual called “Tulsi Vivaha”, Tulsi is married to Lord Vishnu on the 11th day of Karttika according to the Hindu lunar calendar. This usually falls in mid October and inaugurates the marriage season in India.

When a person is dying, leaves or spray of Tulsi plant is placed on his face, eyes, ears and chest. He is then sprinkled from head to foot with a twig of Tulsi that has been dipped in water for purification of body in hopes of removing all sins and ending the cycle of rebirth.

Presenting a twig of Tulsi to someone who may be suffering from anxiety or stress is supposed to eliminate his worries.

In the ritual of consecration of Kalasha, Tulsi is accorded sixth place among eight objects of worship.

Besides its religious significance, Tulsi is respected for its valuable medicinal properties in Ayurveda, the ancient art of natural medicine. All parts of the plant are used to cure various ailments.

Significance of Yantras in Hinduism
Why We Don’t Blow Off Candles, Diya, Incense
Comment