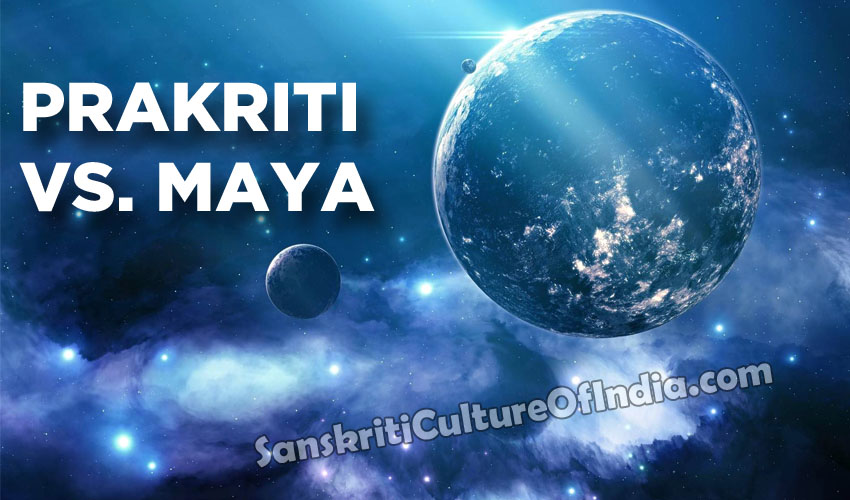 In this way, Ramanuja’s description of Parkriti differs from the explanation of Maya put forward by Samakara. This distinction will be clear from the following table:

1. Prakriti is real. It is not unreal and indeterminate.

3. The statements ostensibly deny­ing the reality of the world means only this that there is one Brahman at the root of all mul­tiplicity, not that the world does not exist.

4. Prakriti is the unconscious ele­ments present in Ishwara. It ex­ists in subtle seed form, and it is with this that Ishwara creates the Universe. It is the real or actual product of the uncon­scious element.

5. The unconscious element exist­ing in God is susceptible to dis­tortion (hence in Ishwara also) and this is real.

6. Prakriti itself appears in the form of its past remaining ele­ments and the entire universe is pervaded by it.

7. According to Parinamavada, Prakriti actually changes into the world.

1. Maya is indeterminate. It is neither real nor unreal.

2. Knowledge of Maya as the universe is illusory, not real.

3. According to this statement of the Upanishads, multiplicity is unreal.

4. Maya is the power of Ishwara. It does not exist in Ishwara in seed form. It is merely His desire or wish.

5. The power of the creation appears to be prakriti of the world only to those persons who see it as the world and not its fundamental Brahman nature.

6. The universe itself is not Maya. Maya is not transformed or changed, but it is only the magical power of Ishwara, which due to ignorance, reflects Brahman in the form of the universe.

7. According to Vivartavada, Maya is the object of intuition. The universe is the illusion of Brahman.